During the event, Intercos’ Dario Ferrari was awarded by the University of Ferrara for his contribution to the cosmetic industry.

The Cosmetica Italia assembly in Milan.

MILAN — “The time is ripe to be represented alongside the other Made-in-Italy excellences,” said Cosmetica Italia president Renato Ancorotti during his speech opening the association’s public assembly on Thursday.

Held at the city’s frescoed Palazzo Clerici, the event marked the first anniversary since Ancorotti’s appointment at the helm the Italian association of cosmetics companies.

Since the beginning, the president aimed to affirm the importance of the cosmetic industry for the country’s overall economy and promote its internalization. At the assembly, he reiterated that “reputation, representation and internalization” are still the three key assets his strategy is centered on.

“We need to free ourselves from the ‘ugly duckling’ syndrome. The consumption of cosmetic goods is part of the daily gestures improving people’s quality of life,” he said.

To support his point, Ancorotti highlighted Italian cosmetic companies’ contribution in the overall domestic economy, reminding that in 2018 the industry registered sales of 11.2 billion euros, up 2 percent compared with the previous year. As reported, data released by the association forecast a further 2.6 percent growth for this year.

Export was the key driver, increasing 3.5 percent to 4.8 billion euros. As a result, the trade balance surpassed the record amount of 2.7 billion euros in 2019.

In terms of internalization, Cosmetica Italia is implementing programs to promote the local beauty industry across the world, including in the U.S. through the “Beauty Made in Italy” project.

During the event, the organization released its ninth beauty report, assembled with Rome’s Ermeneia research center.

The annual study focused on investigating the increasing relationship beauty companies have with digitization and disintermediation of sales. According to the research, 74 percent of the interviewed firms think that e-commerce is a useful channel to add to traditional ones to increase sales and raise brand awareness, while 60 percent said they’re already changing their company structures in terms of digitization, which is seen as a booster of efficiency and competitiveness due to the interconnection of plants, employees and information.

“Italian beauty companies are very responsive, also due to the fact they constantly invest in innovation, even in difficult times,” said Ermeneia president Nadio Delai, citing “their direct bond with consumers” as key asset. Incidentally, data show beauty players invest an average of 7 percent of their revenues annually — twice as much as national companies operating in other industries.

Strategy and marketing professor at Milan’s Politecnico university Giuliano Noci took the disintermediation talk a step further, urging entrepreneurs not to invest on e-commerce and beauty innovation only.

“You have a great ability to read the market’s trends and translate them in successful innovation through research and development processes but, as in many industrial sectors, there’s a threat: the product is necessary, but not sufficient condition to have success today,” said Noci. “Take Amazon: its value doesn’t lie in the products it offers, but in its skills to provide answers to people. So your investments shouldn’t focus on products only but on entering in people’s life, be the right answer at the right time.”

For the professor, the relationship brands will have with customers will make the real difference in the future, while the product will be just a tool to offer them answers. “So [companies] should invest in knowing the individuals otherwise there will be players operating in fields apparently far from the beauty world that will enter in this industry to capitalize on such a knowledge,” said Noci.

In this perspective, the brand is more important than ever, according to the professor. “Everybody is thinking short term when building a brand, but the real goal is to think long-term to positively occupy a space in people’s minds, by creating a trustful relationship with individuals. In the future a successful label will be considered a real friend for one’s needs, an attitude that will zero the competition in terms of prices because this will be the real needle in people’s shopping behavior.”

According to Noci, all these elements will cause a change in companies’ business models. “They won’t sell makeup or skin care anymore, but subscriptions, a set of products and services aligned with each individual’s need,” he concluded, telling the entrepreneurs in the audience that “the customer intimacy should become your new mantra.”

“I believe our industry is already ahead in the customer intimacy discussion,” Edoardo Bernardi, chief executive officer and general director of The Estée Lauder Cos. Italia, replied in a following panel.

The executive pointed to how the concept is rooted in the firm’s DNA as “our founder had direct relationships with her Fifth Avenue clients.”

The online channel has helped continue this legacy, according to Bernardi. “We see the digital platform as an extraordinary opportunity to amplify the word of mouth,” he said, adding that it’s also a tool “for prestige brands, which had lost the contact with the customers, to get back in creating a dialogue, also through testimonials and personalities who know how to communicate with consumers.” 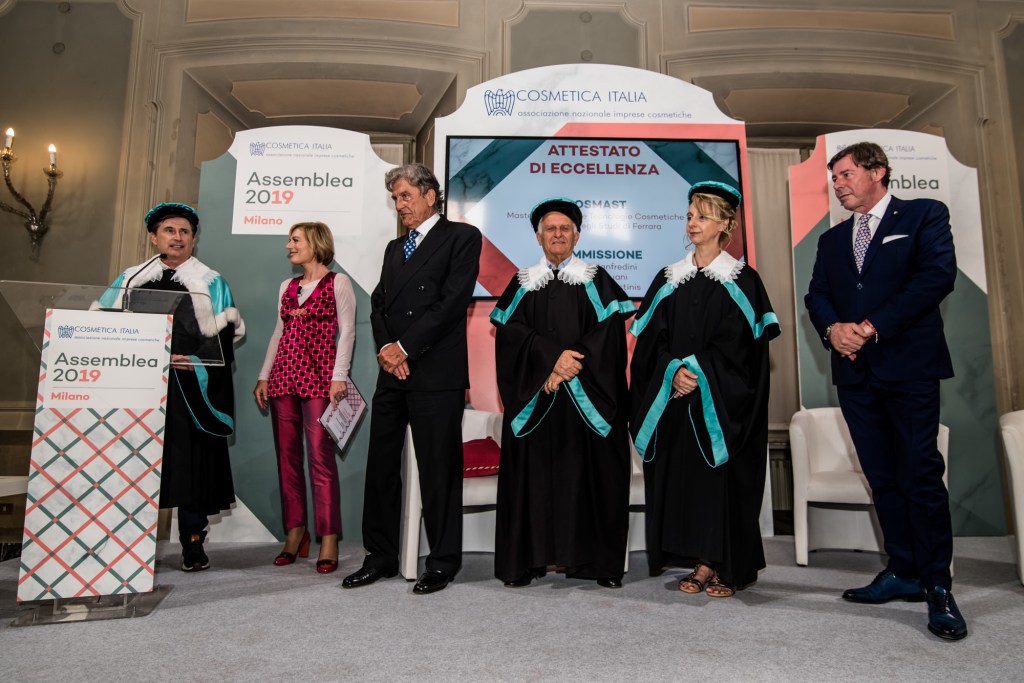 Dario Ferrari was awarded by the University of Ferrara for his contribution to the cosmetic industry.  Courtesy Photo/Elena Di Vincenzo

Among the attendees at the assembly, the chairman of the industry’s dominant cosmetics supplier Intercos, Dario Ferrari, was awarded with the Certificate of Excellency by Cosmast, the master’s degree in science and technology of cosmetic products of the Università degli Studi of Ferrara, in the Italian region of Emilia-Romagna.

“This is the first time we award someone who isn’t part of the academy,” said professor Stefano Manfredi, director of the Cosmast master, before giving the certificate. “This is no award for research but for innovation; not for someone who asked himself ‘Why?’ but ‘Why not?,’ which marks the difference between inventors and innovators.”