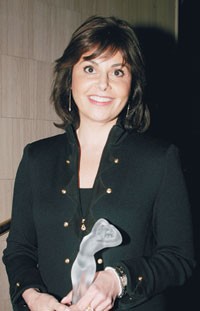 NEW YORK — Winners of last Friday’s Cosmetics Executive Women Beauty Awards are finding that they didn’t just tote home a Lalique statue — they left with a seal of approval, which retailers plan to use in-store to drive sales.

“We’re about bringing new innovation and new technology into our stores, and that is a value we share with CEW,” said Andrews, who added that CVS will highlight the program in-store in several different ways. Some products will get a seal put on the bottle itself; in other instances, there will be shelf talkers highlighting winners, and in others still, there will be endcaps featuring the award winners, he explained.

As well, Andrews said, winners will be highlighted in CVS’ advertising circulars, which top more than 38 million weekly. “We’ve had an association with CEW for the past several years and we believe that this partnership brings awareness and recognition about our channel of trade to the beauty business,” added Andrews. “This year, we’re taking it to the next level and bringing consumers into the mix.”

Katie O’Reilly, merchandise manager for cosmetics and fragrances for Federated’s Macy’s Merchandising Group, noted that the chain also is formulating plans to highlight award winners in-store. Definite plans have been made for all 342 of the chain’s Macy’s doors and other plans are in formation, she added. “We’ll have a monthlong program to honor the winners in Macy’s doors post-Mother’s Day,” she said.

While she wouldn’t reveal all of the details, blow-up posters of CEW’s newly redesigned winner’s seal and counter displays are being planned. “The awards bring an insider’s credibility to the counter, which consumers really respond to,” added O’Reilly. “We strongly believe in the program, and we think consumers will, too.”

As well, Flirt, the BeautyBank-designed brand that is currently sold exclusively in Kohl’s, said this week that it plans to highlight on packaging its win as Best Makeup Face Product Under $15 for Flirt Rollerblush Portable Blush Papers.

But while the retailers were all about what the awards would bring to counter, the awards ceremony itself was as rollicking a celebration as the industry has seen lately, hosted by stand-up comic Mario Cantone, of HBO’s “Sex and the City.” Cantone didn’t hold back with the wisecracks, at one point exhorting the Lancôme crew to add “some crystal meth” to the champagne celebration in the conference room that exec Nina White had promised, and at another point, urging everyone “except Avon!” to send him product.

Back at his table, MAC’s acting president, Joe Spellman, was fighting off a passel of jubilant MAC executives. After MAC won its fourth award of the afternoon, Caroline Geerlings, senior vice president of marketing for the brand, jokingly asked for a raise from the stage.

“This is the most expensive lunch I’ve ever been to,” Spellman cracked.