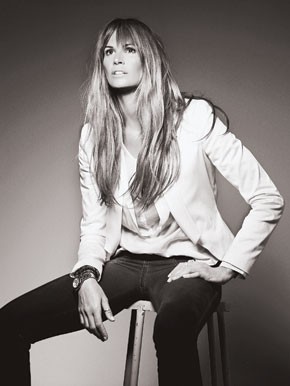 As part of the multiyear contract, Macpherson is to appear in global advertising campaigns, in addition to participating in company-sponsored philanthropic activities. Revlon noted it has donated more than $65 million to research, counseling and outreach programs to support women’s health and breast cancer programs. The firm did not disclose further details on the contract with Macpherson.

“She is a talented model, entrepreneur, actress and mother, which fits in with Revlon’s brand values,” said Chris Elshaw, executive vice president and general manager of Revlon’s U.S. region. Elshaw noted that Macpherson will represent a number of products across the company’s portfolio.

“Along with being committed to women’s issues,” added Elshaw, “she’s also globally recognized and that was an important link for us to have, since we are a global brand.”

“I am proud to join Revlon in its celebration of women and in its long-term commitment and support for education and research to advance women’s health and particularly to fight women’s cancers,” stated Macpherson, who has her own innerwear line.

Macpherson, whose idyllic form earned her the nickname “The Body,” has previously partnered with beauty brands such as Australia-based ModelCo, where she promoted Erase Those Fine Lines, an antiaging serum the firm launched in fall 2006, and with L’Oréal-owned Biotherm, for which Macpherson appeared in advertising in the late Eighties.

MILAN — Selective Beauty is aiming to bolster its presence on the global beauty scene with an aggressive growth plan for the Italian market.

The firm, which produces and distributes fragrances, sees untapped potential in Italy, where it hopes to increase sales this year by 30 percent over revenues of 45 million euros, or $61.7 million at average exchange, in 2007.

“The Italian beauty market is in a difficult phase right now,” said Roberto Tedeschi, chief executive officer of Selective Beauty Italy. “It’s had to relook inside of itself to become stronger, but we see some retailers really breaking out and wanting to offer something different.”

Tedeschi cited Acqua e Sapone, a chain of 500 drugstores founded in 1992, and Upim, a chain of 140 medium-priced department stores, both of which have plans to open high-end perfumeries in key branches.

Selective Beauty distributes 24 brands on the Italian market, in perfumery, masstige and herbal store channels. Its best-selling brands in Italy include MaxMara, Trussardi and Burberry — for which Selective Beauty holds the distribution license in Italy.

All three brands will launch new fragrances in spring, starting with Burberry’s latest scent, called The Beat, which is set to hit shelves in 1,500 points of sale in Italy at the end of this month. Trussardi’s eau de cologne Essenza del Tempo will follow in mid-April in the same number of doors.

MaxMara, another of Selective Beauty’s licenses, launched its first fragrance co-created with Selective. The scent, called MaxMara Le Parfum, reached 1,500 Italian doors earlier this month. “We have very high expectations for the fragrance because it is an Italian fashion house and because retailers here really liked the scent,” noted Tedeschi.

Meanwhile, Selective Beauty expanded Breeze 1962, a historic Italian deodorant brand it owns, to include four Acqua Profumata, or fresh-scented water fragrances, inspired by Italian vacation destinations like Capri and Tuscany. The Breeze 1962 Acqua Profumata line will be on shelves in some 5,000 doors in the Italian masstige and drugstore channels.