NEW YORK — With an ambitious roll-out of their Israel-based Sabon stores, childhood chums Avi Piatok and Sharon Hasson are attempting to make a solid splash in the U.S. bath and body market. Piatok, who founded Sabon in 1997, and Hasson, who... 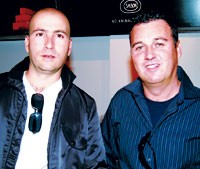 NEW YORK — With an ambitious roll-out of their Israel-based Sabon stores, childhood chums Avi Piatok and Sharon Hasson are attempting to make a solid splash in the U.S. bath and body market. Piatok, who founded Sabon in 1997, and Hasson, who relocated to New York from Israel in 2002 to oversee U.S. operations, were both on hand this week to christen their second Manhattan outpost. An 1,100-square-foot shop located at 2052 Broadway, it’s the uptown counterpart to the first New York Sabon store, situated at 434 Sixth Avenue in the West Village.

Outfitted with dark wood floors, a sparkling crystal chandelier and a massive cast-iron “urn” reworked as a sink parked smack in the middle of the selling floor, the new store’s decor is a perfect setting for Sabon’s rough-hewn luxury. A range comprising bar and liquid soaps, bath and body, several facial treatment stockkeeping units, household items and gifts, the line has a decidedly earthy feel. Largely based on essential oils and botanical extracts from the Israeli countryside and the Dead Sea, there are 25 items in total, each offered in an array of scents. Price points range from $5 for a bar of soap to $35 for Body Scrub. According to Piatok, bestsellers include Body Scrub, Body-Oil Spray and Butter Cream.

Originally trained as a computer engineer, Piatok developed an interest in soapmaking about 10 years ago. Learning the craft from an Australian soap expert based in Tel Aviv, Piatok developed the chunky, handmade products, which are available by the pound and are divided into three broad categories: Olive Oil, Glycerin and Loofah. To the uninitiated, however, the Olive Oil umbrella soap category can be a bit of a misnomer. Not only do these soaps contain a number of other oils and herbs, they’re also offered in Mud, Calendula & Jojoba, Geranium, Rosemary, Lemon and Cinnamon formulas, to name just a few.

The slightly ad hoc, uncorporate approach to line organization underscores Sabon’s do-it-on-their-own-terms credo. Although Piatok and Hasson intend to pursue global expansion aggressively, they made sure to secure their standing on their home turf first, opening 21 Sabon stores in Israel in the past five years. There are now also three stores in Romania, two in Poland and one in the Netherlands.

For the foreseeable future, the expansion focus will be squarely on the American market; a Sabon store is slated to open in the Brentwood section of Los Angeles next month, followed by a unit in Chicago by year-end. “It’s going well here,” said Piatok. “Our business is growing and growing. People like the product and come back to the store often.”

“The American reaction has been great,” added Hasson. “Lots of celebs in the store. Lots of coverage in magazines like People and Vogue. And we have a list of about 80 or 90 people on the waiting list to franchise.” (Note to celeb-watchers: Susan Sarandon, Gisele Bündchen and Robert Downey, Jr. have all been spotted in the Sixth Avenue store.)

“Our vision is to open about 100 franchises or company-owned stores in the next four years,” said Piatok, who declined to reveal Sabon’s total global turnover.

According to Hasson, 15 of those projected units will be in Manhattan. “We’re in the process of planning stores in SoHo and on the Upper East Side right now,” he said. “It’s looking good.”