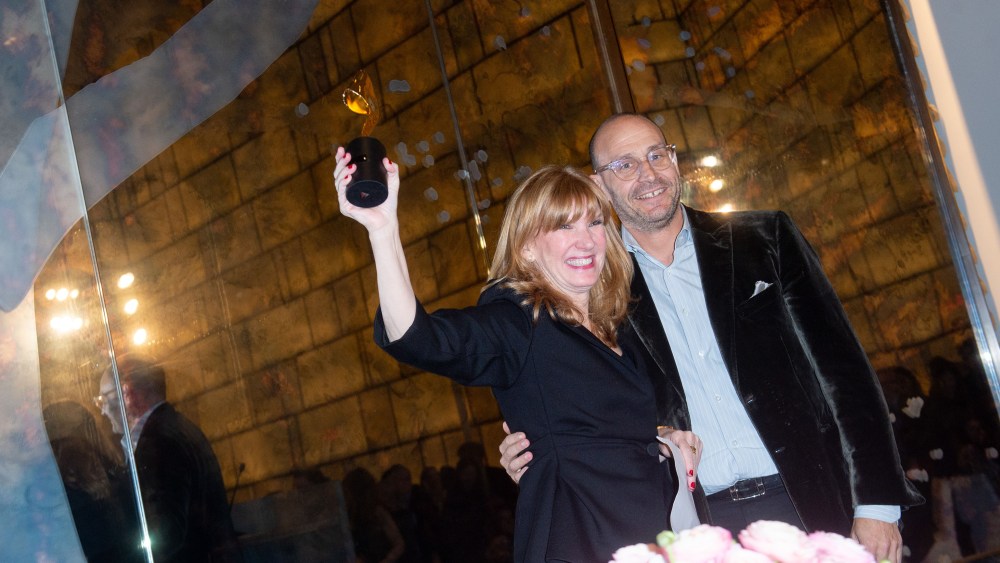 The senior vice president and general merchandise manager and general manager of Saks Fifth Avenue recently began building up her presence on the social media platform, according to friends and colleagues who lightly roasted her at The Fragrance Foundation’s Circle of Champions celebration Thursday.

Oldham, who was described as a “master of GSD” (getting s–t done) by Nicholas Munafo, president North America, LVMH fragrance brands and Givenchy Beauty, is the latest member of the fragrance community to be inducted into the Circle of Champions. On Thursday, former honorees and other members of the community, including Nicolas Mirzayantz, divisional ceo of scent at International Flavors & Fragrances; Cos Policastro, formerly of Givaudan; Annette Green, who had a 40-year fragrance career, and Pamela Baxter, co-ceo of Bonafide Beauty Labs, plus Oldham’s son, Luke, turned out to celebrate.

“Fragrance is one of the most intimate and personal categories at Saks. It’s vitally important as a way to connect with our loyal customers, but also the aspirational customers. Sometimes it’s the first time they’ve bought a fragrance. When fragrance is working, the whole store is working,” Oldham said.

She took the crowd through her years at Saks and how the commitment to fragrance did not extend to the celebrity fragrance craze — except for when it came to the Sean John Unforgivable launch. “I think we all did it because we wanted to meet him,” Oldham said.

“While the rest of the world went all in on the celebrities, we discovered the niche fragrance category.” It allowed Saks to help build brands, customer by customer, Oldham said.

Building was one key thing her friends said about her during the course of the night, when they weren’t plugging her Instagram account.

“Saks has had its leadership position for a long time.…Kate just has cemented that, with what she’s done and how she’s led,” said Marc Metrick, president of Saks Fifth Avenue. He described Oldham as fragrance franchise builder for lines like Jo Malone London, By Kilian and Ex Nihilo. “She actually made the decision by herself to move beauty and fragrance to the second floor,” he said.

“Her passion for fragrance and building true innovation in the challenging world of fragrance retail is admired and respected,” said Jerry Vittoria, head of fine fragrance at Firmenich.

“She believes in brand-building and she loves the beauty community,” said Linda Levy, president of The Fragrance Foundation.

He described Oldham as family — and launched into a series of things the audience may not have known about Kate. “First, she wanted me to repeat, she wants Instagram followers,” Metrick said. Then he disclosed a separate fashion moment — “the tracksuit phase,” he called it. “Kate bought a lot of tracksuits in the early Nineties.”

Her fashion choices were another theme of the evening’s roast. Both Metrick and Peggy Elsrode, senior vice president of luxury for North America at Coty Inc., recalled one of Oldham’s outfits, worn at a fragrance event in Queens a few years ago.

Elsrode described the look: a bright rainbow-striped sweater with a cat on it — “not a little cat, this was a big angry cat that took up three-quarters of the sweater.” Plus, a flower crown. “I remember thinking, wow — Kate really commits,” Elsrode said.

She continued to describe Oldham’s commitment to integrity, directness, respect and a good margarita.

“Kate is warm, kind, loyal and approachable,” said Munafo. “If you’ve ever gotten a five-word e-mail from Kate 15 seconds after you send her an e-mail, you know that she does get things done, and you understand and appreciate her no-nonsense approach and her ability to resolve any problem quickly — i.e., the entire renovation of Fifth Avenue.”

“Instagram is her latest obsession,” Munafo noted. As of 4 p.m. Thursday, she was at 681 followers. But after the evening’s event, on Friday, she was up to 713.