“They give their talent, heart and soul to those in need — lawyers who could earn much more at law firms, but who instead sacrifice those personal financial rewards to help the most vulnerable New Yorkers — victims of domestic abuse, children and those in need of housing, food and the other most basic elements of life.”

For their professional achievements and humanitarianism, Moss, along with Marc Wolinsky, litigation partner at Wachtell, Lipton, Rosen & Katz, were honored with the Legal Aid Society’s Servant of Justice award. The event drew 850 guests and raised $4 million for the Legal Aid Society’s Civil Practice, which represents approximately 128,000 New Yorkers including senior citizens, the disabled, survivors of domestic violence, immigrants, low-wage workers, those with HIV/AIDS and the homeless. 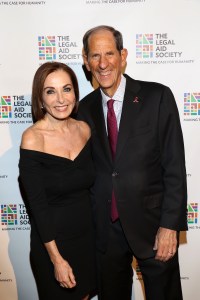 Wolinsky joined Wachtell Lipton after clerking for Judge Henry J. Friendly of the U.S. Court of Appeals for the Second Circuit. His practice includes corporate governance, contracts, antitrust, insurance and securities litigation and has served as the firm’s pro-bono coordinator for more than a decade. He has argued appeals in the D.C. Circuit, the New York Court of Appeals and the Appellate Divisions of the New York State Supreme Court and has litigated in state, federal and bankruptcy courts around the country. Wolinsky’s pro-bono work included representing Joseph Steffan in his challenge to the ban on the service of gay men and women in the military, and he successfully got reversed the manslaughter conviction of Anthony Oddone in the New York Court of Appeals, among other accomplishments.

Aside from her job at Lauder, Moss is vice chair of the board of the Legal Aid Society, serves on the boards of New York University Law School, the New York Common Pantry, the MAC AIDS Fund and The Estée Lauder Cos. Charitable Foundation, and is married to Michael Gould, former Bloomingdale’s chairman and chief executive officer.

In her speech, Moss recounted teachings from her parents; her father a World War II veteran who marched in Selma, Ala., with Martin Luther King Jr., and her mother, who gave $25 every year to Planned Parenthood, which was all she could afford. “These are the values that led me to pursue a career in the law.” Other role models in her life include Constance Baker Motley, the judge she clerked for who wrote the original complaint in Brown v. Board of Education and led the legal fight to desegregate the University of Georgia and the University of Mississippi; Mary Jo White, the longest-serving U.S. Attorney for the Southern District of New York (and still the only woman) and most recently chair of the SEC, and Ginger Worden, her first office mate at Davis Polk, who went on to devote her life to feeding the homeless and rebuilding Newark.