Sarah Rutson and Lena Xiao believe they have a cure for the “mask-ne” that ails you.

Clinical Reset has been in the works for about a year. Its launch comes as beauty consumers see a rise in “mask-ne,” or breakouts related to wearing a face mask during the COVID-19 pandemic. In an interview, Rutson said the launch of CelleRx’s debut product is “serendipitous with timing,” as it is essentially a disinfectant for the face. 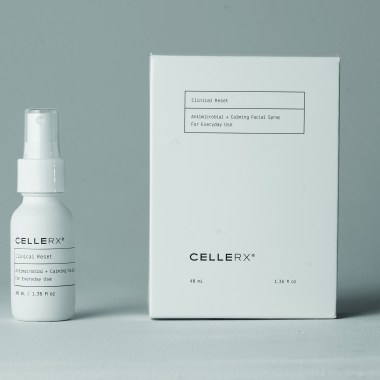 “Everyone has seen the impact of mask wearing on their skin and that impact is bacteria,” Rutson said. “It’s like a breeding ground under there, but the reality is that’s going on anyway.”

Clinical Reset can be sprayed on the face or elsewhere on the body and can be used in tandem with other beauty products such as serums, moisturizers, sunscreen and makeup. It is cleared as a 510(k) medical device by the Food and Drug Administration.

The product is comprised of the disinfectant hypochlorous acid, which is also present in NovaBay’s NeutroPhase and Avenova. Rutson and Xiao, who met shortly after Xiao graduated from New York University, declined to disclose how they came in contact with NovaBay.

Building a brand backed by a pharmaceutical company did seem to present its own set of challenges.

“Something we face that traditional beauty brands don’t are the pharma regulations,” said Xiao, who has a background in investment and technology. “We have to be careful about what we put on the box. More often, you see companies making claims that are sort of true, but could be interpreted in a lot of different ways — or just not [true]. For us, every single word [of] copy is an understatement, not an overstatement.”

In March, when coronavirus lockdowns first took effect in the U.S., Rutson tripped in her home and cut her face. She “wasn’t prepared to go to the hospital to be stitched up,” she said. Instead, a plastic surgeon came to her home. Rutson said she used Clinical Reset to clean her facial wound and now uses the product twice a day before applying serums and creams.

“I’ve got an autoimmune disease, I’m used to taking injections, I’m used to having my skin swabbed with astringents — forget about COVID-19 or when I have Botox and I get astringents swabbed over it afterwards,” Rutson said. “I spray [Clinical Reset’s] hypochlorous acid over me now. It’s totally pure. It doesn’t even sting my eyes.”

“I’ve got a lot of credibility,” Rutson said. “Anything I do has to be groundbreaking. That’s been taken seriously by practically every retailer.”

In her high-profile role at Net-a-porter.com, Rutson garnered attention for her personal style, appearing in street style photos during fashion month and amassing nearly 70,000 followers on Instagram. Asked why she decided to become a beauty entrepreneur, Rutson said she knows the industry as well as fashion.

“I’ve done men’s, women’s, home and beauty for 30 years. I’ve never not done beauty,” she said. “Under my jurisdiction of responsibilities has always been beauty. I know this industry as well as fashion. It’s just not as obviously documented.

“I’ve spent a lot of time pivoting what my emphasis is and it’s always been regardless, it’s got to be groundbreaking,” she continued. “My career was formed on that. It’s well known that I’m the discoverer, I’m there to look for something that isn’t there that people don’t know they want yet, or even existed — whether it was discovering new designers and brands and building it for them.”