The renovated Barcelona flagship serves as a template for the perfumery chain’s openings and renovations across Europe and the Middle East. 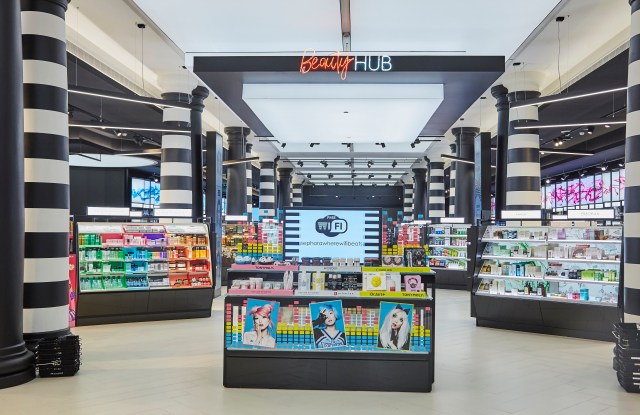 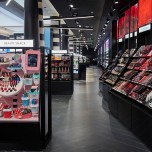 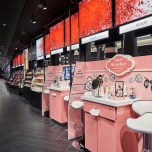 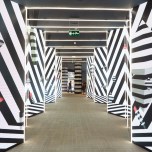 BARCELONA – Scooting down a slick, twisty slide is no longer mere child’s play. It’s a bona fide means to catapult even adults into a next-generation Sephora retail concept, located in the heart of Barcelona.

The 17,780-square-foot, renovated flagship boasts new services, digital elements and some 240 brands, and now serves as the template for all of the LVMH Moët Hennessy Louis Vuitton-owned perfumery chain’s openings and renovations across Europe and the Middle East.

“The overarching vision we have is to create the most-loved beauty community,” Stephan Borchert, president of Sephora Europe and the Middle East, told WWD.

“The concept is articulated around three big principles. The first is that we wanted a fantastic ‘wow’ design. The second is we really wanted to strengthen the experience and leverage services in a much more dramatic way,” said Stéphane Delva, marketing director at Sephora Europe and the Middle East. “The third one was really to push the [omnichannel-ness].”

To access the store, which reopened last month, one can enter the Centro Comerical El Triangle from the Plaza de Catalunya. People walk by screens displaying short films featuring floating lipsticks or women (with no shortage of Sephora’s signature black-and-white stripes in the mix) to beckon and accompany them.

“It’s like [an] ‘Alice in Wonderland’ of beauty in the store,” said Francesco Alvarez, managing director of Sephora Spain.

Another entrance on the Calle Pelai leads directly to the slide, while an escalator and elevator take people into the boutique as well, on the minus-one level.

“We didn’t want brands at the entrance of the beauty department. We wanted an attraction, a hot spot, an area that creates interaction with customers,” said Beatriz Torres, director of customer marketing and communication at Sephora Spain. “It’s ephemeral – it will change about every three months.”

Beauty meets technology in the Trend Zone. A shopper can pick up a makeup brush and wave it around in front of a large screen to create a digital design, which is then made into a gif to send from the shop.

“We’re talking about lights, about illuminators, about glow,” said Torres.

“It’s to have fun as you learn about beauty,” added Alvarez.

Before the executives could continue their tour of the store, a bunch of dancers burst on to the scene and performed to thumping music.

On the left, near the entry, is a Go Pro “sushi bar” of color cosmetics. In each container making its rounds on the conveyor belt are various Make Up For Ever products needed to create a different look, which is outlined in a drawing. These can change depending on what’s trending online or propositions from consumers.

“Drops,” toward the back of the store, is a first for Sephora anywhere. Here, customers can personalize the lids, sizes and labels of their perfume, chosen from 24 different olfactive juices – boasting names like I’m Pretty or I’m Wild – to fill the flacons.

Other brands – like Becca – are using the Barcelona store as a launchpad into Spain.

The Dry Bar by Rizos involves a local hairstylist for a range of quick to in-depth services. A five-minute offer is free, while there is a charge for those taking longer than 15 to 20 minutes. In this section, too, are products sold by the likes of Kérastase and tools from GHD.

The Korea House is a gondola carrying labels such as Tonymoly, Caolion, Too Cool for School and Dr. Brandt Skincare. A Beauty Board, similar to that on Sephora’s web site, allows people to upload and share their makeup looks digitally.

At the heart of the Barcelona store is the Beauty Hub, involving big tables where free mini-makeovers are done in 15 minutes and tutorials are given. (Master classes will be held twice weekly starting in September.) Products can be played with and information on them is made available through tactile screens.

Other digital services include a virtual Look Book, showing various makeup styles through drawings, and a Virtual Artist, enabling people to try makeup products virtually and then print out or share the results via social media.

Another device used in the Beauty Hub is the Color Profile, which was designed by Sephora U.S. and Pantone to measure people’s skin tone and suggest the best foundation match available among products in store.

Elsewhere in the store is Sephora Loves, an area showcasing some of the latest makeup brands; a Brow Bar, currently using Benefit products; Sephora Favorites, with labels from various product categories, and Beauty Snack, a selection of Sephora-branded items.

“We are finding the Sephora collection to be a huge recruiter for Millennials and younger, on makeup and also skin care,” said Alvarez, referring, treatment-wise, to the recently introduced private-label collection Skincare Mix & Play.

Certain products on the various gondolas are changed monthly, depending on what’s trending best.

The Gift Factory is where personalized product wrapping and engravings take place.

There’s a niche fragrance zone and one for parapharmacy beauty brands — with labels like Biotherm, Sesderma and Vichy — which is unique to Sephoras in Spain.

Staffers in the flagship are equipped with the My Sephora app, allowing them to access data on shoppers gleaned online and in-store.

“What we wanted to do really was … reactivate and rejuvenate customer experience. This is not only a store, but it’s the key touch point for our brand,” said Borchert. “So it’s all about the store look and feel, but it’s also about the cast, the training we give. It’s not about sales technique anymore; it is about mindset, about attitude.”

The executive explained that the “cast” (aka the staff) is integrated into the community, then from the outside, brands, bloggers and vloggers are blended into the Sephora “ecosystem,” as well.

“That’s really what we feel is the next level of beauty retail,” said Borchert, whose geographic zone represents about 1,100 stores.

Prior to the Barcelona flagship reopening last month, two smaller versions of a similar model were tested in France and one in the Middle East, involving twists on certain elements that Sephora has already used in the Americas and Asia. Subsequently, another Spanish flagship debuted, in Madrid, as well as one in Copenhagen.

Sephora executives would not discuss numbers, but industry sources estimate the new store model will cause foot traffic to rise by a high double-digit percentage.

The store in Barcelona is about the same size as the Avenue des Champs-Élysées flagship in Paris, which the sources estimate generates annual sales in excess of 200 million euros. However, given that avenue is among the world’s most well-trodden shopping meccas, revenues from the Plaza de Catalunya location in Barcelona are unlikely to be comparable.

Borchert arrived at Sephora two-and-a-half years ago with the aim of making the retailer into more of a powerhouse in Europe than ever before. “Our U.S. business is really strong, our Asian business is really strong. We felt Europe was an area which we could push forward more,” he said, while addressing journalists prior to the store walk-through.

Borchert described 2016 as “fantastic” for Sephora. “We have more or less achieved our goal of doubling sales over five years, but have not added many new markets,” he said. “So we grew a lot in the existing territory, existing stores. And our vision was basically threefold: One is to increase customer experience to a next level. Second, is to tackle the digital challenge we have everywhere. And thirdly is very clearly also to cover more geography, because there were still opportunities in Europe and globally for us.”

He told WWD in a separate interview that although Sephora is quite well-represented in Europe, “we have two white spots: the U.K. and Germany.”

As reported, on June 29 Sephora entered Germany by opening a store in Munich operated in partnership with Galeria Kaufhof. The 1,445-square-foot shop-in-shop concept, an updated version of a format debuted at Manor department store in Switzerland last year, was conceived to allow people to try out products in a “beauty playground” setting.

Still, a challenge remains in France, Sephora’s home turf, which is driven by price discounts.

The future looks rosy overall for the retailer in the Europe and Middle East region, with double-digit growth expected annually in the mid-term – as the beauty market there rises by around 2 percent – thanks to new concepts and brands, e-commerce and brick-and-mortar retail.

“We have a very true and strong genuine conviction that retail is not about transactional relations anymore. It is much, much more,” Borchert said. “It has to become an emotional bonding. It has to become a true partnership with customers. And that has an impact on everything – on how you do the stores, interact with customers, the people we have in stores serving customers.

“We believe very strongly in experiential retailing,” he said, adding that must be “sharable, memorable and repeatable.”