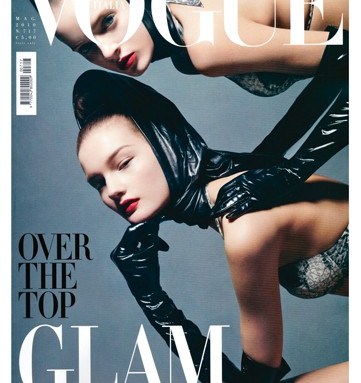 Wondering who the runaway runway sensation will be during the spring 2011 collections? The smart money is on Kirsi Pyrhonen, the 16-year-old Finnish phenom who’s already clocked an Italian Vogue cover (she’s the girl on the bottom) and Balenciaga campaign.

Lions and tigers and leopards, oh my! Those wildcatting for beauty’s next hot trend need look no further than the big cats of the jungle, one of the season’s most popular motifs—to wit, the Leopard Love palette by Too Faced, Chantecaille’s Tiger in the Wild palette and MAC’s Fabulous Felines collection, to name just a few. Says MAC’s Jennifer Balbier: “Felines are smart, mysterious, sexy and have all the subtle colorings that mirror the rich shades and slinky, sophisticated looks we saw on the fall runways.”

Fragrance fans will be giving three cheers for Italy this fall, with new scents from the country’s most coveted design houses.

Signature Note: Lilac, geranium and peach spiced up with mandarin and pink pepper.

A fashion world favorite, makeup artist Ozzy Salvatierra has never forgotten the natural high garnered by working behind a counter. “I saw the power makeup has,” he says. “When women were having a bad day, after fi ve minutes of attention, they would look at themselves in a different way. They would walk out with a confi dence they didn’t come in with.” Driven by the desire to give back, he’s teamed up with Jamie Clayton, host of VH1’s TRANSform Me, to launch Aesthetic Empowerment: free-of-charge monthly workshops open to the public to be held at the Callen-Lorde Community Health Center in New York. “Makeup can improve people’s lives and their self-esteem,” says Salvatierra. “If I can teach that to someone who isn’t going through the best time in her life and it makes her happier, that makes all the difference. That’s the power of cosmetics.”