Shania In Tune With Stetson

NEW YORK — Believe it or not, there was a time early in Shania Twain's career when the most memorable thing about the singer was her unusual-sounding name. "Nobody knew me as an artist," Twain recounted during a recent interview. "They just... 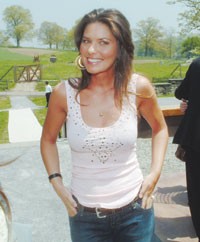 The Rise of Makeup for Men

Behind the Brush: Akihisa Yamaguchi

NEW YORK — Believe it or not, there was a time early in Shania Twain’s career when the most memorable thing about the singer was her unusual-sounding name. “Nobody knew me as an artist,” Twain recounted during a recent interview. “They just thought I had this great name, and ‘wow, did it ever sound like the name of a perfume.'”

“I always dreamed I’d have a fragrance,” said the country-pop signer during a launch event held at Blue Hill at Stone Barns in Pocantico Hills, N.Y., last week.

The fragrance company approached Twain with the concept last spring, hoping to harness her star power to reintroduce its Stetson brand to women. “We only had one person in mind,” said John Galantic, president of Coty U.S.

Like Coty’s other megawatt celebrity partners, Twain brings a thriving fan base to the union. Her credentials are staggering: She’s the best-selling female country music artist of all time, a five-time grammy winner and her album, “Come on Over,” is the sixth biggest-selling album of all time.

Twain’s broad appeal is not lost on mass market retailers. “Stetson is a huge brand for us. We are very excited about this launch,” said a buyer from one of the top three mass chains. Industry sources expect Shania by Stetson to generate between $20 million to $30 million in first-year retail sales — that kind of a sales surge could spike Stetson’s total sales by nearly 50 percent. Industry sources estimate Stetson is currently a $40 million brand.

Noting the similarities between music and scent, Shania said her fragrance was designed to “inspire a mood of confidence and independence.” The performer exhibited both traits when she burst onto the country music scene more than a decade ago baring her midriff, a “no-no” in Nashville.

On this recent Wednesday afternoon, Twain, glowing from a bronze suntan — a souvenir from a recent trip to Barbados, said the scent best encompasses her personality. “Ultimately, I wanted it to reflect me in a very honest way. I want women to feel strong, but very feminine when wearing the fragrance.”

Twain opted to design a fragrance for the mass market to cater to her fan base. In Twain’s view, this is a scent for multitasking women like herself. “We desire the luxury of spraying on a fragrance that makes us feel great,” she declared. Prior to collaborating on her new signature scent, Twain wore Issey Miyake.

The fragrance, developed by Takasago International’s Carlos Vinals, is described as a “Western heart accord” with top notes of grapefruit, mandarin, nectarine, dewy greens and red berries and star fruit; a heart of prairie rose, jasmine and honeysuckle, and a drydown of musk, sandalwood, patchouli and white amber.

The curved glass bottle — inspired by a vase in Shania’s home — has a frosted plastic cap with the logo in white on the glass. The bottle’s carton is a vibrant pink to reflect Twain’s energy and has a gold ban and gold stars along the perimeter to convey the “Western-chic” values of the Stetson brand.

“Coty wanted all my ideas and then built on them. That’s great teamwork,” said Twain, adding that that’s how she collaborates with her husband, record producer Robert John “Mutt” Lange, on her albums. Twain, who has dedicated the last 20 years to performing, said she welcomed the temporary diversion from music. “I’ve always focused very much on the music and haven’t strayed at all,” said Twain, adding, “I thought this could be a really fun idea and, like music, it’s a creative process.”

Coty — which has plenty of experience mining the power of musical performers — chose to put Shania’s name front and center, as opposed to the Stetson brand.

“In order to have a success, the fragrance really has to reflect the personality of the person behind it,” said Marsha Brooks, vice president of new business development for Coty. Twain agreed: “Why have somebody who is a celebrity branch off into something that doesn’t reflect who they are? The whole idea is that it’s a marriage between a product and a personality.”

Industry sources estimate Coty will back the launch with $10 million in marketing support. Coty executives unveiled the print ad last week: a shot of Twain wearing a Stetson hat, a pink prairie skirt and a white shirt (tied in a knot to reveal her midriff) with the tag line “Shania: The Will of a Woman.” The ad, shot in Mexico by photographer Mikael Jansson, will begin running in September beauty books. E-mails will go to Twain’s fan club, and scented postcards will be sent via the U.S. postal service to alert the singer’s die-hard devotees about the fragrance.

“We will reach 80 percent of our target audience eight times during the launch,” noted Stephen Brodeck, group marketing director for Coty Beauty.

Brooks said Coty is considering a “TV presence” this fall, but has not finalized those plans. Coty executives would not comment on whether Twain will appear at the Country Music Association Awards, which are scheduled to take place here on Nov. 15.

Coty also is talking with Twain’s record label, Mercury Records, about collaborating on promotions. In the past, Coty has worked with retailers to cross-promote its Celine Dion fragrances with the singer’s albums by merchandising a clip-strip display of CDs near the fragrance. For this launch, Coty is proposing an endcap display that merchandises CDs and the fragrance together. As it did for Dion, Kmart will hang promotional posters for Shania by Stetson in the CD department.

As for more scents on the horizon, Twain acknowledged there were so many directions they could have pursued. ” There are a few fragrances that would suit my personality,” said Twain, adding that this scent best reflects her. “I love the perfume, I genuinely love the smell of it.”