The new facility in Yokohama includes areas that are open to the public, such as a lab where customers can have products customized for them.

TOKYO — Shiseido continues its push to become a bigger player in the international cosmetics industry with a newly opened global innovation center in the Japanese city of Yokohama, about an hour southwest of Tokyo. With a total of 17 floors and 604,730 square feet of space, the building will include a variety of research and development facilities, as well as areas that will be open to the public starting from April 13. The company invested more than 40 billion yen, or nearly $400 million, in the center.

“Our goal is to become the most trusted beauty company in the world, by being the most innovative, aspirational to youth, selected by diverse talents, and trusted by society and shareholders,” Masahiko Uotani, Shiseido’s representative director, chairman and chief executive officer, said at the press unveiling of the new center on Tuesday.

The shiny new center in Yokohama’s Minato Mirai section makes quite the first impression on visitors, with a large, split-level lobby area that is also home to a vegetable-centric café and the world’s largest crystal LED display, a 33-by-66-foot 16K screen developed by Sony. Also on this floor is Shiseido’s new Beauty Bar, where customers can have a specially trained researcher create a lotion and emulsion that is entirely personalized to their skin, from the ingredients and formulation down to the package design. The service is available to anyone who makes an appointment, which takes about two hours from start to finish. The 12,000 yen cost includes the two products, which are made right in the Beauty Bar but mailed to the customer’s home after quality testing, arriving about seven to 10 days later.

“We believe that, in the future, there will come a time when customers will only buy things that are completely tailored to them,” said Yoichi Shimatani, the company’s executive vice president and chief innovation officer. “The Beauty Bar is the ultimate customization that we are able to offer at the moment, but I think it would be good if in the future we can offer customers this level of customization at home as well.”

The ground floor is also home to a small exercise studio and locker and shower facilities, which can be used as a running station for those who work in the area and want a place to change and clean up after a run outdoors. The studio will also offer classes in yoga and other programs.

The second level of the facility — which is nicknamed S/Park — houses a museum to Shiseido, with displays divided into four zones focusing on science and art, life of beauty, beauty innovation and the future. A hall on the third floor has a capacity of 500 and will be used for various presentations and conferences. 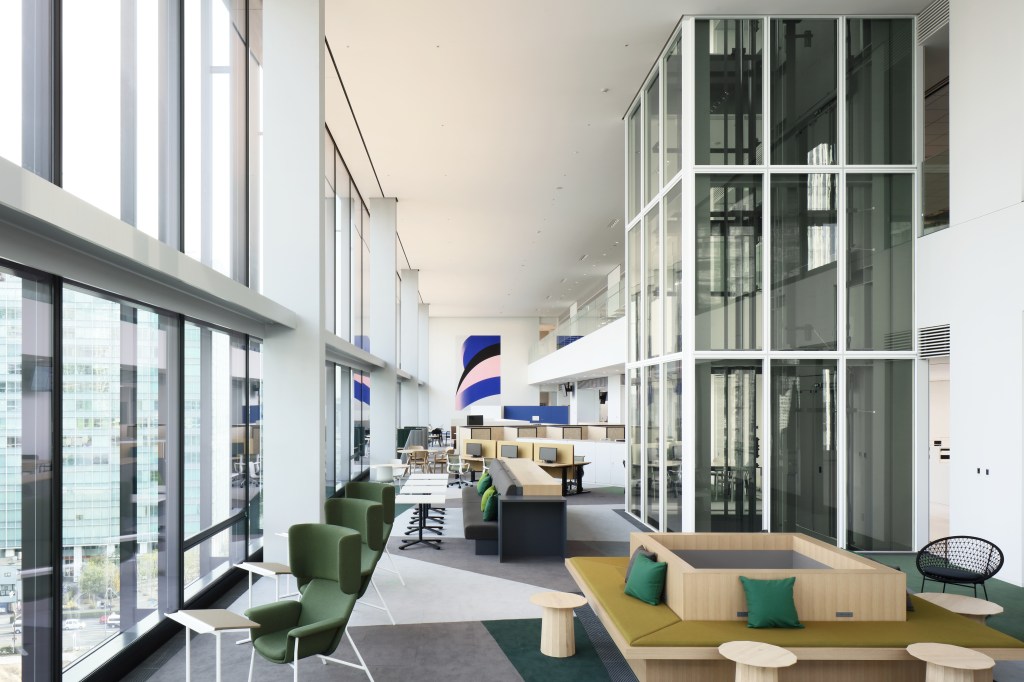 A view of the office in Shiseido’s new global innovation center.  Shiseido

The research levels span from the fourth to the 15th floors, and include an area dedicated to collaboration with both business partners and outside researchers from within Japan and across the world. Outside institutes can even rent space in the lab, facilitating cooperation and joint research possibilities with Shiseido itself.

On other floors, cutting-edge analytical equipment and the world’s most advanced scanning electron microscope help researchers to get the most precise data possible, which then helps the company develop both technologies and products.

Separately, Shiseido revealed on Monday that it had signed a joint business plan with Alibaba Group through its subsidiary in China. The plan aims to combine Shiseido’s innovation capabilities with Alibaba’s big data and consumer insight, in order to reinforce product development, brand marketing, e-commerce and more. Together with Alibaba, Shiseido will focus on developing products for the Chinese market. The first codeveloped products, a shampoo and an oil for split ends, will be released in September.

About five years ago, Shiseido invested only 1.8 percent of its total sales into research and development. Now that figure is around 3 percent, but Uotani is aiming to get it up to 4 percent soon. But it’s not only products that he is working to innovate — the executive, whose background is in marketing, says marketing innovation is just as important. Over the first three years of its mid-term plan called Vision 2020, Shiseido invested $1 billion incrementally worldwide in marketing. Marketing investment now accounts for 27 percent of net sales, and is still increasing, as Uotani acknowledges that brand awareness in markets such as the U.S. is still not as high as it should be.

Another area that Uotani says is somewhat of a “disappointment” is that of the company’s supply chain. After shuttering three plants in Japan within the past 10 years, Shiseido has increased output of its remaining three while also outsourcing some production, and yet the company still finds that sometimes it isn’t able to meet the demand of customers in its home market. To address this issue, it will open three new factories between now and 2021.

Other areas that Shiseido is working on to address through innovation include social and environmental issues such as women’s empowerment, climate and marine pollution.

“Shiseido is not going to wait for the government to do something for us,” Uotani said, referencing Prime Minister Shinzo Abe’s women-centric economic stimulation program. Shiseido is a leader in gender inclusion in Japan, already surpassing the government’s recommendations and now aiming to have women in 40 percent of management positions by 2020, and not long after that to have complete gender parity in management.

“The reality of Japan today is that we are ranked 110th in the gender gap index. I think it’s a shame for the country that is the third-largest world economy with a developed society. So we have to take action now. I have a very high sense of urgency. I can’t just simply complain, I have to show a model to other business leaders,” the ceo said.

In terms of pollution of the oceans, which as an island nation is something that greatly affects Japan, Uotani said Shiseido created a new research team last year tasked with developing biodegradable plastics. Until then, the company is also working to decrease its use of plastics by selling as many products as possible in refill cartridges rather than only in hard bottles. Currently 80 percent of the products it sells in Japan are refills, and the company hopes to implement this in other markets as well. Shiseido is also looking into alternatives to plastic packaging, such as wood and paper.

“In the Pacific Ocean, the garbage is collecting in Japan even from other countries, whether we like it or not,” Uotani said. “It’s really turning into a huge crisis for society. So again…we don’t want to just be sitting and waiting.”