SkinLab is a series of service-led retail spaces, the first of which opened in Napa, Calif.

This year, SkinCeuticals will roll out SkinLab, its foray into service-led skin-care locations.

SkinCeuticals is expanding its physical footprint.

The L’Oréal brand, known for its C E Ferulic serum and Custom DOSE machine, is rolling out its first set of service-led skin-care stores. Called SkinLab, each location will offer services in partnership with members of SkinCeuticals’ roster of 100 physicians, including plastic surgeons and dermatologists, nationwide. SkinLab will also be shoppable and will feature SkinCeuticals’ full brand range, which was previously only available online, at partner dermatologist offices and in Blue Mercury stores.

The decision to enter “service-led retail” was born out of “the aesthetic landscape changing,” said Tina Fair, SkinCeuticals’ general manager.

“Younger people are entering aesthetics, [but] one thing [other aesthetic services] lacked was skin-care integration,” she said. “They also lacked the backing of a doctor.” 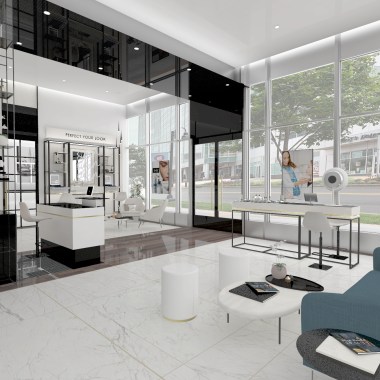 The first SkinLab location opened in late December in Napa, Calif., in partnership with Dr. Karynne Duncan. A second space opens this month in Houston followed by a third in Stamford, Conn., in February. Further locations will roll out throughout the year. Each is staffed by the partnering doctor.

SkinLab’s offerings include SkinSmooth, an LED micropeel paired with SkinCeuticals’ Phyto Corrective Gel; SkinBright, a laser treatment that incorporates SkinCeuticals’ C E Ferulic serum, and SkinFirm, microneedling accompanied by the Hydrating B5 Gel. Prices start at $150 and each treatments is less than one hour long.

Industry sources estimate that SkinCeuticals raked in $156 million in manufacturers sales in 2019. The business is said to have experienced double-digit growth for the past two years and is on track to do the same in 2020.

SkinLab will grow its offerings after first testing its initial locations, said Fair, adding that the brand has “high ambitions” for the program.

“We’re going to gain our learnings,” she said. “Our [physician partnerships] program has been extremely successful. About three years ago, we only had 13 locations and now we have 100. Our ambition for SkinLab is just as strong.”

Is This the First Fully Recycled and Recyclable Lip Product?