Kiss My Face has rolled out several new eco-conscious initiatives, including a new in-store display called the Greenhouse. 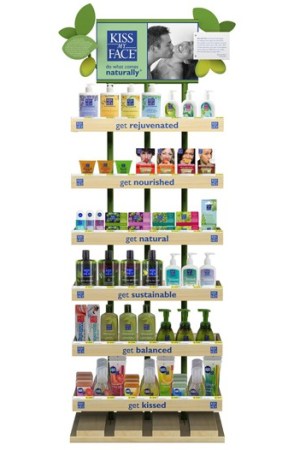 GREENHOUSE EFFECT: Kiss My Face has rolled out several new eco-conscious initiatives, including a new in-store display called the Greenhouse. According to Kiss My Face co-founder Bob MacLeod and vice president of marketing Lewis Goldstein, the Greenhouse is not only recyclable but is made primarily of corrugated components made with a minimum of 90 percent recycled materials, graphics printed with non-polluting water solvent inks and steel parts made from 70 percent recycled material. The Greenhouse is expected to hit 500 Borders stores as well as Wegmans stores in December. The company will also debut newly redesigned eco-conscious packaging and will partner with RecycleBank, an organization that rewards consumers for recycling trash in their own neighborhoods across the country.

JANE’S WEB: Jane Iredale relaunched its Web site earlier this week, which now boasts a redesign and interactive capabilities. The new site now features an area that provides users with an overview of the line, complete with active ingredients and what they do, as well as application tips from makeup experts. The site’s highlight is perhaps the Mineral Makeover Room, a place where a user can choose a model with a face shape and skin tone similar to their own and apply Jane Iredale products.

IT’S SETTLED: The lawsuit brought against Vogue International, the maker of VitaminShampoo, by Energy Brands, the maker of VitaminWater, has been settled out of court. According to a statement provided by Clearwater, Fla.-based Vogue International, “Energy Brands commenced a litigation against Vogue regarding component’s of Vogue’s trade dress in its VitaminShampoo and VitaminConditioner products. In an effort to avoid litigation and not cause hardship to its retailers, Vogue agreed to modify its design for its VitaminShampoo and VitaminConditioner products and the parties have agreed upon the new designs. The two companies look forward to getting back to business and to enjoying a peaceful coexistence.” The newly repackaged hair care items are on shelf now at select Wal-Mart stores and will be rolling out nationwide this month. The VitaminShampoo line harks back to Vogue’s first hair products, Pro-Vitamin and Pro-Vitamin Intensives, which launched in the early Nineties. Items in the VitaminShampoo and VitaminConditioner lines sell for $6.99 each.

BARBER SHOPPING: Rudy’s Barbershop is introducing a hair care line in December with four products: 16-oz. Shampoo No. 1 for $14, 16-oz. Conditioner No. 2 for $16, 16-oz. Body Wash No. 3 for $14 and 5-oz. Shave Cream No. 4 for $12. The line will be carried in Seattle-based Rudy’s 14 salons and Rudy’s sister concept, Rudolph’s, in Los Angeles. “We wanted to be able to offer a value price point for our clients, and we wanted to be able to offer them a good, gentle daily shampoo,” said Michelle LaFrance, a coordinator at Rudy’s, which will continue to carry Bumble and bumble products. Classic apothecary items inspired the packaging design. The line is expected to generate about $1 million in first-year sales. Rudy’s is also opening a location in New York at the ACE Hotel on Broadway and West 29th Street next year.

E-MAIL AWAY: A little information went a long way in October at beauty firm Christi Harris. Direct-mail sales surged 30 percent after Harris sent an e-mail detailing the how’s and why’s of her skin treatment line and offering free shipping. “It was a lot of information to mail at one time,” said Harris, founder and owner of the Dallas company. “You think people don’t read [e-mails], but they do. They want to be educated, and they want things that make sense and are affordable. If it makes sense, they’ll buy it.” Harris, who also makes color cosmetics, hair and body care products, sells to Nordstrom as well as her own two stores in Dallas and Houston and Web site. Most of her skin treatment products retail for $38 or under.

BODY SHOP NAMES NEW PRESIDENT: Retail executive Phil Kowalczyk, most recently of the J. Jill Group Inc. brand, has been named president of The Body Shop for the U.S., Canada and Mexico overseeing 461 The Body Shop boutiques as well as its online business. Kowalczyk will report to The Body Shop International chief executive officer Sophie Gasperment, who is based in London. Outgoing president Peter Ridler, who has held executive roles for both the U.K. and Ireland and most recently the Americas, is returning to the U.K. to become Managing Director for Accessorize Worldwide.