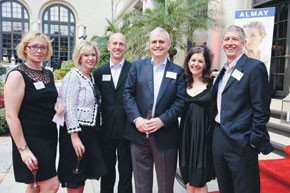 ON THE PODIUM: The outgoing and incoming chairmen of the National Association of Chain Drug Stores used their time to honor the 75th anniversary of the organization and reflect both on the past and future. Warren Bryant, chairman, president and chief executive officer of Longs Drug Stores Corp. — and incoming NACDS chairman — relayed how, 75 years ago, total chain drug sales were $213 million — about what a chain like his does in a few weeks. He also discussed how fountain drinks and mortar and pestles were commonplace. Now, he said, drugstores have a beauty mix suited for the interests and passions of today’s society. Issues, as outlined by outgoing chairman David Bernauer, now include the saving of electronic prescribing and the need to keep health care spending in check.

PARTY ON: Revlon toned down its traditional Friday night soirée to reflect the more lean and mean direction of the company. Pregnancies halted two of its supermodels from attending, but posters of its glamorous spokespersons were displayed to remind attendees Revlon still has big-name representation.

MINERAL EXPLOSION: Despite more players crowding into mineral makeup, the segment is displaying enormous elasticity. Carol Hamilton, president of L’Oréal Paris, said the division’s Bare Naturale brand has become its leading cosmetics franchise, surpassing True Match. She added that Bare Naturale is also the number-one mineral makeup line in the mass market. Physicians Formula, credited with bringing mineral makeup to mass, plans to expand its newly introduced Organic Wear franchise with eye and lip products, slated to ship in June or July. Some 40 items are planned for next year, too. Mass market sales of the minerals more than doubled last year to $149 million, according to Information Resources Inc. Datamonitor’s Productscan Online reported 451 new mineral makeup launches in the U.S. last year, compared with 132 in 2005.

ALBERTO-CULVER APPOINTMENT: Alberto-Culver Co. has named Gina Boswell as president of global brands, a new position. In her new role, Boswell, who joined the company from Avon Products Inc., will oversee product development and help Alberto-Culver expand its beauty footprint, said Richard Hynes, senior vice president of Alberto Personal Care Worldwide. “We want to be more of a beauty company than a consumer products company.”

L’OREAL LINEUP: In June, expect Advanced RevitaLift Anti-Wrinkle Serum Concentrate for $16.50, which Carol Hamilton described as a high-potency serum clinically proven to lessen wrinkles. On the hair care side, Vive is now the fastest-growing hair care line in the mass market, she said. With that is a new shampoo and conditioner called Vive Pro Hydra Gloss — billed as the first hair care line formulated with royal jelly and a cherry blossom scent — due to launch this month or June. Several NACDS show attendees were also abuzz over the division’s plans to launch a mass version of PureOlogy, the professional hair care brand that L’Oréal purchased last year. In salons, PureOlogy is formulated specifically for color-treated hair. Within Maybelline, Karen Fondu, president of Maybelline New York-Garnier, said to expect Maybelline New York Mineral Powder Makeup and Garnier Nutritioniste Ultra-Lift Deep Wrinkle Treatment. She added that Maybelline New York contributed 40 percent to the new product growth in 2008 to date.

LUMENE EXPANDS: Distribution of Lumene is growing beyond CVS and Target. According to sources, CVS will trim the color selection slightly, while boosting skin care. Other brands that got their start in major drug chains such as Yes to Carrots and BeFine also are gaining distribution in more retail accounts.

VARSITY TEAM: Softsheen-Carson Professional will extend its annual summer Stylin’ Tour to the fall to take advantage of college football season. The 13-week tour will begin in an Atlanta Wal-Mart store, where urban radio personality Steve Harvey will broadcast live. Markwins’ Wet ‘n’ Wild will rev up the engine of its Gulf Stream trailer for the fourth year, adding three months to the annual tour, which this year will make stops at college football games, sorority houses and beach games. Sally Hansen hopes to take makeup artist Carmindy on the road to trumpet the newly launched cosmetics line Natural Beauty, which should finish its initial retail rollout by May 15.

L’Oreal photo by John Simon; all others by Stephen Leek