The founders of Mizu New York salon have created a customized application for the iPhone. 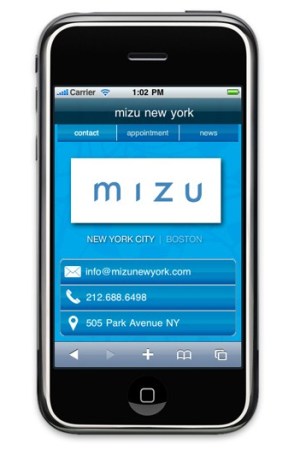 BEAUTY APP FOR THAT: To make sure scheduling a beauty appointment is “as easy as that,” the founders of must-visit Mizu New York salon have created a customized application for the iPhone available on iTunes. Claiming it is the first New York salon to do so, Mizu said the app offers one-touch calling, a salon locator via the iPhone’s GPS, appointment request capability via e-mail and a quick list of the salon’s services and prices. Mizu, created by former Bumble and bumble stylists Vaughn Acord and Damian Santiago, partnered with ad agency Guts-Ad to create the free app. The salon is located at 505 Park Avenue.

This story first appeared in the July 23, 2010 issue of WWD. Subscribe Today.

NEW HIRE: Woodley & Bunny has tapped Tom Seeberger as their new head of sales and education for the distribution side of their business. Seeberger is known best for building the Bumble & bumble brand, creating its academy and styling programs.

PLUS ONE: Hairstylist Paul Norton has joined the Nexxus Salon Hair Care Artistic Team as the brand’s newest celebrity stylist. Norton will be appearing at consumer and industry events and will also help to create content for Nexxus online platforms. Throughout July Norton will be featured in a series of instructive “how-to” style videos launching on the Nexxus Facebook page. He will also communicate directly with Nexxus’ Facebook fans.

PRETTY BUSY: Taylor Momsen just keeps racking up those ad campaigns. The 16-year-old starlet, who was recently revealed as the not-so-secret face of Madonna’s Material Girl line for Macy’s, will also star in advertisements for John Galliano’s new women’s scent, due to be launched in the fall, a spokesman for the brand confirmed, following a report in the French edition of Grazia magazine. Earlier this year, the “Gossip Girl” star and lead singer of rock band The Pretty Reckless starred in the spring ad campaign for British high-street retailer New Look. It won’t be Momsen’s first foray into fragrance: In January, she hosted the launch of the Love Rocks fragrance collection by Victoria’s Secret Beauty.

POLISH PARTNERSHIP: To celebrate back-to-school, Essie Cosmetics and Teen Vogue have collaborated on a limited edition nail polish called Declare Your Denim. The shade, which becomes a darker and edgier blue with multiple applications, aims to celebrate fall’s favorite staple — the classic blue jean — and also help out victim’s of the Gulf Coast oil disaster. Teen Vogue is inviting readers and denim lovers to don their favorite pair of jeans and head to Military Island (Broadway, between 43rd and 44th streets) in Times Square, July 28, from 9 a.m. to 11 a.m. to take part in a charity denim drive, in partnership with Fashion Delivers Charitable Foundation. Consumers can pay $5 to have a new pair of denim donated from one of Teen Vogue’s denim sponsors, or donate a new pair of their own. Those making donations will receive a bottle of Declare Your Denim (only 500 bottles have been created). The event will also feature roving photographers snapping photos of attendees in their denim, to be displayed live on the Times Square Jumbotron, as well as free copies of Teen Vogue’s August special denim section.

ALES APPOINTMENT: Bernard Flobert has been named managing director of Alès Groupe, the company announced Thursday. He replaces Patrick Alès, the firm’s founder and principle shareholder, in the role effective immediately, though he will be operational in the position from Aug. 23. Alès will remain president of the firm’s board of directors. Flobert’s résumé includes stints at Danone, McKinsey & Co., LVMH Moët Hennessy Louis Vuitton, Darty and The Phone House. In 2009, Flobert founded a consultancy, which advised Alès on the modernization of its brands and their commercial development in France. “I am convinced Alès Groupe has considerable growth potential in France and internationally,” stated Flobert. Alès Groupe’s brands include Lierac and Phyto.

CHANGES AT PIERRE FABRE: Olivier Bohuon will be replacing Jean-Pierre Garnier as chief executive officer at Pierre Fabre Group effective Sept. 1. Bohuon, 51, is executive vice president of Abbott Corp. and president of its pharmaceutical division, a $22 billion business. “I will head the group in close collaboration with its chairman and founder and we will jointly pave the future,” Bohuon said upon the announcement. Pierre Fabre is the second largest independent French pharmaceutical company and generates a sales turnover of 1.8 billion, or about $2.3 billion at current exchange.