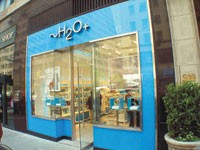 NEW BIOTHERM GM: Catherine Roggero will be appointed general manager of Biotherm USA on June 1, succeeding Chris Harrison, who has been appointed to the new position of general manager of military sales for L’Oreal USA’s Luxury Products Division. In her new post, Roggero’s responsibilities will include managing the development, implementation and execution of growth strategies for Biotherm in the U.S. She has been with L’Oreal USA for more than eight years and most recently held the position of vice president of international development for Kiehl’s Since 1851. Before that, she worked in marketing and sales within travel retail for the L’Oreal USA luxury products division. “Catherine’s expertise with brand development, along with her passion, energy and drive, will be great assets to the Biotherm team,” stated Edgar Huber, president of the L’Oreal USA luxury products division.

GIVAUDAN APPOINTMENT: Swiss fragrance supplier Givaudan has appointed Rose Eckert vice president of sales and senior account executive at its Fine Fragrance Creative Center in New York. Eckert, a 25-year veteran of the beauty industry, has worked for companies such as L’Oreal, Creations Aromatique and Tsumura. In her new post, she will focus on multiple Givaudan clients, including Coty, Liz Claiborne and Mary Kay. Eckert, who reports to Cosimo Policastro, executive vice president for Givaudan’s fine fragrance division in North America, also will be responsible for identifying new business opportunities.

GLOWING REVIEWS: When Jergens introduced Natural Glow Daily Moisturizer in March, the company knew it was going to be a hit. What it didn’t count on was the selling-through of the first shipment by April, said Brian Rudie, Jergens senior brand manager. Soon after, the product was being auctioned off on eBay — in some cases, for double its original price of $5.99. To handle demand, the company created a waiting list on its Web site. To date, some 20,000 consumers have signed on. Jergens continues to ship Natural Glow to retailers and expects the product to ring up $50 million in sales the first year.

LIMA LOOK: Supermodel Adriana Lima made a personal appearance at the Victoria’s Secret flagship in Manhattan’s Herald Square last week to support the launch of the brand’s latest fragrance, So in Love. Lima spent nearly two hours signing autographs and greeting a total of 700 fans, some of which waited outside for more than three hours to meet the Brazilian beauty. “It’s very romantic, it’s a very delicate, light scent,” Lima said of the new fragrance, adding that her favorite item in the So in Love line is the Shimmering Solid Perfume, which comes housed in a chic, jewel-like compact. “You can carry it in your bag, and it looks like a piece of jewelry.” Lima appears in the fragrance’s sultry ad campaign, which was shot by photographer Greg Kadel.

WALGREENS’ SPA DEAL: Walgreen Co. has teamed with spa marketing and media company Spa Finder Inc. to offer Spa Finder gift cards to customers of the drugstore chain. Available in denominations of $25 and $50, the cards can be used within a network of thousands of spas found at Spafinder.com for any spa treatment, service or product. Walgreens is the first retail chain to add the Spa Finder card to its gift card selection; they will be available in 4,700 Walgreens locations. Selected locations also will carry Luxury SpaFinder magazine, a spa lifestyle publication.

MOVING ON UP: It’s moving day for sea-derived skin care brand H20 Plus. The 15-year-old brand has unveiled two new flagship retail locations: one at 511 Madison Avenue in New York and another at 104 Powell Street in San Francisco. Both will replace former locations in each city, at 650 Madison Avenue in New York and at 174 Geary Street in San Francisco. Each store is 1,000 square feet and features white and aquatic tones, translucent glass fixtures and sea-inspired visuals. The relocations are part of a new focus for H20 Plus, which is aiming to concentrate on key retail markets with more inviting, improved retail spaces, according to the company.