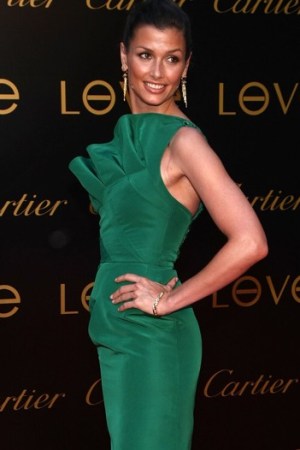 PRETTY FACE: Garnier Nutritioniste skin care has tapped model and actress Bridget Moynahan as its latest spokeswoman. Moynahan joins Sarah Jessica Parker and Alana de la Garza as a rep for the brand and is slated to appear globally in both print and TV ads for Garnier’s Ultra Lift collection in July. Maybelline New York-Garnier president David Greenberg said of the new partnership, “Her class, grace and accessibility make her a model representative of the Garnier brand. Most importantly, she exhibits a likable, healthy beauty that speaks to our consumer in such a positive way.” Parker will appear as the face of Ultra Lift Pro and de la Garza is the face of Skin Renew.

GOOD WORK: Lancôme has become a patron of the Carla Bruni-Sarkozy Foundation, whose goal is to promote access to culture, education and knowledge to fight social inequality. It was founded by Bruni-Sarkozy, France’s first lady. Within the foundation, the L’Oréal-owned brand has helped launch a program called Lancôme Revelations, which was conceived for students in disadvantaged communities in France during their final year of high school. “The program’s mission is to introduce these students to the creative professions, bring out their artistic abilities, reveal their true talent and accompany them as they pursue further studies,” stated Lancôme and the Carla Bruni-Sarkozy Foundation. This includes introducing the students to a wide range of creative professions and offering personalized educational guidance. In the first year, approximately 20 high schools will be involved in the program. Youcef Nabi, president of Lancôme international, stated the brand is honored to have been chosen “to help restore young people’s confidence, enabling them to envisage a fulfilling future in the arts.”

SUPERMARKET SWEEP: Tesco opened its first beauty shop-in-shop on Nov. 9. Dubbed Beauty Shop, the space houses makeup by brands including L’Oréal Paris, Rimmel, Maybelline and Max Factor, as well as fragrances. Located in a Tesco store in Chesterfield, England, the shop-in-shop is staffed by beauty advisers. “For many women, shopping for their beauty products while on a general [shopping trip] is the ultimate in convenience as well as ensuring that they buy their must-have items at the best possible price,” stated Jenna Bannerman, Tesco’s commercial beauty manager. “We are seeing particularly buoyant sales in the cosmetics sector, especially within our face and mascara range of products.” The supermarket giant is also introducing fragrance counters in its almost 200 Tesco Extra stores across the U.K.

ABSOLUTELY FREE: Absolute Cosmetics, a free beauty magazine, will launch in London on Sunday. The magazine, which will be published quarterly by fledgling firm Jay Kay Publishing, is meant to raise awareness of the benefits of the cosmetics industry and appeal to consumers and practitioners alike with content written by medical professionals. The first issue, which will have a combined editorial and advertising page count of up to 36, will include articles about facial fillers and choosing a practitioner. Absolute Cosmetics, which will share some content with MyFaceMyBody.com, will have an initial circulation of 10,000 copies. The magazine will be distributed in cosmetics clinics, beauty salons and gyms, among other locations.

HAIR-RAISING: Hairdressers in the U.K. are asking their clients to combine doing good with looking good. Stylists such as John Frieda, Daniel Hersheson, Mark Hayes, Nicky Clarke and Louise Galvin recently kicked off a fund-raising drive for London’s Great Ormond Street Hospital. Dubbed HAIRraising, the drive aims to raise about $1.5 million, which will go toward opening new theaters for the children’s hospital. Salons that sign up for the fund-raising may, for instance, host events or invite customers to add a dollar or two to their bill to aid the hospital.

CEW WEST: During the CEW’s second West Coast event in the last year, Thia Breen, president of North American operations for the Estée Lauder Cos. Inc., warned that the pre-recession consumer is not returning. “I think we have changed forever,” she said, detailing that consumers are trading down to lower-priced skin care products within the Lauder brand. Despite the economic changes, Breen insisted that Lauder’s commitment to department stores is unwavering. “Our future is based on department stores,” she said. “While I have many brands that aren’t in department stores, whether it’s Aveda [or] Bumble and bumble, the majority of the profits out of the 29 brands still resides in department and specialty stores.” The CEW event, titled “Building Beauty, Brands and Careers” and moderated by Martha McCully of MMC Media LLC, was held at the Beverly Hilton last week.

SOCIETY REPORT: Huntington Beach, Calif.-based brand Beauty Society is building upon the success it’s had in Nordstrom with $98 Enormous Lash by launching three products this month at the department store’s 125 doors and 15 spas. The products are $28 Enormous Mascara, $28 Brow Doctor and $28 Draw the Line, a black liquid eyeliner intended to help enhance lashes. For holiday, all four products are packaged together in a $119 gift set.