Cutting-edge technology is being found in spas more than ever before. 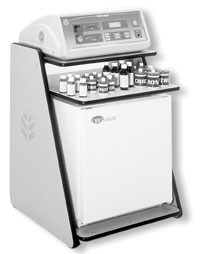 LOS ANGELES — Cutting-edge technology is being found in spas more than ever before. As the arena of medical spas continues to expand, spa equipment manufacturers are coming up with increasingly high-tech ways to help people relax and to speed up the efficacy of their treatments — be it with newfangled devices that use broadband wavelengths, or chairs that provide music to jive with a user’s personality. Here, some of the latest innovations.

The Titan was designed to tone up loose skin, especially in people who have lost a lot of weight rapidly, or for those who are predisposed to sagging arms and necks. Produced by Cutera, a company based in Brisbane, Calif., the Titan is essentially a device that looks like a projection screen. An attached handpiece is held against the skin, and cold and hot pulses are alternately applied to the epidermis using infrared light. Anu Momi, a laser specialist at the Davis Cosmetic Spa in Cherry Hill, N.J., where the Titan was recently introduced, said this is a completely nonsurgical way to tighten and tone up skin, often after just one session.

“If there is fat in the skin, there won’t be a good result,” said Momi. “The skin needs to look like paper to begin with.”

Two-second pulses heat up the water inherent within the third layer of the skin, causing the collagen to “denature,” or thicken and elongate collagen fibers. There are no side effects, said Momi, adding that the most damage that could happen from the exposure is a slight, temporary blistering. “It’s completely safe, and 80 percent of people see results right away,” she said.

Treatments using the Titan are often recommended monthly for three months. Each session lasts between 30 and 40 minutes. Prices for the treatments vary according to the part of the face or body being treated, running from about $800 for the forehead to $1,500 for the full face.

Another noninvasive therapy, La Fleur Reparer, uses electrical currents to stimulate pores and cells, rejuvenating and toning the skin. The system also “reads” cells that are not functioning at their peak and automatically releases the right amount of electrical stimulation to redress any imbalance.

“The technology has been in the clinical and medical fields for two decades,” said Cynthia Loeffler, owner of La Fleur, the Minneapolis-based company that makes the equipment.

Metal electrodes are placed on the surface of the skin, allowing the instrument to analyze the epidermis as if it were reading from within the tissue.

“What we’re trying to do is supply the correct amount of energy so the skin can dump out its toxins and turn on the mechanisms that are appropriate for healing,” she said.

The machine costs $15,000, and is currently in a few spas around the country, including the Standard Hotel in Miami and the Fountain Spa in New Jersey. Treatments can cost anywhere from $30 to $150, but the various attachments with the machine allow it to be used for any number of applications: antiaging, acne control, stress management and cellulite treatments. “We’ve been able to deal with some of the problems medicine has had difficulty with, like muscle/disk problems or pinched nerves,” said Loeffler. A series of gels, creams and other products were recently introduced to be used in sync with the procedures.

Instead of the standard reclining chairs seen in most spas, often used before and after treatments, SO Sound Solutions in Lafayette, Colo., has come up with what it describes as “the Ferrari of chairs.”

Based on the principles of sound healing, and designed to be a treatment in itself, the chair is made of carbon fiber (although a less expensive wooden one is also available). Music comes through something called “sound hearts” — transducers that are similar to speakers, located at points on the chair that resonate with different aspects of the human body. Gentle vibration also helps to relax and soothe.

“This chair was designed from scratch, to elicit certain musical tones and really to honor a full range of musical vibrations,” said Suzannah Long, the company’s co-founder. She claims that after a few minutes in the chair, the heart rate starts to level out, brain waves become more balanced and coherent, and people breathe more deeply.

The carbon fiber model, specifically molded to the human anatomy, sells for $7,700, with the wooden version available for about half that. Now in use in a few spas in Colorado, California and Atlanta, a stint on the chair goes for around $40 to $60 an hour.

Nearly deep-freezing the skin is the idea behind some equipment being introduced to the spa market by Integree USA, based in Irvine, Calif. The Italian-made Criosystem machine, which recently debuted in the U.S., is the core component in a roster of products put out by the company, designed to treat everything from cellulite and stretch marks to acne and scarring. The machine, which has a price tag of $25,000, has an ice cylinder attached to it, which draws on pulsing currents to distribute frozen active ingredients to deep skin tissue. Although the mechanics remain the same, different ingredients treat different beauty issues, so treatments can be customized.

“The results are more effective than a traditional facial, because the products are applied to the skin using a higher current than any other machine out there,” said Nancy Lin, Integree’s technical director. The company’s product lines, designed to work with the equipment, include cleansers, anti-wrinkle creams and essential oils.

The concept of cryonics in spa treatments appears to be catching on. Kelly Kinetics, a company in Minnesota, has created a device that was originally used by sports therapists but is now popping up in spas. The handheld device comes with two silver rods; one heats up, the other is immersed in ice cold water before being applied to the body. “The steel holds on to the heat and cold for a very long time, and the combination of heat and coolness on the body is very therapeutic,” said Jamie Ahn, owner of the Acqua Beauty Bar in New York, which has created the Acqua Cryo Thermal Massage based on the system. She has used it on clients with neck and back aches, and says the technique is something of a “medical massage.”

“The heat helps to loosen up muscles, and it’s a very smooth-flowing machine,” she said.

The device itself wholesales for $200, while massages with it cost around $150. The machine can also be purchased for at-home use.