Spas Seek to Move Beyond Pampering

With growth slowing, the spa industry is shifting focus from pampering the elite to health and wellness for all. 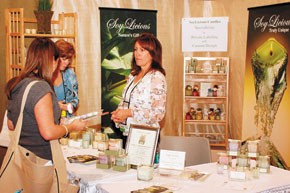 KISSIMMEE, Fla. — With growth slowing, the spa industry is shifting focus from pampering the elite to health and wellness for all.

To keep loyal devotees, spas are moving beyond basic treatments to more personalized experiences that treat the whole person. Using music, biofeedback, meditation and yoga, spas are not only touting stress relief, but nutrition, fitness and how to get a better night’s sleep.

By stressing healthy lifestyles, the industry hopes to demystify the spa for the estimated 75 percent of Americans who’ve never visited one.

“Spa is no longer just about lotions and potions,” said Jim Root, chairman of the International Spa Association. “Spa is not a place, but a lifestyle of wellness, aliveness and happiness.”

The inclusive tone was reflected in products, services, education and speakers at the International Spa Association’s conference, held Nov. 12 to 15 at the Gaylord Palms here, where the event drew more than 130,000 attendees to view an eclectic mix of products from 280 exhibitors. Over 40 educational and networking events included keynote speeches by writer Maya Angelou, who closed the event.

“The show has gone beyond skin care and equipment exhibitors to include the softer side, with music, clothing and candles,” said Root. Though high-tech equipment is still a part of the show, “it’s now more about high-touch,” Root said. ISPA, based in Lexington, Ky., is expanding internationally, with 3,000 members in 76 countries.

In the U.S., the spa industry’s rapid growth of the past decade has slowed, according to the Spa Industry Study presented during the conference. Total revenues of $9.4 billion in 2006 declined from $9.7 billion in 2005. The number of U.S. spas, 14,600, is still rising, but at a slower pace, with medical, resort and destination spas outpacing the growth in day spas.

Industrywide, profits increased, more attributable to price increases than consumer demand, which has changed little since doubling from 1999 to 2001.

“We have to eliminate barriers of price and time constraints to be accessible to everybody, and change the perception from pampering to staying healthy,” said Lynne McNees, president of ISPA. She urged spa owners to consider niche markets, including men, who make up 31 percent of U.S. spagoers, as well as teens, who still offer opportunity.

With recyclable print materials, water coolers rather than plastic bottles and other programs, the ISPA show reflected a larger trend toward environmental concerns, along with exhibitors who had individual green and social initiatives.

At ISPA, natural, organic and botanical were the big skin care buzzwords, as exhibitors served up a cornucopia of products with tropical fruits, coffee and tea as key ingredients.

The crossover of fashion in the spa industry was also evident, not only in the number, but in the changing nature, of the clothing and accessories exhibitors at ISPA.

Anatomie, an active lifestyle brand, bills itself as “spa chic.”

“Our customer wants something besides the basic silhouettes and dull colors that have been in the market,” said Katlin Boyer, sales director of the Nice, France-based line that offers fitted leggings, jackets, tanks and T-shirts in luxury French and Italian fabrics that wholesale from $40 to $145. Boyer said she picked up 70 accounts at ISPA, from spas who are adding or expanding clothing in their retail offerings.

Responding to increasingly “green-minded” consumers, ISPA attendees shopped the exhibit floor for natural, eco-friendly skin care, cosmetics and accessories that would make their spas stand out.

“I’m looking for product lines that support the message of collective well-being,” said Jeremy McCarthy, director of spa operations development and marketing for Starwood Hotels and Resorts. “People are so time-starved and bombarded with technology. We want ways to make them feel better.”

Creating an uplifting experience is the lynchpin of Starwood’s new Heavenly Spa brand, open in six Westin hotels, and expanding to a dozen others, said McCarthy. Among other “rituals,” guests are encouraged to symbolically place their cares is “burden baskets,” before services and treatments.

McCarthy bought eco-friendly robes and spawear in soy and bamboo fibers from Calispia, and T-shirts with inspirational messages such as “Breathe Deeply.” He also considered Sleep Garden’s DVDs that promote better sleep.

To provide the most personalized experience for guests, Barbara Stirewalt, spa director for The Spa at Mohonk Mountain House in New Paltz, N.Y., shopped ISPA for “partners, rather than vendors, that will work with us for special private label products, services and brands,” she said.

She bought customized colors in mineral cosmetics exclusively for her spa from La Bella Donna and specially programmed playlists and CDs by Prescriptive Music.

She also bought environmentally conscious bamboo spa uniforms from Yeah Baby and spawear by Calispia to sell in the spa.

“Our consumers are extremely concerned with the green movement, so we’re always careful about recycling, and using products that are environmentally friendly,” she said.

The spa has beefed up meditation, stress relief and antiaging programs, offering many on a year-round basis, said Stirewalt.