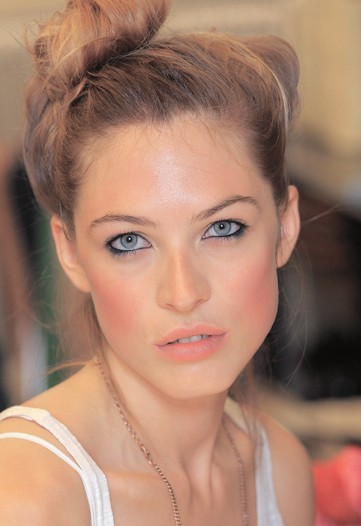 Ultrafeminine beauty isn’t child’s play. Inspired, no doubt, by the upcoming release of Tim Burton’s Alice in Wonderland, as well as the smash success of animated films like Pixar’s Cloudy With a Chance of Meatballs, a dolly aesthetic pervaded many runways, be it the saturated pastel makeup colors at Luella and Louis Vuitton or the naïve topknots at Marc Jacobs and Issa. Drawn-on, exaggerated lashes at Ruffi an and Miu Miu made the parade of models resemble a row of china dolls that no girl could resist. The looks ranged from Barbie-still-in-her-box (see Viktor & Rolf’s gravity-defying tulle) to all-out Alice adoration (to wit, Christopher Kane’s gingham, Peter Pan collars at Moschino and big bows across the board).