The new owners of Bliss spas, Starwood Hotels, have an aggressive expansion campaign that includes new locations, products and services. 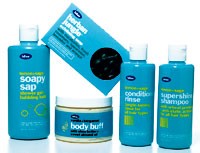 Shiseido in Talks With CVC to Sell Personal-Care Business

NEW YORK — There will soon be a lot more Bliss to go around.

When the spa’s former majority owner, LVMH Moët Hennessy Louis Vuitton, sold its 70 percent stake in Bliss in January to Starwood Hotels & Resorts Worldwide Inc. for an estimated $18 million, it set a chain of events in motion that will lead to more Bliss locations around the world. That’s because the beauty brand’s new owners plan to install Bliss Spas in a number of its upcoming W Hotels worldwide — and plan to retrofit several existing locations to include Bliss. Starwood also is beginning a product rollout to its existing W Hotels, a move that will eventually install Bliss products as amenities in some 5,500 of its guest rooms globally. Bliss also will be a part of next week’s Olympus Fashion Week here.

Founded by Marcia Kilgore in 1996, Bliss started as a SoHo spa with word-of-mouth recommendations that led to months-long waiting lists. Kilgore, who recently gave birth to her first child, remains on board as chief creative consultant, with responsibilities including creating new treatment trends, developing products and writing catalogue copy. Kilgore continues to be involved on a daily basis and is now working closely with Tyler Morse, the brand’s new president, who has an aggressive growth strategy in mind for Bliss.

Morse, a former investment banker with a Harvard MBA who was at one time an assistant to Starwood founder and chairman Barry Sternlicht, was named president of Bliss in April. And he’s the first to admit that Bliss has come a long way in its eight years of existence. Before founding Bliss, Kilgore had owned and operated a facial-and-nail salon called Let’s Face It. Soon afterward, she decided to branch out into body treatments and opened Bliss’ first location in SoHo.

Morse plans to continue running the existing three spas and the QuickBliss locations, but he is particularly excited about the brand’s soon-to-be-opened fourth location. The third Bliss in New York will be located at W New York’s 49th Street and Lexington Avenue location and is set for a November opening. When completed, it will be the largest of the Bliss locations, comprising more than 23,000 square feet spread over two floors.

The space, designed by architects at Janson Goldstein LLP, will include a ground-floor retail boutique and a manicure-pedicure lounge with a conveyor belt to deliver sterilized nail tools. The lounge also will include four movie stations, equipped with personal headsets, flat-screen TVs and DVDs. Upstairs will be 17 treatment rooms including couples’ rooms, designed for tandem massages; spa suites; combination hotel-treatment rooms with oversized jacuzzis, and a gym. Check-ins for services will be made a bit easier — not to mention high tech — with an assisted self-serve system consisting of wireless notebook computers that sync to Bliss’ appointment mainframe.

Special touches also are planned for the locker rooms. The women’s version will feature a hammam — a waterfall-walled, aromatherapy-infused steam room — as well as a sauna, showers, wine, cheese and chocolate. The men’s locker room will be complete with digital lockers, an XBox, steam showers, a sauna, heated shaving cream, sports magazines and beer.

There’s a perk involved for W hotel guests — priority booking, or as Kilgore calls it, “BIP” (Bliss Important Person) service. “We’re not looking upstairs for guests, but we want this to be an inducement [to stay at our hotels],” said Morse. “Only a few” appointments will be reserved for hotel guests, with the rest to be booked through Bliss’ regular appointment lines, he said.

As well, Morse has ambitions of taking the brand’s reach far beyond New York and London — although he doesn’t plan to be the Starbucks of the spa world. “We’re looking at having one Bliss per market, for the most part,” said Morse, adding that a very few major markets — including New York and L.A. — will have more than one Bliss door. “We’ll always be looking at opportunities, but in the next five years, I’d estimate that we will open 10 to 15 Bliss Spas globally.”

Currently, there are 19 W Hotels worldwide — of those, Chicago will get two Bliss doors, at City Center and Chicago-Lakeshore, in late spring-early summer 2005, as will the chain’s L.A. location in Westwood around the same time. A W San Francisco Bliss location will open in early 2005.

“These spas will function as stand-alone, profitable businesses,” said Morse, adding that Bliss is and will continue to be an independent subsidiary of Starwood. “Bliss is not a W Hotel Spa — rather, Bliss Spa happens to be located inside a W Hotel. Our goal is to introduce Bliss to markets that don’t currently have them, to open the best spas under the best hotel roofs in every major city and to maintain Bliss’ brand integrity.”

Bliss Spas in the chain’s properties in Dallas and Wailea, Hawaii, on Maui, are also in the pipeline, although they will be installed “sometime beyond 2005.” As well, Fesdhu, the Maldives, will get Bliss when a W Hotel opens there in 2006.

Starwood also is planning to open W locations in Shanghai, China and Hong Kong, scheduled for 2008 and 2010, respectively; Barcelona, in 2008; Scottsdale, Ariz., in 2007, and Hoboken, N.J., in 2006. A Montreal W is to open this month. While final decisions on which, if any, of these properties will get Bliss Spas are still pending, Morse added that he believes Bliss would fit in particularly well in Asia, “and I would like to be there within the next few years.”

Closer to home, Morse is overseeing a repackaging campaign for Bliss products, which will shift colors from the standard white with darker blue accents to a light robin’s-egg shade. The redesign, which is beginning to roll out now and which will be completed by yearend, is intended to unify all of Bliss’ products, Morse noted. Bath and body products, going forward, also will be merchandised under three scent categories, Lemon/Sage, Mint and Vanilla. Other scents are likely to be added in the future, he noted.

This month, Bliss also will roll out five new body care services — The Betweeny Wax, High Heal-er, Arm-istice, Cold Feet and Shrink Wrap — with a sixth service, The Hangover Herbie, coming Stateside in November. The Hangover Herbie, currently only offered at Bliss London, includes an essential oil rub-on and wrap, a cleansing and revitalizing facial mask, a 15-minute foot massage, an antimigraine massage and an oxygen spray for skin.

Four new products will roll out this month — Herban Jungle Soap, Vanilla and Bergamot Body Buff, Vanilla and Bergamot Bubbling Bath and Shower Gel and Fabulous Foaming Face Wash. An additional four are on tap for October: Go Bust Breast Firming Cream (100 percent of the profits of this product will be donated to Rethink, a breast cancer-awareness campaign), Lemon and Sage Supershine Shampoo, Lemon and Sage Conditioning Rinse and Orange and Spearmint Sugar Scrub. Nine limited-edition holiday gift sets are planned for November.

Bliss products are currently sold in about 279 doors globally, including Bloomingdale’s, Harrods, Harvey Nichols, Neiman Marcus, Nordstrom, Saks Fifth Avenue and Sephora. Products also are sold through the Bliss catalogue, which currently is sent to 750,000 readers each month. The catalogue also offers an online ordering system at blissworld.com.