NEW YORK — Straight hair was practically a no-show on the runways at New York Fashion Week for fall 2005, and sales of many straight-hair products are fizzling at mass. But one company says a sleek, neat coif is what many women still crave.... 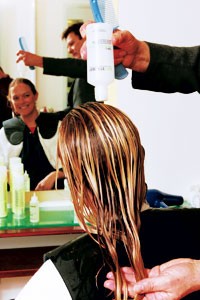 NEW YORK — Straight hair was practically a no-show on the runways at New York Fashion Week for fall 2005, and sales of many straight-hair products are fizzling at mass. But one company says a sleek, neat coif is what many women still crave.

EasyStraight, one of hair care’s newest players, managed to generate $2 million in sales in the home perm-relaxer kit category last year, despite a 3 percent sales dip for the segment, according to data firm Information Resources Inc., for the 52-week period ended Jan. 20, excluding Wal-Mart. EasyStraight first arrived on 12,000 mass retailer shelves in January 2004. The kit includes everything required for a four-step, one-hour, at-home straightening treatment, such as conditioning oil, straightening cream, straightening sealant and a leave-in conditioner. Treatments are designed to last as long as six months.

Maria Dempsey, president of HM Mane Solutions LLC, which makes and distributes EasyStraight, explained that the item’s appeal extended beyond customers to retailers since it is an industry first. Dempsey, a former John Frieda Hair Care marketing executive, however, is looking over her shoulder at competitors.

“We’re the only product like it on the market — so far,” Dempsey said.

Sales of salon brands in mass stores grew, however, such as Straight Sexy Hair shampoo, which increased 33.7 percent in sales, and Matrix’s styling line, Sleek Look, which grew 63 percent.

The continued quest for straight hair, according to Haime Muñoz, founder of EasyStraight and owner of the Haime Muñoz salon in Manhattan, is more than just a certain look.

“It’s not straight hair that is keeping the interest of people; it is more about the manageability of the hair,” Muñoz said, adding that he believes stick-straight hairstyles are out, but straight hair with “body and movement” is in.

His at-home straightening kits, which retail for $29.99, are so popular that every Wednesday, Muñoz dedicates his whole day teaching 10 to 15 interested EasyStraight consumers at his salon how to best use the product.

“Trying to teach people how to use it is our big challenge at this point,” Muñoz said. “White women have no idea how to [use home straighteners] because [relaxers] have only been around for black women. Many women think that, if they leave the product on longer, it will work better,” Muñoz said, explaining how such a move could overrelax hair. The salon version of his straightening process begins at $350.

Muñoz and Dempsey are so convinced consumers are still in need of more straightening products — this year the kit will be sold in 17,000 stores, including Walgreens, Rite Aid, Albertsons and Target — the two are launching an EasyStraight product line.

Beginning next month, EasyStraight shampoo, conditioner and a Smooth Finish Gloss will be available for $8 each. Dempsey contacted former John Frieda director of research and development, Joe Cincotta, to develop the products, along with Muñoz.

Cincotta explained that shampoos are formulated with essential oils and minerals, including cocamide MEA and sodium laurolyzed hydrolyzed silk. Conditioners are packed with lanolin, coconut oil and hydrolyzed keratin, a wool protein that works to strengthen hair. The gloss isn’t a styling product, he said, but rather a detangling and smoothing item, formulated with sun protection and coconut oil.