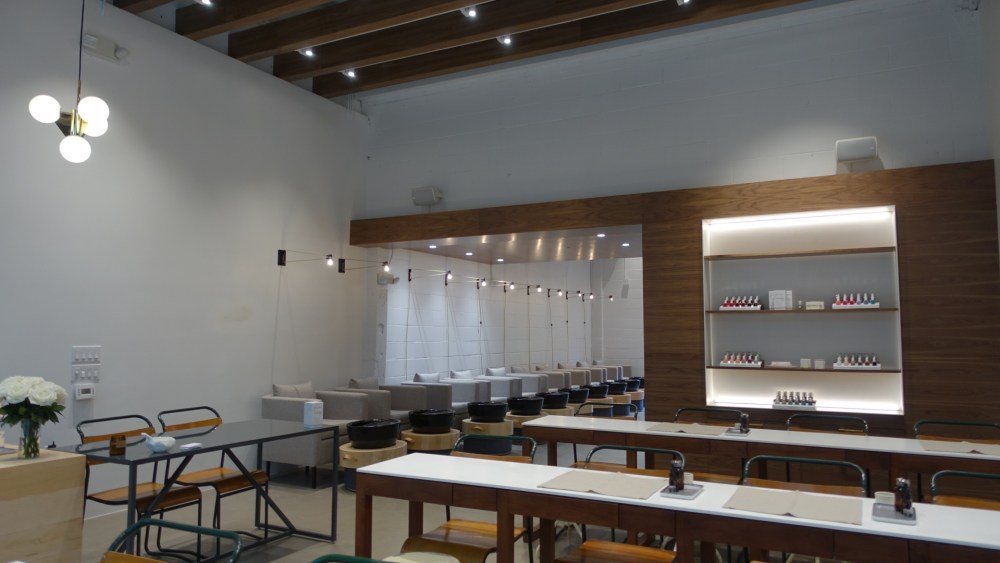 The West Coast has a new safe haven for nails.

“New York has been amazing and we hopefully will continue to grow in New York, but it was really important for us to try our concept in a warm climate,” said Nadine Abramcyk, cofounder of Tenoverten. Extending to L.A., however, meant negotiating the city’s driving culture to figure out the best place to open, a task that, as a New Yorker, Abramcyk admitted was daunting. She liked the industrial, urban feel of Platform, and its location amid office and residential developments.

During a visit last week, Platform’s crowds surprised Abramcyk. She was surrounded by Angelenos rushing to and from work, getting caffeine or juice fixes, and squeezing in exercise, and was encouraged that nail services could become part of their routines. “It’s a lot of young, very fashionable people and a lot of families. We are right next to Blue Bottle and, during the week, you see a lot of people coming for their coffee breaks, and there is strong clientele coming for lunch as well as people filtering in and out of SoulCycle,” she said. “It was really a lovely, eclectic mix.”

Despite her positivity, Abramcyk understands Tenoverten will take time to build at Platform. She divulged the company’s salons hit their strides after about two years. “We pay back our investment faster than that. When I say hit their stride, I mean that’s when they reach the point where they are as profitable as we want them to be. That’s the peak. We are profitable before two years, but that’s when, on a busy Friday, we have as many manicurists as we can working,” said Abramcyk. At Tenoverten’s TriBeCa location a full employee load includes 18 manicurists and she predicted the Culver City salon could eventually require that number.

All six of Tenoverten’s salons provide the same services at the same prices. The signature manicure is $25 and the signature pedicure is $40 with nail menu items rising up to $60 for a custom hour-long pedicure. Waxing services range from $10 to $70, and sugaring, a waxing alternative, is priced at $20 to $80. In Los Angeles, Abramcyk anticipates sugaring will be more popular than it is in New York, where it isn’t widely known. She also mentioned gel manicures are big in L.A., leading to Tenoverten doing quite a bit of gel manicure removals, although its salons don’t offer gels.

In each salon, Tenoverten cultivates an apartment vibe. However, it tries to tweak the design of the locations to suit local environments. The Culver City salon keeps with Platform’s and the area’s industrial aesthetic with cement flooring and an exposed ceiling crossed by walnut beams. A retail space within the store features roughly 50 brands such as Herbivore Botanicals, RMS Beauty, Josh Rosebrook, Soapwalla, Honey Girl Organics, Grown Alchemist, Jao Brand and Tenoverten’s own collection containing polishes without formaldehyde, dibutyl phthalate toluene, formaldehyde resin, camphor, ethyl tosylamide, xylene and triphenyl phosphate.

Going forward, Abramcyk said Tenoverten would ideally introduce two to three locations annually. In greater Los Angeles, where Abramcyk’s sister and Tenoverten partner Jaclyn Ferber has settled and oversees the Platform salon, Abramcyk pointed to Pacific Palisades and West Hollywood as neighborhoods Tenoverten is evaluating for future locations. In New York, where a third partner, Adair Ilyinsky, is and Tenoverten’s operations are based, the focus is on the Flatiron district for an upcoming salon. Houston is under consideration, too, for a branch of Tenoverten.

“We are really an upscale version of the neighborhood salon,” said Abramcyk. “I feel that there are so many neighborhoods in New York, where I live, and in L.A., where Jaclyn lives, where we can go. We are excited to see what’s next.”