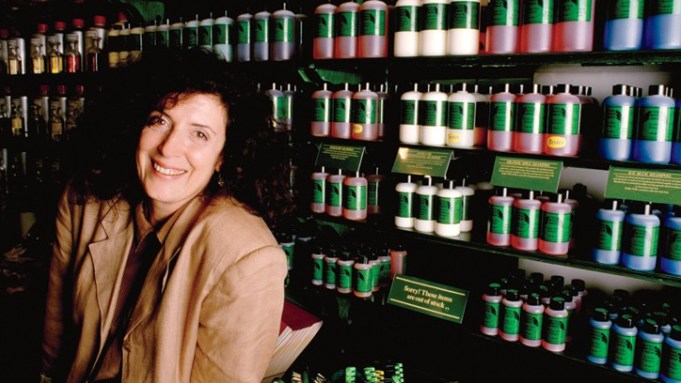 As its parent company turns 100, The Body Shop, L’Oréal’s enfant terrible, is showing no signs of shedding the scrappy spirit that’s been its leitmotif for more than 30 years.

Founded by the late Anita Roddick in 1976 and acquired by L’Oréal in 2006, the brand and retailer, which has long been a flag bearer for ethically sourced and naturals-based cosmetics, is determined to continue to offer a vision of beauty that goes well beyond skin deep.

“That’s the magic of the brand,” says chief executive officer Sophie Gasperment, of The Body Shop’s tradition of offering products for personal use teamed with messages and actions that are meant to make a difference to the world, such as fair trade, which the brand refers to as community trade, and campaigns against climate change and violence in the home. “It’s why our people join. It’s why our customers come to the stores. It’s how our products are engineered from the start. It’s an integral part of the business.”

And the brand doesn’t shy away from delivering eye-opening messages alongside Deep Sleep moisturizer. In August, for instance, it will launch a global campaign dubbed “Stop Sex Trafficking of Children and Young People” in association with ECPAT International, a collective of organizations working to end child prostitution, pornography and trafficking.

“Part of The Body Shop’s DNA is to help give a voice to those who don’t have a voice of their own,” says Philip Clough, The Body Shop’s global brand director. “That’s why we feel that it’s a burning obligation to bring this issue to the fore and put a sustained campaign behind it. It’s the third-biggest criminal industry and the fastest growing.”

“We knew [sex trafficking] was a theme that Anita was very keen that The Body Shop do something about,” says Gasperment, referring to Roddick, who died in 2007 at the age of 64. Gasperment adds that the company decided to focus particularly on the trafficking of children and young adults, as it felt it could have a significant impact on the issue by raising awareness and changing attitudes.

The Body Shop’s willingness to champion such difficult-to-digest causes and controversial issues — such as testing beauty products on animals, global warming ad the beauty industry’s seemingly homogenous perception of beauty — have been integral to the brand’s development. Indeed, when L’Oréal made acquisition overtures in 2006, the move was seen as controversial since Roddick had frequently railed about the beauty industry in the past.

“At the time of the acquisition, some customers had some questions about whether the things they loved about The Body Shop might change,” says Gasperment. “That is not much on the agenda now, as three years on they can see the values are stronger than ever and the commitment that the L’Oréal group took at the beginning — that it would be a ringfenced separate entity within the group to make sure the very specific side of this brand was retained — has been achieved. It’s not something we hear in our stores anymore.”

Roddick, who, with her husband, Gordon, sold about an 18 percent stake in the company, backed the L’Oréal bid. “It’s not selling out,” she said at the time, at a press conference in London in March 2006.

“Businesses aren’t found in nature,” she later relayed on The Body Shop’s Web site. “Businesses aren’t deemed by God. They’re made by men and women, and they’re subject to change. What you see, I saw years ago as a battlefield; enemies are now our staunchest supporters. People change. They see the value of what small companies do. They want to learn from other companies. It’s not deemed in nature because they’re big and huge that they’re going to diminish our DNA.”

Gasperment adds that executives at the brand aim to protect and enhance The Body Shop’s genetic makeup. Its fair trade efforts, for instance, were stepped up following the takeover.

“The pace at which we’re developing community-trade partnerships is increasing,” she says, adding that a line of products using organic cold-pressed virgin coconut oil sourced from Samoa will bow in June, and The Body Shop’s tea tree oil products will be relaunched in August using community-trade tea tree oil from Kenya. “That’s 600 farmers and families and communities that will thrive and send their kids to school and have clean water.”

In addition, L’Oréal has begun sourcing ingredients, including olive, soy, coconut, sugar and sesame, from The Body Shop’s community-trade partners for its other brands, according to the executives.

“It’s fantastic,” says Gasperment, adding that the brand has made a concerted effort to relay information about its values and activities more in recent times, as its customers are interested in learning about them. “At the end of the day, if we can provide to these communities more visibility in the longer term and more volume in the longer term, then they can engage in more projects for their communities.”

She adds that, while The Body Shop is effectively run as an independent entity within L’Oréal, cross-pollination of ideas within the group exists. A steering group, for instance, comprising members of The Body Shop’s community and ethical trading teams as well as members of L’Oréal’s organic and natural laboratories, meets to share ideas.

“Where it makes sense, we try to exchange knowledge and expertise, like on community trade,” says Gasperment. “When we look at a particular market, we look at whatever information or perspective The Body Shop has on that particular market or country and what the L’Oréal group has and that’s complementary. We have stores, so we have direct connection with customers, which is very unique. And the L’Oréal group has other insights so [the partnership] is quite powerful.”

With more than 2,500 stores in 64 countries, The Body Shop’s strongest market remains the U.K., where the brand opened its first shop in Brighton.

Gasperment says the chain’s geographical split is evenly spread between the Americas, excluding Latin America — where The Body Shop is not present; Asia-Pacific and Europe, the Middle East and Africa. “It’s a good mix,” she says. “In the current environment, it’s good to be spread evenly around the globe.”

For full-year 2008, The Body Shop reported sales down 3.9 percent year-on-year, to 756 million euros, or $1.11 billion at average exchange. On a like-for-like basis, revenues increased 4.6 percent.

“The brand is in good shape, resilient, which I think is a good sign for the future,” says Gasperment. “You can always do better. But being plus-3 percent this year in the current environment shows the attraction of the brand and the resilience of the brand.”

With an accessibly priced product offer and a broad consumer base, as well as a three-decadelong commitment to social and environmental issues, Gasperment believes The Body Shop is well placed to weather the current economic storm.

“People are looking for meaning beyond their shopping experience,” she says, adding that, in the last quarter of 2008, while financial institutions were in turmoil, customers increasingly looked to talk and interact in Body Shop stores. “They’re also very sharp and can sometimes feel they’ve been lied to for a while by the overall world, and they’re very vigilant. I think the fact that we’ve been doing what we do for more than 30 years in a very genuine way — not always in a perfect way, we’re not saying we’re perfect, but always very genuine in the intent and certainly in the commitment and the effort we put behind it — I think people see that and will see that even more.”