The Donald Machine Revs Up

With his armloads of licensing deals, Donald Trump, the real estate tycoon, has turned into Trump, the gonzo merch machine. 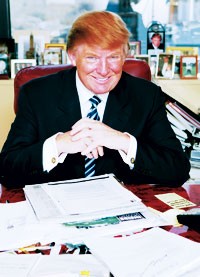 NEW YORK — It started with a line of suits and a men’s fragrance — and now Donald Trump can fill an entire closet, thanks to a series of licensing deals. There are so many products, in fact, that Macy’s East plans on staging an entire Trump men’s fashion show on March 16 in its Herald Square flagship.

Trump, the real estate tycoon, has turned into Trump, the gonzo merch machine. He has become a walking brand laden with armloads of Trump-label merchandise. Among the latest deals: men’s dress shirts with Phillips-Van Heusen Corp., men’s cuff links and other furnishings with the Vendome division of K&M Associates, neckwear with Randa Corp., socks with Paul Lavitt Mills Inc., sunglasses and optical glasses with Eye Wear Designs Ltd. and watches with E. Gluck. The latest deal is for loungewear with JR United Industries Inc., according to Cathy Hoffman Glosser, Trump’s vice president of licensing, who said there are also deals pending concerning luggage, top coats and even candy.

These are agreements that previously had been mentioned as possibilities, and they follow last fall’s foray into men’s fragrance with the Estée Lauder Cos. and men’s suits with Marcraft Apparel Group. Tucked into a distant corner of Donald world there’s even a board game, a talking doll [now on sale at Macy’s for $13.99], and two best-selling books.

Despite a stony silence from the company, reports have been circulating that Lauder is at work expanding the initial 3.4-oz. eau de toilette into an entire men’s line totaling about five stockkeeping units, including an after shave and a 1.7-oz. eau de toilette. In addition, Lauder executives reportedly have been “brainstorming” about other possible applications, even a Trump women’s fragrance — though no decision seems to have been made.

Considering that the distribution for the fragrance initially reached only 400 doors and didn’t even hit counter until mid-November, the December sales volume of somewhat less than $10 million was seen by some as a promising beginning. “We are encouraged,” said one executive. “We know we have work ahead of us to build the brand.”

In terms of women’s apparel, Glosser added that a deal for “an all-encompassing ladies’ line” is being sought as a possibility “down the road.” Considering that he made his name in real estate, a Trump home collection “is in the forefront,” said Glosser. “We don’t have royalty in the U.S. Donald Trump is our equivalent.”

Seeing Trump hold court from a department store stage and play the crowd is the stuff of vivid memory. And what drives the Donald machine is gusto. “The business model is self-confidence,” noted one associate. His personality is an odd combination of outrageous egomania mixed with a surprisingly self-deprecating humility, all held together with tireless — almost obtrusive — charm and lit by a vaguely satanic grin.

The flamboyant megadeveloper, who loves to slap his name on skyscrapers, has no compunctions about describing himself as a brand. In fact, he even attributes his unexpected TV stardom on “The Apprentice” to his zeal for merchandising himself.

“My branding business has become a very big business, and it’s been an amazing business,” Trump said during a far-ranging interview. “I guess you could say the television show ‘The Apprentice’ has been because of branding, or I wouldn’t have been the one to be in the show. Other people have tried to duplicate that show and they failed, miserably.” At least one of the shows he referred to was Richard Branson’s short-lived series.

The well-married Trump, who parlayed his last wedding into a publicity bonanza by landing his bride on the cover of Vogue, sees his appeal as deriving in part from his attraction to women. “My whole life has been about women,” he said. “I love women. If you look at ‘The Apprentice,’ the biggest portion of the show is women. You can’t get huge ratings if you don’t have women.”

When asked why a billionaire would take the time to make department store appearances to hawk $495 suits, he quickly replied, “Well, you saw the crowd that was there [referring to an appearance at Macy’s in September]. We had over 2,000 people for an event that was way up high in the building. I don’t know, there’s some kind of something going on that’s probably very complex, that maybe you can figure out better than I can. But there’s something going on that has been rather amazing.”

But he also can be humble and does not hesitate to make fun of himself. Although his signature “You’re fired” punch line on “The Apprentice” has made Trump a national poster boy for managerial ham-fistedness, he claims to take no joy in the thumbs-down routine. “It’s not easy,” he said, “and sometimes making the right decision is very tough.”

Then the grin returns to his face and he observes, “It’s interesting that people  think that I’m such a nice person now compared to my image prior to ‘The Apprentice.’ When you think of it, all I do is fire people — which tells you how bad my reputation must have been in the first place.”

Considering his apparent relish in projecting himself into America’s living rooms and turning himself into a brand, it sounds surprising to hear Trump admit that celebrity life can be wearisome. In fact, he claims that appearing constantly in the limelight is tougher than throwing up tall buildings. “It’s harder being a celebrity,” he said. “It takes a lot of things, but it does takes energy. You can’t not be feeling well and do this. It takes a lot of drive, or it’s not going to be successful.

“To be a celebrity is very unique. I know a lot of people with money but they could never transform themselves into celebrities. They would be incapable of doing it,” he added, noting that “it takes a look” and “a certain personality — not always necessarily even a good personality, but a unique personality.”

But despite his clear attraction to TV cameras, Trump sees himself as “somebody that knows how to build great buildings.” He identified his single greatest strength as an ability “to get the right locations.” Even though his real estate and casino activities have their well-publicized ups and downs, Trump doesn’t seem to forget his modest beginnings as a son of a builder who managed 10- and 12-store clusters in Brooklyn and Queens — all the while sitting in his glittering office high above Fifth Avenue in Trump Tower.

He not only is a practitioner of real estate development, but he talks like one of its keenest students. Asked to single out a mall he admires, Trump points homeward.

“We have the greatest mall in the world — it’s called Fifth Avenue, Madison Avenue, and the streets,” he replied. “Manhattan has always been very much of a street mall. If you start putting stores up high like I did at Trump Tower, you’ll have mixed results. Yet I was lucky at Trump Tower because I was able to tie the street to the third floor and even the fifth floor,” referring to the rental arrangements with Avon Products and Asprey. Those deals allowed Trump to tie street locations with upper floors and charge higher rents. By consolidating blocks of space, Trump also was able to minimize the square footage normally wasted on nonrental space like hallways. “So I tied the floors to the street and I probably get the highest per-square-foot price of anybody in the nation for a mall— as much as $2,000 a foot.”

He added, “Historically — as in the case of Time Warner — malls don’t work very well in New York.”

Looking elsewhere, he singled out David Simon, chief executive officer of Simon Property Group, as a developer who has “done a terrific job with his malls.” Trump stressed the value of injecting an entertainment factor in mall designs and suggested that if consumers are bored with some malls, “maybe it’s because of the merchandise. The ultimate entertainment is the merchandise.”

One problem that department store anchors have to solve, however, is the competitive edge of Wal-Mart, he said. Trump described Wal-Mart as “a juggernaut” that “seems to be taking business from everyone.

“And it seems to take the business in interesting ways,” he continued. “It goes into the toy business and it starts discounting toys at levels that you can’t make money at and people can’t compete with it. It’s going to be interesting to see at what level that stops. Wal-Mart is a very frightening retailer. An amazing retailer, but a frightening one.”

His real estate activities and love of the limelight sometimes coincide, like in Las Vegas, where Trump is putting up a 64-story condo. “I don’t think I’ve ever sold apartments as quickly as I’ve sold there,” he said. “It’s an amazing phenomenon. People love the feel of Las Vegas. They love the weather, even though it’s very extreme. They love the sunshine.

“It has to do with glamour,” he said. “It’s like Los Angeles. There’s a certain glamour to Los Angeles that most other places don’t have. It’s all about sizzle and it seems to work.

Trump may see himself as a construction trades guy, but when talk turns to showbiz, he grows decidedly more animated. When asked how the current crop of actresses measure up against those of past eras, Trump takes off the gloves with some well-known strong opinions. “It’s a much different world today,” he began. “Britney Spears, when I was young, wouldn’t have made it.