The Dove Salon Lands in Calif. 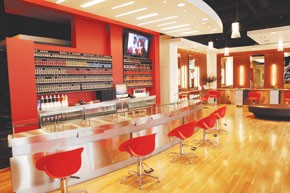 “There is an affluence down here [in Santa Monica], but there is more of a real feeling that appealed to us,” said Dove Legendre. Dove, who has been Dove Legendre’s collaborator for nearly 30 years, added, “We didn’t want to do the predictable thing of Beverly Hills.”

The duo, along with business partner Philippe Legendre, who is also Sonya’s husband (Dove and Dove Legendre used to be married), decided upon a 2,300-square-foot space, which opened last month in the Archstone building, a new mixed-used development with retail, apartments and eateries. “It was a completely empty shell. We were able to do everything from bare walls,” said Dove.

They set out to transform the unsullied spot into an industrial salon with elements of warmth and gave architect Kaveh Amirdelfan an understanding of the seemingly contradictory style by showing him their Los Angeles area homes. “We wanted it to have a very clean, modern feeling, but we didn’t want it to be too sterile and stark,” said Dove. “You can see how confusing it would have been for someone that doesn’t really know your character.”

With Amirdelfan, interior designer Greg Bleier and the partners all on the same page, they vetted some 150 different tiles and woods and searched all over the world for appropriate fixtures and furniture. Red, stain-proof chairs in the salon are from Italy, clear shelving lit up from within hails from Japan and a curved concrete sign behind the reception illuminated by fiber optics was made in Hungary.

The flooring and lighting gave them the most trouble. They settled upon a soft maple for the floor that didn’t soak up color like a sponge. And they worked hard to create even lighting by melding four different types of lights that didn’t overly spotlight customers’ hair to the determinant of their faces and vice versa.

The focal point of the salon is a stainless steel color bar that fits five stations and houses thousands of possible color varieties. “A lot of people say they have never seen a color area that big,” commented Dove Legendre. Explained Dove, “When you are bringing a client over, you can carry on a conversation and keep everything nice and social. The feeling is that you are at your favorite cocktail bar.”

The partners have decades of experience together. The former couple met in England when Sonya was 13 and Christopher was 15, and eventually ran a salon there for 13 years. In 1994, they moved to the U.S., where Shelton Ogle, owner of salons and schools in Texas, hired the pair to be creative directors. They then held those posts at Elizabeth Arden Red Door Salons before jumping to Wella Professionals U.S.A., where they currently are creative directors. Throughout their career, they gained a following for elaborate stage shows and commitment to educating up-and-comers.

For Dove and Dove Legendre, compromise has been critical to an enduring professional relationship. “I have been a bit more outrageously creative and out there, and Sonya is a lot more practical,” said Dove. Dove Legendre added, “Philippe is more in the middle….There is not a right or wrong. When you put them together, it creates a stronger person.”

They foresee several salons in the U.S., including possible locations in Las Vegas, Newport Beach, Calif., and elsewhere in greater Los Angeles. First, they have to fill the Santa Monica location with a staff of 15 stylists and colorists that they choose to pay with a salary rather than on commission. “We have interviewed about 500 hairdressers,” said Dove. “A lot of time we are getting people who say, ‘I have this amount of clients, and you need me in this salon.’ It was such a turnoff. We have gone for people who have great personality.”

Dove Legendre said that, in year two, the goal is for the salon, which ended up costing $700,000 to complete, to generate $1.7 million in revenues, about 20 percent from retail, 40 percent from color and 40 percent from cuts and styling. The salon carries Wella, Sebastian and Crazy Color by Renbow products. For color, prices range from $40 for a consultation to $450 for creative techniques from the creative director. Haircuts are priced from $65 to $175.

“We have always maintained a level of modesty….Truly, we are people that will work hard to do everything we can to do our best,” said Dove. “So far, every time we have put our heart and soul and mind into something, it has worked out.”