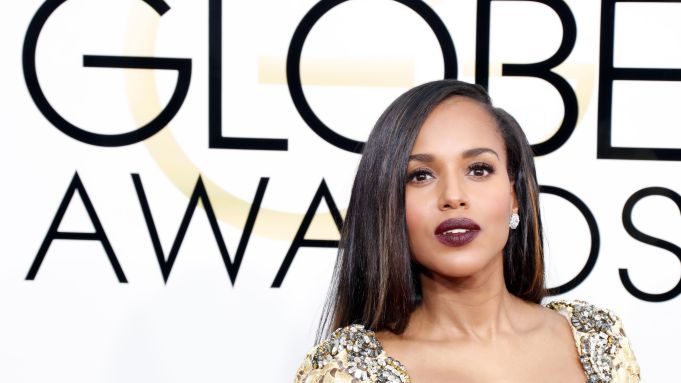 The Golden Globes served up plenty beauty fodder for hungry celebrity followers clicking avidly through social media: It hit hard on many of the major beauty motifs of the moment (sleek manes, metallic eyes, nude and berry pouts, and bold brows, to name a few), but threw some mild surprises (elaborate hair structures, subtle shadows and heavy under-eye armory) into the mix as well. “I am not seeing a specific trend,” declared Mélanie Inglessis, the makeup artist who worked on Ruth Negga and with Chanel for the event, adding, “I’m interested in trying to push the envelope little bit, where and when I can. It’s still a red carpet, so I feel we still have to try to make them beautiful, and you want your client to feel the best they can possibly feel. There is give and take.”

There probably weren’t any looks that will go down as historically bad misses (Sarah Jessica Parker’s Serge Normant-created head pastry, Emma Stone’s hanging strands courtesy of Mara Roszak and Drew Barrymore’s muddled waves by John D will likely be debated), although there could be a number contending for solid wins (Jessica Biel, Michelle Williams and Jessica Chastain delivered statements with understatements). And there was a strong dose of remarkable artistry on display along the way (check out Issa Rae and Janelle Monae’s orchestrated updos, the latter by Nikki Nelms, and Inglessis amplifying Negga’s nude lip by dotting it with a berry matte shade at the center). Here are a few of the notable beauty themes:

Chris Appleton has perfected stick-straight hair on Kim Kardashian, and those slick frizz-free coats are being embraced by more of the red-carpet hair clan. Takisha Sturdivant-Drew sleeked Kerry Washington’s coat; and Amy Adams, Naomi Campbell, and Heidi Klum joined her with forays into flattening. Klum was coiffed by Andy Lecompte and Adams by Laini Reeves.

March of the Middle Parts

The middle part is sort of the black dress of hairstyles: it’s standard, generally flattering and not easily messed up. It’s not a shock, then, that there were a ton of median divides making appearances at the Golden Globes. Lola Kirke and Mandy Moore, whose hair was styled and sprayed by Ashley Streicher, gave a slightly Seventies sheen to the midpoint parade, while Sarah Paulson brought it up to the present in a short hairdo.

Letting their bold lips do much of the talking on the red carpet, Tracee Ellis Ross and Washington opted for delicate shadows that steered very clear of dramatic smoky eyes. Ellis Ross’ makeup artist Jamie Greenberg and Washington’s makeup artist Carola Gonzalez chose to rely on generous varnishes of mascara and rims of dark eyeliner to stunning effects rather than drowning their subjects’ lids in copious amounts of pigment.

Certainly, the Golden Globes offered its fair share of requisite red lipstick (see Ellis Ross, Teresa Palmer and Brie Larson), but nudes were definitely not cast in supporting roles. Mario Dedivanovic chose a neutral tone for Naomie Harris, and Inglessis painted Negga’s lips in one, too. Like Inglessis, Dedivanovic was on duty for Chanel at the Golden Globes. Williams, Thandie Newton, Sienna Miller and Rae also donned lip shades in the nude family for the occasion.

Cara Delevingne gave us the big brow that won’t die — at least this award season, for sure. Hailee Steinfeld, Maisie Williams and Lily Collins, a Lancôme ambassador, sported prominent above-eye whiskers to the Golden Globes. Collins makeup artist Fiona Stiles explained, “Lily’s brows are so incredible, so I mostly leave them alone. I just filled in the arches ever so slightly.” She used Micro-Precision Brow Pencil in the shade neutral brown from her namesake brand Fiona Stiles Beauty on Collins. Williams’ makeup artist Kindra Mann, who accented the actress’ brows with Benefit Cosmetics’ Gimme Brow, reasoned, “The smoky eye needs a strong brow to complement it.”

Layering top lashes and lids with tons of mascara and shadow is all well and good, but the areas underneath the eyes often get short shrift. Not so this Golden Globes. Etienne Ortega applied purple to the bottom of Kris Jenner’s eyes, and Leslie Lopez dabbed the Metallik Platinum shade from Laura Mercier’s new Editorial Eye Palette on the bottom of Parker’s eye with the brand’s Clay Smudge Brush. The makeup artists embellishing Barrymore, Russell and Maisie Williams’s faces went for it with dark frames beneath the peepers.

The updo is a movie award show staple. This Golden Globes, actresses spun that staple for a loop. Gregory Russell intertwined braids atop Lily Collins’ crown in an intricate pattern that rivaled the spectacle that was her rose-festooned Zuhair Murad Couture dress. Rae’s twirled tresses were as sculptural as her Christian Siriano gown, and Monae, who’s been known to accessorize her hair lately, ornamented her lofty style with pearls.