HBA: The Matrix Global Academy in New York’s Greenwich Village is designed to provide a forum to educate and connect with salon owners and stylists. 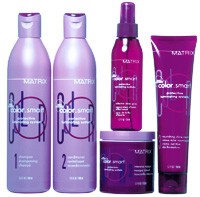 NEW YORK — With a construction crew wrapping up the last of the heavy-lifting this week, Matrix is on track for the Oct. 28 grand opening of its first academy, the corner stone of an aggressive strategy to widen its lead in the professional hair care market.

The 11,000-square-foot Matrix Global Academy located at 435 Hudson Street — in the heart of Greenwich Village — is designed to give the brand a forum to better educate and connect with salon owners and stylists.

The professional hair care brand already has one of the largest teams of educators in the field — some 375 strong, and aims to double that number by the end of next year. Executives commented the academy will reinforce Matrix’s connection with hairstylists in a larger, more visible way.

“The academy is a concrete example of Matrix’s commitment to stylists and salon owners, providing the inspiration that will enable each to transform his or her passion for beauty into personal success,” said Matrix General Manager Francesca Raminella.

In fact, Matrix aims to grow its market share from 16 to 17 percent over the next year. The brand has yielded consistent double-digit annual sales growth against a modest industry growth rate of 2.5 percent, said Sklar.

Since L’Oréal USA acquired Matrix from Bristol-Myers Squibb in spring 2000, the company has worked to ingratiate itself with salon owners and stylists.

“Matrix has been building momentum since the acquisition over the past four years. We’ve grown about 25 percent and we’ve solidified our leadership role in every category — color, hair care and texture,” said Sklar.

Paul Smith, Matrix’s vice president of education, noted that education and training are the underpinnings for a robust future, which is why over the last several years the Matrix team has been busy developing the academy concept.

The company recruited Gensler Architects to transform the downtown loft building into multiuse space — one that could accommodate training, courses, a concept salon, a lounge and retail.

Industry sources estimate the company invested $3 million to build the academy, and that it will likely reach profitability within the next two to three years.

In its first year, the academy expects nearly 3,000 to enroll in its 110 courses — ranging from beginner’s styling lessons for those just starting out to advanced business courses for salon owners, covering topics such as marketing.

Gensler’s vision for the academy was to show the linkage of art, science and the beauty business through the use of bold architectural shapes and undulating lines.

The interior incorporates a pattern of squares with a unifying arc said to symbolize the academy’s global charter. In the center of the space, an immense red cube, which extends from the floor to the ceiling, is intended to symbolize the heart of Matrix education.

In the retail area, a space visible from the street through massive storefront windows, the complete offering of Matrix products sits on white shelves and pops nicely against a stark white wall.

The building also mirrors the community in which it was built, noted Gary Glossman, the academy’s creative director, adding that the company chose the area for its warmth and neighborhood feel.

The academy is the first in a series of initiatives that Matrix will unveil over the next year to entrench its leadership position. Another equally significant element in its strategy involves leveraging what the company calls its “power brands,” namely Amplify, Sleek Look, Curl Life, and Biolage.

The company recently revamped both Amplify, a collection of volumizing hair care products, and Sleek Look, a hair smoothing line, giving them a more upscale look that is debuting in salons now. The changes will allow Matrix, and for that matter, salon owners, to organize each collection by color, designating aqua packaging for Amplify, orange for Sleek Look and green for Curl Life.

Biolage, known for its white bottle accented with a single green leaf, also will get refreshed this spring. Rather than a complete overhaul, Matrix will simply tweak elements of the design to make it easier for stylists to identify individual products and consumers to shop the line.

For instance, the brand’s different product categories will be color-coded. “The 15-year-old brand has a huge connection with hairdressers and consumers, so there were certain elements [of the packaging] we didn’t want to tamper with, but we did want to modernize it without compromising the equities,” said Sklar.

Matrix will kick off 2005 with its biggest product innovation for the year: the introduction of Color Smart Protective Luminating System, a five stockkeeping-unit collection of color-protectant products.

Color Smart, which the company expects will grow over time to reach eight to 10 sku’s, is positioned to tap into the fastest-growing segment in the industry. Professional hair color is increasing at a rate of 6.5 percent, close to three times the rate of industry growth. According to Matrix, nearly 60 percent of women color their hair. And while they may spend anywhere from $30 to $300 in the process, only 25 percent use products formulated to protect color. Industry sources estimate Matrix will spend $1 million to $2 million in marketing to support the launch of Color Smart, which could potentially grow into a $25 million brand.

Color Smart, the fourth in Matrix’s “looks” series, will create a unified cohesive look in the salon, commented Sklar. “We now have a unifying silhouette to our packaging,” he added.

Several other formidable salon brands are aggressively going after this same segment.

Goldwell debuted its color-enhancing collection, Color Glow, last spring. The company expects the Color Glow regimen, which ranges in price from a $10 shampoo to a $15 styling product, to generate $10.5 million in sales in the first year. A new player called Colortech also is working to make inroads in the salon channel with the launch of a collection for color-treated hair. Colortech, with premium price points in the $20 range, is a seven-item line of shampoos and conditioners that utilize color-retention technology similar to the kind used in long-wearing lipstick. Colortech will follow its debut with styling products.

Matrix aims to separate itself from its competition by closely tying the brand to the entertainment industry, and infusing celebrity into its marketing efforts. Earlier this year, Matrix began running a series of advertorials in Us Weekly called “An Award Winning Look.” The ads detail what Matrix products were used to create the celebrity’s red-carpet hairstyle. For example, a September Matrix advertorial showed how Marco Guglielmino, a Matrix Design Team member and editorial and fashion stylist, styled Hilary Duff’s blonde locks for the MTV Video Music Awards, which took place in Miami Sept. 29. The ads are being done quarterly with an award show tie-in.

“These efforts drive traffic to the salon,” said Sklar.

Over the last 12 months — about the same time it took to complete construction on the academy — “the Matrix team has really catapulted the brand to the next level,” said Sklar.