Investors, including L Catterton, have been drawn into the space.

Aging hair is getting a makeover.

The historically unsexy category has a handful of new entrants, like Nutrafol and Better Not Younger, that aim to tackle issues like hair loss, texture shifts from hormonal changes and overall hair well-being.

According to Euromonitor, the over-the-counter hair-loss treatment market globally reached more than $900 million in 2018. In the U.S., the market was $126.4 million. Mintel’s data shows that a significant percentage of adults — 44 percent — have taken appearance-oriented supplements, according to Olivia Guinaugh, U.S. home and personal-care analyst.

“Hair loss is the biggest concern consumers have,” Guinaugh said, noting that graying hair also appeared as a concern. She has seen nutritional supplements that target hair enter the space, and said it underscores the overall wellness trends. “That beauty-from-within trend, that’s really impacting the hair-care market,” Guinaugh said.

Unsurprisingly, money has found its way into the space. 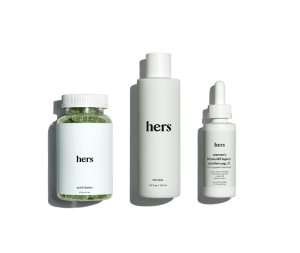 Nutrafol, a hair supplements and wellness business, raised a $35 million Series B led by L Catterton’s Growth Fund earlier this week. Unilever Ventures, an existing investor, also participated. Virtue Labs has raised around $45 million for its hair wellness line, according to founder and chief executive officer Melisse Shaban, and has hair-loss products in the works. Hims and Hers, the millennial telemedicine business that has a hair offering that spans minimalist shampoo to Minoxidil, a hair regrowth product, has raised $197 million from investors. Hers is expanding its hair assortment in mid April, according to brand lead Hilary Coles.

“[In] the hair-loss category there hasn’t been any innovation for decades,” said Giorgos Tsetis, ceo of Nutrafol. The company’s supplements and topical products are meant to combat hair aging and loss without the traditional ingredients (like Minoxidil).

And while Nutrafol does have products meant to treat hair loss in men and women, the audience has ended up being a broader one, Tsetis said. “Our customer is somebody that is aware of their health and their wellness, that cares for what she or he takes on a daily basis to really feel great. It’s not necessarily…somebody that’s looking for a quick fix,” he said.

So far, Nutrafol’s customers skew younger in men, and older in women, he said — which led to the development and spring 2019 launch of Nutrafol Core Plus, a supplement for women over 40. “The audience with the highest lifetime value is the women who are skewing a little older,” he said, and Nutrafol Core Plus is off to a strong start. “A big part of our audience skews toward post-menopausal product.”

That audience is the same one targeted by Better Not Younger, a brand launched by the former Pantene global president Sonsoles Gonzalez in March. Gonzalez noticed a shift in her own hair in her 40s, and felt that hair companies simply weren’t making products targeted at that segment.

“All of our briefs were women 18 to 44,” Gonzalez said. “I always joked about it — ‘what happens to these women after 44? They disappear?’ Then all the sudden it wasn’t funny, it was me.” 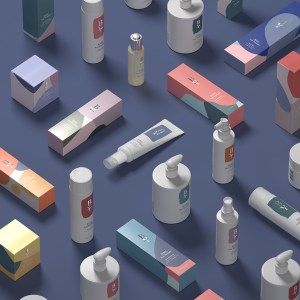 Better Not Younger aims to tackle the hair needs of women over 40.

With Better Not Younger, Gonzalez has released a line that targets texture and color needs, and includes nutritional supplements. “Overall what we’re trying to do is address the root causes of aging hair, but also trying to reduce the signs — the things you see every day,” Gonzalez said.

For example, Better Not Younger has a Silver Lining Purple Butter Masque, $34, that aims to eliminate brassiness or yellowing that can be found in gray hair, similar to purple shampoo for blondes. The line’s shampoo and conditioner combinations are aimed at volume and repair, and a scalp cleanser with silicone comb application tip aims to break up scalp buildup and gently exfoliate.

“There are two main reasons why your hair is messed up at this age,” Gonzalez said. “One is the hormonal changes which affect the growth cycle of the hair, and you’re producing a lot less sebum so it’s drying. And you’re coloring every three weeks, [and] using heat and styling products, so you have a perfect storm and in the moment where your hair is weaker and more vulnerable is when you start doing even more things to your hair.”

Today’s aging hair and hair-loss products are designed to be more beautiful, according to Coles. “Most hair-loss products currently on the market feature jarring colors and have off-putting smells, too,” she said. But Hers aims for its products to have pleasing textures, smells and “beautiful packaging,” she noted.

Attitudes around the category are shifting, too, according to Virtue’s Shaban. Her product line centers around alpha keratin 60ku, a patented form of human keratin developed for regenerative medicine purposes. 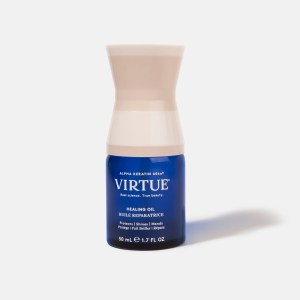 “Women today are like, ‘let’s lay it on the table, that’s the only way to get a solution,'” Shaban said. Virtue has a hair-loss line that’s been in development for a couple of years that is slated to launch in the first quarter of 2020, Shaban said.

That shifting attitude, along with growth in prestige hair broadly and repurchase rates for products like shampoo, have gotten investors more interested, she said.

Hair is Now the Fastest-Growing Category in Prestige Beauty

Hair Care Gets Into Wellness