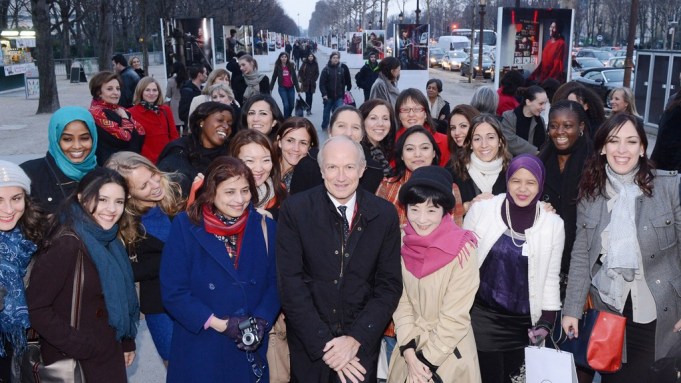 PARIS — The Sorbonne University’s mythic Great Amphitheater — in which Marie Curie gave her inaugural physics lecture on Nov. 5, 1906, as the institution’s first female professor — served as the impressive stage for the 15th anniversary awards ceremony for the L’Oréal-UNESCO For Women in Science program held here on March 28.

This year’s laureates, five female scientists hailing from five different geographical regions, were recognized for their exceptionally original approaches to fundamental research in the physical sciences across a range of disciplines, including climate change, energy, the cosmos and health. Francisca Nneka Okeke, of Africa and the Arab States; Pratibha L. Gai, of Europe; Reiko Kuroda, of the Asia-Pacific region; Marcia Barbosa, of Latin America, and Deborah S. Jin, of North America will each receive $100,000 to support their area of scientific research.

As a retrospective tribute marking For Women in Science’s 15th anniversary milestone, giant photo portraits of the program’s 77 laureates past and present, including two female scientists who went on to become Nobel Prize winners — Elizabeth Blackburn and Ada Yonath — line Paris’ Avenue des Champs-Elysées through April 14.

Addressing the audience at the awards ceremony, Jean-Paul Agon, chairman and chief executive officer of L’Oréal, said: “This 15th anniversary marks the beginning of a new [momentum]. There is so much more to do … notably, we need to get young people passionate about science … to cultivate the Marie Curies of tomorrow.”

He presented For Women in Science’s first TV campaign, released in France and online in tandem with the event, whose storyline is about a group of little girls, each of whom grows up to become a scientist.

A short film made for and shown at the event profiled Australian evolutionary biologist Devi Stuart-Fox, the recipient of the program’s 2013 Special Fellowship in the Footsteps of Marie Curie award, who researches the role that colors play in animal communication.

“I hope that my research gives a better understanding of evolutionary processes and how animals communicate and see the world, but research on color-changing animals could also provide a natural model for the development of color-changing materials,” she said.

Gai, who explained she spends her days studying “these tiny creatures called atoms that are so small it’s like looking at a moving golf ball on the surface of the moon from the earth,” shared the story of modifying her electron microscope — a hugely risky financial endeavor — in order to better observe chemical reactions occurring on surface atoms of catalysts to help further advances in medicine or energy sources. Gai encouraged the program’s fellows and young scientists in the audience to: “Please follow your curiosity.”

“When you’re trying to understand something, you have this mixture of tension and excitement,” she purred. “You go one way, you go another way … and finally — there! Ladies and gentlemen, this moment is an orgasm.”

The ceremony formed the culmination of a three-day program of events, including a dinner-debate in which past and present laureates participated. Topics included challenges faced by women in science and what can be done to accelerate the pace of change. Najat Vallaud-Belkacem, French Minister of Women’s Rights, also spoke at the dinner, calling for a changing of “the rules of the game” in society to promote equality and diversity in all areas of responsibility and decision-making.

Speaking at a press conference on the morning of the awards ceremony, held in UNESCO’s Paris headquarters, Agon spoke of the “huge network” of women scientists flourishing under the program in which L’Oréal has invested more than 80 million euros, or $102.4 million at current exchange. Already 1,729 women scientists from more than 100 countries have benefitted from it.

“Over the next few decades, it is going to change for real the place of women in science,” predicted Agon, who in April 2012 was appointed president of the L’Oréal Foundation, created in 2007 to fund the For Women in Science program as well as other activities, succeeding Lindsay Owen-Jones, L’Oréal’s former ceo and outgoing honorary chairman.

When asked about his views on laws pertaining to equality in the boardroom, Agon mused on the subject by laying out some facts about the “natural movement” of women into top positions at L’Oréal.“The percentage of women at high management level is increasing every year and very soon will be 50 percent. In our research department 40 percent to 50 percent of top-level positions are held by women, and I was talking yesterday with our human-resources department for research [which] confirmed that 80 percent of [recruits] today are women,” he said. “So, I’m absolutely sure that in a few years time the majority of top positions in this company will be held by women. Laws can help speed things along, but you don’t always need a law to make things change; things either change naturally or they change because you want them to change.”

The three-day For Women in Science program in Paris will be followed by 50 local ceremonies around the world throughout 2013.