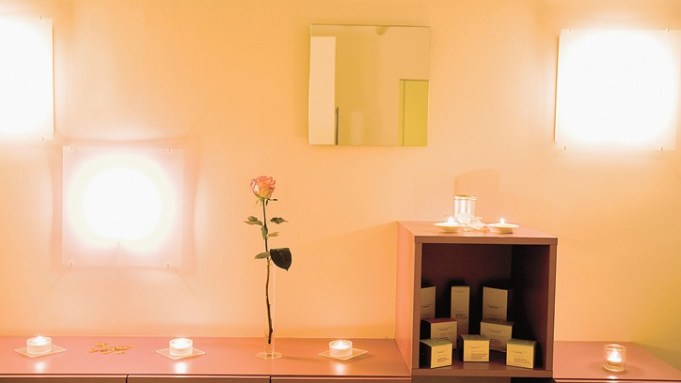 In most doctors’ offices, you’re lucky to find dog-eared magazines. But entering the Forever Laser Institut, a medical spa in Geneva, is akin to walking into a branch of the Gagosian Gallery. Works by some 40 artists, including Andy Warhol, Vanessa Beecroft and Tracey Emin, dapple the streamlined space.

That the surroundings are worlds away from most places giving aesthetic and topical dermatological treatments is just the point. Opened in 1997 and billed as the first “medi-spa” in Europe, the idea came to founder and dermatologist Luigi Polla from a spate of Sci-Fi movies.

“I was watching Dune, Blade Runner and 2001: A Space Odyssey, and thought, Wouldn’t it be beautiful to have a spa in a satellite somewhere far away, isolated from everything,” he reminiscences in his office, whose starkness hearkens back to the futurism depicted in those films. “Isolated from everything and just working, thinking beauty. Watching these movies, I got this abstract concept of beauty, out of the world and out of time.”

Indeed, beauty is the lifeblood of the entire Polla family, whose six members are involved in every aspect of its numerous businesses, which include an art gallery, an internationally distributed skin care line and the aforementioned spa.

Luigi’s wife, Barbara, for instance, wears many hats. In addition to being a doctor, writer, teacher and politician (she held a seat in the Swiss House of Representatives), she runs the Analix Forever Gallery, which she and her husband founded in 1991. “What I am good at is discovering talents,”  she says. “I want to contribute to the early development of an artist’s career.” This year, Barbara plans to show works by Helena Kovylina, Andrea Mastrovito, Ali Kazma and Kris Van Assche, the  men’s wear designer, among others.

Though they may not be household names at the moment, chances are they will be, if Barbara’s track record is any indication. She has discovered numerous rising art stars over the years, including  Beecroft, who is best known for her elaborately staged photographs of groups of women, sometimes dressed, sometimes not. She met the artist in 1993, when she came out of a disco in Milan at 2 a.m. “We started to talk, and what she had to say was very interesting,” says Barbara.

Her gallery was also the first outside of the U.K. to show the work of the celebrated young British artists Sarah Lucas and Tracey Emin, in a show called “From Army to Armani.” “They came in army clothes from London by train,” remembers Barbara. “The deal was that at the end of the show, we would bring them to Milan — because there was no Armani [store] in Geneva at that time — and get them both some Armani clothes.”

The Turner Prize-winning conceptual artist Martin Creed had his first solo exhibit abroad, in 1995, at Analix Forever. His work has had a huge influence on the Pollas, both in the Forever Laser Institut, which has two of his pieces, and in Alchimie Forever, the beauty product branch of the family franchise. In fact, “The Lights Going On and Off,” the work featuring a pair of flashing lights in an empty gallery that won him a Turner Prize in 2001, lends its name to the Lights On women’s day cream and the Lights Off night cream. Those products, copyrighted Martin Creed, were retailed for a time at the The Hayward Gallery’s gift shop in London and continue to be available in Alchimie Forever’s broader distribution.

Alchimie Forever is sold in more than 60 doors in the U.S., including spas, medi-spas, Henri Bendel; it recently appeared on QVC and on qvc.com. In France, its distribution includes some Sephora locations and various boutiques, most recently, the Saint Germain-based concept store called Arty Dandy. In both France and Switzerland, Alchimie Forever is sold in some 20 spas and boutiques. Sephora is also the brand’s retailer in Singapore.

Barbara Polla creates all of the line’s products, which are rich in antioxidants and feature blueberry as a signature ingredient.

As they say, the fruit doesn’t fall far from the tree. Alchimie Forever’s president is Barbara and Luigi’s daughter Ada Polla Tray, age 32, who is based in Washington, D.C. Nineteen-year-old Roxanne looks after the company’s Web site and boxes products when she’s not studying at Georgetown University. Rachel, 26, oversees distribution, including Europe, and Cyrille, age 28, aids her father at the institute on the Rue du Rhône.

The medi-spa in Geneva offers a wide variety of dermatological and aesthetic services for the face and body, including massages, facials, laser treatments and Botox and collagen injections. Recently, Luigi Polla has been focusing on using hyaluronic acid through fine canules, rather than traditionally shaped needles, which he says allows for a more even distribution of product and gives
a “soft lifting” effect.

“It works not only to improve wrinkles or lines but also to improve the beauty, the luminosity of skin,” he says of the process. Looking ahead, Luigi Polla believes stem cells and ultrasound could ultimately be used more widely. Overall, his goal is for patients to have a “natural” look and “the harmony of lines, of color, of volume.

“I believe you cannot create beauty if you are not constantly surrounded by beauty,” adds Polla. “It stimulates me to do my work.”