Thirteen years after catapulting Angel into the fragrance stratosphere, Thierry Mugler Parfums is set to launch a scent with otherworldly positioning. 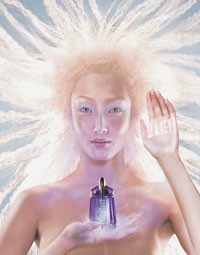 PARIS — Thirteen years after catapulting Angel into the fragrance stratosphere, Thierry Mugler Parfums is set to launch a scent with otherworldly positioning.

Alien — as the new juice for women is called — is due out globally, save for Spain and Portugal, in September.

Vera Strubi, president of Thierry Mugler Parfums Worldwide and head of Stella Cadente Parfums (both divisions of Groupe Clarins), described the Alien woman as “a kind of shaman, a type of enchantress. She is transmitting joy in the world. This woman has special power. You don’t know if she comes from the past or the future; she comes from elsewhere, which the name indicates.”

Strubi and Mugler — who was involved in each step of the project — began thinking up the new fragrance’s name five years ago. In keeping with the appellation of some other Mugler scents, the team wanted it to be five letters long and starting with “a,” like Angel.

“We thought something with five letters would bring luck,” said Strubi. “We thought Alien is a very Mugler word.”

The advertising also clearly has the stamp of Mugler, who chose and photographed the striking and otherworldly looking half-Korean, half-German model Tina Baltzer to star in the single- and double-page print ads. In them, she holds her hands up, with the Alien bottle. Between the two, mysterious rays pass, and Baltzer’s hair streams in undulating waves. Mugler also created the 30- and 45-second TV ads starring the model, which should break in some countries during the holidays.

For the scent, the Mugler team wanted a fragrance full of paradoxes. So International Flavors & Fragrances’ Dominique Ropion and Laurent Bruyere concocted a juice with white transparent amber notes, a woody note suffused with the proprietary Cashmeran and a jasmine sambac note.

“It is haute parfumerie fragrance,” said Strubi, who added that in the scent, she desired a mix of strange and familiar notes. “It is a fragrance that inspires happiness. The whole idea is to give energy, joy and mystery — but not on the dark side.”

Alien’s bottle was fashioned to resemble a faceted amethyst. It is purple with the scent’s name engraved in what looks like ancient typeface on the back. “It is a precious stone, full of symbolic spirit,” said Strubi. Gold touches on the flacon are reminiscent of bevels on jewelry. The scent’s outer packaging harkens back to that of Angel.

This story first appeared in the May 27, 2005 issue of WWD. Subscribe Today.

“We hope to make another classic,” said Strubi, referring to that scent that tops the fragrance charts worldwide, including France, where it is the perennial favorite.

While Mugler executives would not discuss first-year sales estimates for Alien, industry sources project the scent will generate at least $25 million in wholesale volume worldwide for the first 12 months on counter.

Roughly $3 million to $5 million of that wholesale volume could be done in the U.S., according to industry sources.

Benjamin Gillikin, president of the Clarins Fragrance Group in the U.S., declined to comment on the estimate. But he said the fragrance will be launched in the U.S. in a tight distribution network of about 100 specialty store doors of Neiman Marcus, Saks Fifth Avenue, Nordstrom and Bloomingdale’s. That’s fewer than the Mugler universe of 450 doors, he added, indicating that more doors will be gradually filled in, beginning early next year.

The promotional attack will be precise, consisting of scented strips in store catalogues and scented pieces mailed to consumers by individual doors. Gillikin said his goal is to “attract new consumers.”

“In terms of the concept, some will be shocked, while others will like it,” said Strubi. “I think we will find a new clientele.”

To help generate enthusiasm for Alien, an “Initiatic Space” has been opened in an old Thierry Mugler boutique on Paris’ Avenue Montaigne. The location, which will remain open until mid-October, is meant to be a showcase where press, sales staff and consumers can learn about the fragrance.