WWD traveled to Washington, D.C.'s upscale Dupont Circle to see what has been talked about for months — CVS' debut of Beauty 360. 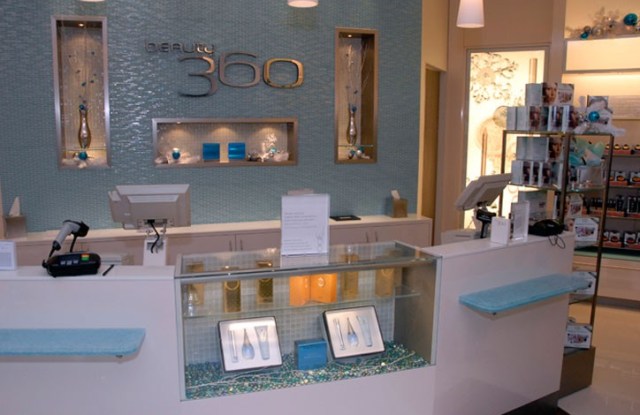 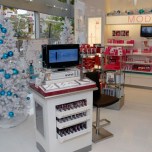 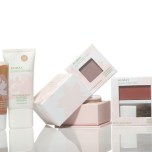 Women’s Wear Daily’s Molly Prior traveled to Washington, D.C.’s upscale Dupont Circle to see what has been talked about for months – CVS’ debut of Beauty 360.

CVS kept the brands under tight wraps for months and didn’t even reveal the exact location to the press. When the curtain was raised, it was worth the wait.

This particular store is one of the Beauty 360’s that is connected to an existing CVS. It is the first of some 500 slated to open over the next few years. The second will open next month in Mission Viejo, Calif.

Most striking is the physical appearance of the store with brushed steel accents and sea foam-colored glass tile. Although CVS stores have gone upscale in recent years, the look far surpasses traditional drugstores.

“I’ve seen the year-over-year growth that CVS has achieved on the mass side. For an indie brand like mine, to get four million in foot traffic is unheard of,” Borba told WWD’s Prior.

Some newer brands such as Canyon Ranch skin care and It Cosmetics are stocked. The fragrance wall is particularly dramatic and houses brands from P&G Prestige, Coty, Inc. and Clarins. As expected, the Beauty 360 units, each complete with a treatment room, also will offer beauty services such as manicures, express facials and makeup application.

The appearance of the store could very well convince more vendors the time is right to loosen up distribution models. No one can deny the people pulling power of CVS. The chain’s store count is about 6,800 units with ideal real estate locations across the country.

Heavy traffic aside, the store here will compete with other beauty powers such as a nearby Douglas and Bluemercury. In other markets, Beauty 360 will contend for consumers with the likes of Space NK, Sephora, Ulta and many independent beauty purveyors.

Will it work? Is it a bad or good time with the economy for CVS to venture into this new format? One thing is clear – win or lose CVS has proven it is in the beauty business for the long haul.

NEXT: People, Place and Things >>

A few words with Mike Bloom, CVS’ senior vice president of merchandising and Mary Lou Gardner, senior category manager beauty, as they show the world Beauty 360. Both instrumental in bringing Beauty 360 to fruition.

Bloom:  “We’ll perfect the model and make sure it performs before rolling it out aggressively. Nobody can replicate our real estate. We are convenient and that’s what the shopper wants.”

Gardner: “This model provides a convenient destination where women can feel good for a little bit of money….Our foot traffic doesn’t slow down due to the economy.”

NEXT: What’s In Store and Beauty By the Numbers >>

Libby Lu Closes: Libby Lu, one of the first beauty specialty stores for kids, is closing its doors. The company rode a wave of popularity in the late 1990s and early 2000’s when tweens controlled parents’ pursestrings.

Revlon On the Rebound: Revlon credits new products with an improving financial picture. One promising line is Pure Blends from Almay which is capitalizing on the natural trend.

Beauty By the Numbers:

Beiersdorf Sales Up 12.5% In 3Q
Beiersdorf AG managed to generate third-quarter profits and sales growth and maintain its optimistic outlook for the remainder of the year despite the difficult economy.

Revlon Reports $29M Profit
After two years of heavy lifting and light product introductions, Revlon Inc. has cranked up the pipeline for the coming year with a spate of launches aimed at sharpening its competitiveness.

Physicians Formula Profits Leap
Third-quarter profits at Physicians Formula Holdings Inc. grew to $1.7 million, or 12 cents a diluted share, from $102,000, or a penny a share, in the same period a year ago because of tax benefits and a shift in timing of inventory returns.

Henkel Beauty Flat
The beauty division of Henkel AG & Co. KGaA turned in a flat third quarter in the face of a challenging market.

This Week In Beauty appears on WWD.com every Friday.