The pillar launches with two fragrances, including the first male fragrance from the brand.

The company, which revived its fragrance business in 2017, is launching a new fragrance pillar. Called Tiffany & Love, the pillar makes its U.S. debut on Oct. 1 with two fragrances, including the brand’s first male fragrance. Tinted with variations of the Tiffany’s signature robin egg blue, the bottles were designed by Reed Krakoff, marking the chief artistic officer’s first full fragrance project for the brand.

“It’s part of a longer-term strategy to build a portfolio of fragrances to create a destination for fragrance at Tiffany’s,” said Krakoff. “It’s for the consumers that love Tiffany and come to Tiffany, but also consumers that are purchasing Tiffany for the first time.”

“Tiffany’s is recognized worldwide to be the authority of celebration, in particular of celebrating love,” said Simona Cattaneo, chief marketing officer of Coty Inc.’s luxury division. “What was important was the strong idea of celebrating love, relationship and commitment in a new way, following a modern expression of love and a different type of love in the world of today. It’s the love that brings people together, it’s about inclusiveness, it’s about acceptance of all forms of love.” 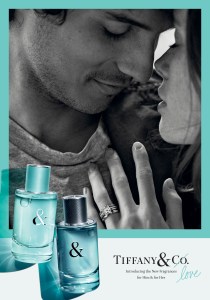 A look at the new Tiffany & Love campaign.  Courtesy Image

Tiffany & Love will launch in the U.S. at 34 Bloomingdale’s doors, followed by a global rollout to more than 20 markets, including the U.K., Russia, Germany, Italy, China and Australia. Neither Krakoff nor Cattaneo agreed to offer sales projections, but industry sources estimate the Tiffany & Love fragrance pillar could bring in as much as $84 million globally in its first year at retail.

Both fragrances in the pillar share a common ingredient: blue sequoia. Tiffany & Love for Her features top notes of blue basil, an ingredient that was developed exclusively for Tiffany, and grapefruit. Tiffany & Love for Him blends the wood-infused base with ginger, mandarin and cardamom. The scents were developed by Honorine Blanc and Marie Salamagne of Firmenich and Sophie Labbé and Nicolas Beaulieu of International Flavors & Fragrances, respectively.

“When we look at the audience, we know a little bit about the kind of person, virtually somebody who is expressive and values relationships, family and friends, somebody who has a strong sense of style, who is authentically unique,” she said. “It’s somebody that is probably interested in art, music, culture. For sure, it’s somebody that is contemporary because of this inclusiveness and sense of community. I’m sure it will engage with Millennials, with inclusiveness and freedom and authenticity [as] part of the campaign.”

“Tiffany is a brand that puts a lot of emphasis on authenticity in relationships, in product, in the consumer experience,” he said. “The idea was to capture [real couples] in more personal moments, the in-between moments and not necessarily the classic fragrance moment. It’s really about this personal sense of love and two people coming together as opposed to a grand gesture. It speaks to an intimacy and the uniqueness of each relationship.”

Tiffany & Co. will launch digital and social activations in support of the launch, with a primary focus on YouTube, Instagram, Facebook, Spotify and WeChat. The official campaign hashtag is #LoveYourWay, with influencer activations to come.

Nail Art Is a Thing Again, Thanks to NYFW