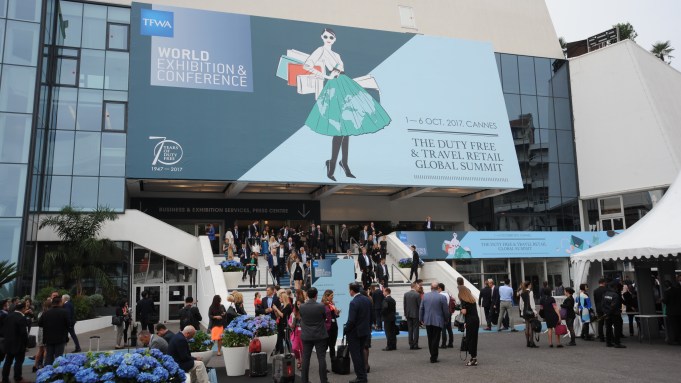 “The picture has picked up,” said Erik Juul-Mortensen, president of the Tax Free World Association, during the opening talk at the annual convention here.

He noted that the 2.7 percent year-over-year sales decline for the overall activity in 2015 reversed to a 2.4 percent gain in 2016, to $63.5 billion. Of that, fragrance and cosmetics made up the lion’s share, generating $21.59 billion, a 9.2 percent increase, according to Generation Research.

That upward trend has continued into this year, when first-quarter revenues advanced 4.2 percent to $17.7 billion.

But the percentage of people buying in airports remains exceedingly low, at about 15 percent, despite the strong sales; increased passenger footfall (up 6.7 percent on-year, IATA said), including an ever-expanding number of Chinese travelers, and the momentum of makeup in general, and lipstick in particular. Further, geopolitical and economic tensions, especially with Korea and Brexit, combined with the rise of digital, rife competition and mounting costs have heightened hurdles.

“The world is more unpredictable,” said Juul-Mortensen. “Tourism in key areas has been wiped out by terrorists. We see how vulnerable our industry is.”

Still, many beauty players expect to register solid growth in travel retail in 2017 and 2018.

“Luxury was up 5 percent in the second quarter, and travel retail is one of the drivers,” said Camillo Pane, chief executive officer of Coty Inc. “While last year was not so great, we are seeing a turnaround, and it gives me great confidence.”

Inter Parfums SA, meanwhile, is posting a 12 to 13 percent gain in the channel, according to company president and ceo Philippe Benacin, who predicted the trend will continue next year.

Geographically, the Asia-Pacific region was the growth engine, notching an 8.2 percent gain. Many executives cited Asia — specifically China — as the biggest catalyst.

“The Chinese shoppers are flying everywhere. They’re not the only ones, but they are the most important in the growth of our industry lately,” said Vincent Boinay, managing director of travel retail worldwide at L’Oréal.

“In the next five years, the number of Chinese travelers will increase by 100 percent. This is a huge opportunity,” said Eric Henry, chief business officer of the Europe, Middle East and Africa region at Shiseido.

Olivier Dubos, senior vice president, worldwide travel retail at Parfums Christian Dior, noted that less than 10 percent of the Chinese have passports today. “We have to be ready to face this tremendous opportunity and understand the type of service and brand expression they are looking for,” he said.

Regarding products appealing most to Chinese travelers, Dubos said people want what they’re seeing in social media and advertisements, but often expand their purview once in store. “They want what the [key opinion leaders] have,” he said, adding it’s key to engage Chinese travelers before they set off on a trip. To that end, Dior has been working with Ctrip, China’s number-one online travel agency.

Elizabeth Arden, too, is focused on the presell and upgrading the overall experience, especially in markets where the Chinese are traveling. “Japan is key to winning. Thailand is the number-one destination of Chinese people,” said Stéphane Bonnet, general manager of global travel retail at Elizabeth Arden, whose business in the channel is growing by double digits and is in about 1,300 doors there.

Asia also presents challenges, most notably in South Korea, where tourists levels have fallen, particularly among Chinese visitors, due to tensions over the THAAD missile defense system and the ongoing missile and nuclear tests carried out by North Korea over the past few months.

“Korea at the moment is suffering,” said Edgar Huber, president of Coty Luxury.

“It’s a very complicated situation,” agreed Jougelet, adding airport operators are forecasting sales there to plummet by double digits next year. She noted Chinese travelers are opting to go to the U.K., thanks to the weak pound, while in Asia, top destinations are Vietnam, Hong Kong, Thailand, Japan, Indonesia and Myanmar.

“You may lose [business] in one place, but you gain it in another,” said Huber.

While the travel-retail activity started percolating again last year in Europe, where global shoppers are rising, the expected impact of Brexit clouds the horizon. “Brexit will post a challenge to the overall business,” Henry said.

While he doesn’t anticipate sales in London will suffer greatly — due primarily to the likely continued influx of travelers — Henry expects business in local markets outside of the U.K. capital to decline.

“Millennials explain part of the makeup boom worldwide in travel retail — they are one of the key reasons,” said Boinay.

Mangan said there’s a need for exciting makeup experiences. “We are introducing more play in color,” he explained.

Shiseido, which will in the second half of next year relaunch its color-cosmetics line skewed toward Millennials, is working to push its makeup collections to the front of its counters in the channel. “We just opened the ‘social counter,’ which is playful and interactive,” said Jougelet.

“If travel retail is going to grow organically, you need to increase penetration, and this will be done by those who surprise the consumer with differentiation, excitement and convenience. We are looking at how to innovate with a radical approach,” said Javier Bach, chief operating officer at Puig.

To that end, the company created an interactive, immersive Jean Paul Gaultier animation, called Gaultier Airlines. The in-store unit was designed to resemble a vintage airline interior, replete with differentiated products, a merchandising unit looking like a food-and-beverage cart, a gaming component and even fragrance blotters in the form of boarding passes.

“The speed of change in travel retail is superslow — it takes ages — so we are trying to innovate and change the rules to attract consumers,” said Bach.

The Estée Lauder Cos. Inc. is injecting a dose of fresh thinking into its strategy as well. “As an industry we are somewhat complacent, thinking we are sitting on a growing industry. That was fine until 10 years ago, but today the number of traditional sources of revenue for the airports are declining and the airports have a challenge,” said Olivier Bottrie, president, travel retail worldwide at Lauder. “The entire industry needs to rethink the model.”

He posits that airports must be open to a new cost-sharing structure that will improve profit margins.

“If airports don’t think differently, they’re going to lose,” he said, noting the demise of businesses that once seemed impregnable, only to lose out to digital newcomers. “Just look at Blockbuster and Netflix. It doesn’t mean doom and gloom. It just means we need to be on our toes and act.”

Continued Cédric Prouvé, group president of international at Lauder: “There is tension because retailers are pretty risk-averse, so they bank on brands with a proven record. But the consumer wants to be surprised.” He added travel retail is “a great window on the world to build brand equity with new consumers.”

With a high “wow” quotient was Chanel’s Beauty Box, a 220-square-foot kiosk presenting primarily lipstick, which debuted in Rome’s airport, at the entrance of the terminal. It was created to help attract new consumers and up what Jean-Guillaume Trouvin, managing director of export, termed the “stop ratio.”

“We let Chanel surprise you,” he said, adding that makeup and skin-care sales doubled at the location, where historically perfume had generated most of the business. “We need this engagement with the client.”

Another trend is the launch of hair care, with brands like L’Oréal’s Kérastase now in the channel, as well as select masstige brands. While some companies laud the diversified offering as a way to attract Millennials and emerging middle-class travelers, others fear the effects of cannibalization. Dior’s Dubos called the increase of choice and categories “dilutive” to the prestige business, saying that the time a customer takes to purchase a $10 bottle of shampoo is time away from a luxury purchase.

“It’s not just products but experiences, too, that are competing for shoppers’ attention, from ever more appealing bars and restaurants to even swimming pools. Before, it was only duty-free and shopping,” he said. “Now you can do anything, so you have to have a memorable experience that gives shoppers a sense of place and is interesting.”

At Singapore airport, for example, the brand brought in a pink convertible for Miss Dior — perfect for selfie moments — while in Hong Kong, Dior partnered with DFS for a Rouge Dior lipstick happening. “It had everything that a megaevent would have: makeup artists, social sharing, virtual reality headsets, a makeup look created just for the event and a launch event for KOLs, who posted on social,” said Dubos, adding lines snaked down the corridor during the animation.

At the TFWA session, there was a call for retailers to keep an eye on product pricing. “The operators need to [sell] at a price that makes them competitive with the local market,” said Philippe d’Ornano, president of Sisley, noting more and more are instead increasing the selling price of products.

The pressure on prices and margins, plus the wide range of products carried in travel retail, are among the factors causing Euroitalia executives to reevaluate the channel. “It seems to me that you have a lot of confusion all around,” said Giovanni Sgariboldi, president of Euroitalia.

There was also a plea for airports and operators not to overbid “to give us a chance to invest,” said Laurent Marteau, head of travel retail worldwide at La Prairie Group. “They need to leave us a bit of room to be able to invest into staffing, to be able to do more retail sales, which will provide them more cash.”

Data sharing was another point of contention. The operators have so much data about the shopper — who they are, where they’re flying to, on what airlines. “We have the opportunity to mine this,” said Huber. “Retailers are always protective, but by sharing, we can increase conversion and have unlimited opportunity.”

“The more we understand the specificities of the travelers, the easier it is to bring customized, differentiated offerings,” said Luis Miguel Gonzalez Sebastiani, managing director of Bulgari’s fragrance unit. “If your airport is 40 percent Chinese and 30 percent Middle Eastern and I know I have such and such a launch, we can work together.”

For example, for the introduction of Goldea The Roman Night in the U.K., Gonzalez Sebastiani said Bulgari capitalized on data from World Duty Free to inform the launch strategy and consequently reverted a negative sales trend into an increase.

At the trade show, beauty executives said they are focusing on how they inject service into the travel-retail experience. “In the past, we heard that you have no time in airports, you can’t really deliver service [there],” said La Prairie Group’s president Patrick Rasquinet, adding that’s simply not true.

Granted, with the solid sales increases that travel retail is posting today, some question the need for change. Stay stagnant at your own peril, though, warned David Rowan, editor at large of Wired U.K., who spoke during TFWA’s opening conference. “What was once just a crazy, wacky idea is soon going to be a product,” he said, citing flying cars (or “vertical takeoff jets,” as they’re called in the industry) as one example. (He gave the Volocopter as an example that is set to come to market next year.)

“We are in a world of exponentials, where things start slowly and expand exponentially. Think of Airbnb, solar energy, artificial intelligence,” Rowan continued. “The growth curve is no longer linear. It is exponential.”