In 2019, fragrances and cosmetics rang up about $38 billion in the channel that has been buffeted on all sides during the coronavirus pandemic.

By Jennifer Weil
with contributions from Tiffany Ap, Sandra Salibian
on October 2, 2020

Of all the channels hard hit by the coronavirus pandemic, travel retail is by far at the top. Just one year ago, beauty sales in that channel were up 30 percent and the mood as retailers, brands and airport operators gathered at the annual Tax Free World Association trade show in Cannes, France, was buoyant.

Like so many others, that event, which was originally scheduled to be held this week, will instead take place virtually, in early December, with a focus on China, not surprising given that the channel’s strength has long been the exponential rise in the number of voyagers around the globe — especially from China.

But as the world remains grounded, what are airport operators and makers of beauty products, travel retail’s best-selling category, to do today to help recoup sales, despite ongoing and ever-fluctuating travel restrictions in most parts of the world?

How soon is the business, which can constitute up to one-quarter of a major multinational’s sales, anticipated to bounce back to pre-COVID-19 levels?

“What we expect until the end of the year is somewhere between a minus 60 percent and minus 70 percent drop from the 2019 levels,” said Dirk Mettlen, chief operating officer at Generation Research, which tracks the duty-free and travel-retail markets.

In 2019, travel retail was still on a steep growth trajectory. It generated sales of approximately $38 billion, up about 20 percent on-year, according to estimates by Generation, whose “Perfumes and Cosmetics” panel has input from close to 200 brands making up more than 80 percent of the travel-retail and duty-free market.

For the beauty segment, the Asia-Pacific region notched the biggest sales volume and increase, at $27 billion, up more than 30 percent. That was followed by Europe, with sales flat at $5 billion to $6 billion; the Americas, at $3.1 billion, with a mid-single-digit decline, and the Africa and Middle East zone, at $1.6 billion, with a low single-digit rise.

Mettlen said travel retail posted a good first two months of 2020, leading to a flat-to-slightly-growing result in the first quarter, then a sharp drop in the second quarter, when revenues plummeted by 90 percent to 95 percent.

“The third quarter was not much better,” he continued. “There is some hope that in the last quarter of this year there will be rebounding.”

Mettlen said there seems to be a common hope that the travel-retail business will return to 2019 levels by 2023.

“It should be a bit faster in Asia-Pacific than the rest of the world,” he said.

“If you look at a map, you see the only green blinking spot is domestic China for travel,” said Jerôme Goldberg, retail and travel retail customer success manager at ForwardKeys travel analytics company.

So today duty-free retailers and beauty brands alike are homing in on China, which was the first country to be hit by COVID-19 and also one of the first to reopen, although its denizens still can only travel domestically.

Specifically, executives’ eyes are focused on Sanya, the southernmost city on Hainan Island, for Golden Week. A record sales surge is expected for travel-retail operators in what’s called the “Hawaii of China,” as the country’s shoppers turn to local destinations while international trips remain on pause.

This year’s weeklong National Day holiday, taking place from Oct. 1 to 8, overlaps with the Mid-Autumn Festival on Oct. 1. In the run-up, not only were domestic flight bookings up 10 percent from last year, equating to more than 15 million flights, but according to online travel agency Qunar, Hainan is currently the most reserved holiday destination in China.

On June 1, the Chinese government announced it would more than triple the per-person duty-free shopping allowance from 30,000 renminbi to 100,000 renminbi, or $4,400 to $14,655, to help boost domestic spending, although the implementation date has not yet been set.

(Pre-COVID-19, more than 50 percent of the Chinese travelers’ beauty purchases were made outside of China, according to estimates.)

In August, duty-free spending on Hainan Island had jumped 221.9 percent on-year to 5.58 billion renminbi, according to China Customs.

CDF said at the start of September it would expand its footprint in Sanya, accelerating a joint-venture to open shops inside Sanya’s international airport to keep up with new demand.

Many others are jostling alongside the six duty-free players in the country to get a slice of the action — Bailian Group, Wuhan Department Store Group, Dashang, Eurasian Group, Nanning Department Store, Bubugao, Zhongbai Group, Hunan Friendship & Apollo Commercial, and Guangdong Highsun Group all have said that they have applied to obtain duty-free licenses there.

“The extraordinary increase of what the Chinese are buying within their local duty-free travel is mitigating the lack of the very limited international travel,” Freda told financial analysts. “But then, you can expect for long term, when the international travel will be reinstated, this local internal travel will not go away. So there will be a stronger and even more exciting long-term, travel-retail market to manage in which we are, today, the market leader. There is a lot of long-term potential to that.”

China’s domestic duty-free market is expected to reach 150 billion renminbi by 2025, according to research from CSC Financial.

Meanwhile, elsewhere, travel is picking up at more of a snail’s pace.

Governments’ inability to unify their decisions and clarify discourses concerning travel is heavily impacting the recovery and is not reassuring people, said ForwardKeys’ Goldberg.

“Countries are opening up or closing from one day to the other,” he said.

This summer ForwardKeys noted an uptick in reservations for some domestic travel, but not for long-haul flights. And in a domino effect, wherever there is a swell of new COVID-19 infections, travel — and therefore travel-retail sales — slow down again.

There have been some surprises throughout the pandemic.

“During the lockdown we thought that a traveler will be affected by the crisis, and when they would be back in the airport they would maybe be afraid of entering a shop and shop as they used to do before the crisis,” said Lagardère’s Vignau. “Actually, what we see today is that we are facing a massive decrease in terms of passengers, but people that are traveling, taking planes, they shop as they used to.”

He said that the stop ratios, or number of travelers entering the stores, is pretty high.

“Most of the commercial KPIs are higher than they used to be before the crisis,” continued Vignau, explaining there two main problems persist. First is that there are no longer international travelers — the top spenders — anymore.

In Europe this summer, for instance, the international traffic dropped by 80 percent versus 2019. “So it’s massive, and then that has impact in terms of the mix,” said Vignau. “Because those passengers, they buy souvenirs, they buy luxury goods. Those categories are deeply affected because of the lack of those consumers.

“But when you look at, for example, in Europe the Schengen passengers, they consume roughly the same way they used to before the crisis,” he said.

It’s key today to ensure travelers and staff that they can be safe in-store, said Vignau, adding two-thirds of Lagardère’s shops are open today.

“The second thing that we have been focusing  since the reopening is reinforcing the promise of duty-free, which is getting the best price,” he said. “We believe that in this moment, where it is not just a sanitary crisis but it is also in a way an economic crisis, it’s important to reinforce the fact that duty-free should be an attractive offer.”

Lagardère developed a program, now rolled out globally, called Get the Bestsellers at the Best Prices. The operator chose 1,000 products from the core business, and it guarantees that their price is the best that can be found in the market.

“We also changed the way we lay out our stores,” he continued. “There has been a new way of merchandising those products to make sure that the passengers will see them and that the prices we are offering are competitive.

“We see a really strong impact on this program,” said Vignau.

He said there had been concern that passengers might be afraid to interact with staff once travel-retail stores reopened, but “the relation with the passengers is still the same — they are looking for advice, for people to take care of them — that is not changing.”

In-store digital tools are becoming more important during the pandemic, too. The operator has been developing a virtual makeup station, for instance.

“We are testing quite a few things try to reduce the contact,” he said, adding seamless payment is one.

Also unexpectedly, a reserve-and-collect program, whereby travelers can make their purchases online before arriving in the airport, where they’d then pick up the products, hasn’t been that popular for Lagardère. That’s due in part to logistics: Flights are constantly being changed around, in terms of terminals or cancellations, making the pickup tricky.

“We do not see a massive shift to online,” said Vignau.

Still, Markus Stauss, vice president global marketing travel retail at Coty Inc., noted: “Millennials were the first group to travel again, and they are increasingly using ‘click and collect,’ picking up products at the airport.” 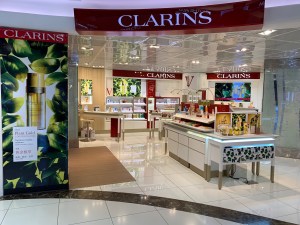 Clarins in DFS in Hawaii.  Courtesy of Groupe Clarins

Industry executives agree travelers are becoming ever more focused on sustainable products, mirroring the trend in the domestic market.

“We try to really adapt our set-up to catch as much as possible the traffic we have,” said Vignau.

In-store programs targeting specific demographics have also changed in line with the shift in passenger traffic. At Lagardère, fragrance is the beauty category recovering fastest.

“Optimize time spent in the duty-free shop through a more efficient but engaging shopping experience” will be increasingly central to “transform the shopping journey and finally drive travel retail visits and conversion,” she said.

“Operators and brands have to play in a much more flexible way,” said Goldberg.

Numerous indicators are positive. ForwardKeys noted that as soon as a country begins to reopen for travel, there is a rise in the number of air tickets sold for that destination.

M1nd-set found in a study carried out in June that 79 percent of the 2,500 international travelers it interviewed said they are willing to travel again within the first six moths once bans abroad are lifted. But they said most would cut back on the number of leisure and business trips.

“Party holidays and big city trips will be particularly reduced, whereas holidays in nature and small towns will be more frequent,” said Marchesini.

People will probably spend less time at airports versus the pre-COVID-19 era — presumably one to two hours less, 73 percent of respondents said.

Yet, 76 percent claimed they would still frequent duty-free stores. M1nd-set research highlighted beauty shoppers’ spend, for the most part, should remain the same, with just 38 percent predicting their outlay would be 10 percent to 20 percent less than before.

Airport travelers are a captive audience.

“There’s a natural flow of people,” said Christian Laurent, president of travel retail and export worldwide at Groupe Clarins. “It’s not like malls — you don’t have to go to a mall. We are very optimistic for travel retail, and consider it a channel of distribution that will stay strong.”

Executives believe most of the fundamentals are in place.

“What we are just lacking are passengers,” said Lagardère’s Vignau. “Once traffic will be back in our airports, our business will be flying again.”

• People traveling are not radically decreasing their outlay for beauty purchases.