For the past 20 years, Allure magazine has been benchmarking beauty for the consumer. Here, a look back. 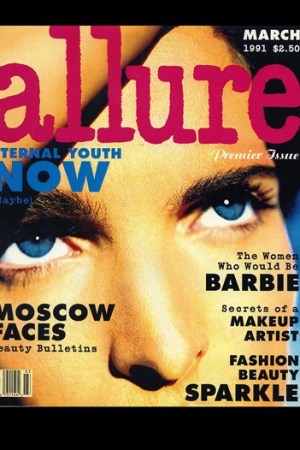 Fresh Doubles Down on Sustainability, Joins Union for Ethical Biotrade

March 1991
Allure, which is said to be the first magazine dedicated to beauty, is launched.

This story first appeared in the February 25, 2011 issue of WWD. Subscribe Today.

March 1991
Betty Friedan, author of “The Feminine Mystique,” authors an essay called “Can a Feminist Be Beautiful?” writing, “The better we are able to feel about ourselves as people, the more we are able to enjoy being a woman.”

September 1991
Allure reports on the computer retouching of photos — and the growing concern about the unrealistic images of women’s bodies it presents.

January 1992
At a time when Christie Brinkley was a standard of beauty, “The Allure Beauty Survey” asked men and women about the impact of beauty on their lives.

April 1992
The magazine reports on the practice of plastic surgeons performing surgery on their wives in “The Perfect Wife,” portraying patients as living advertisements.

September 1992
Kate Moss is featured in Allure, said to be her first American magazine appearance.

July 1994
Allure interviews a young woman diagnosed with melanoma and explores the dangers of tanning.

September 1994
The publication takes on the debate about “natural” cosmetics claims and challenges beauty companies about what the term really means.

January 1996
Allure is one of the first magazines to ask plastic surgeons to analyze Michael Jackson’s multiple facial changes.

July 1996
The magazine investigates heroin addiction in modeling, interviewing a former addict who helps expose what’s happening off the runway.

October 1996
With its “Best of Beauty” issue, Allure claims to be the first magazine to highlight its editors’ and readers’ favorite makeup, skin care and hair care products.

January 1998
Allure reports on the practice of the “off-label” injection of Botox.

May 1998
Gisele Bündchen is photographed for Allure by Mario Testino in what’s said to be the model’s first magazine cover.

February 2003
Allure reports on the potential dangers of a popular fat- and cellulite treatment called lipodissolve — comprising multiple shots of illegal PC, or phosphatidylcholine. The FDA issues an alert to restrict the smuggling of the substance into the country.

February 2005
Allure goes inside Donatella Versace’s boudoir, where hundreds of bottles of perfume are housed in a lighted display case and products are alphabetized by type and brand.

June 2005
Circulation of the publication reaches one million copies.

November 2005
The magazine speaks to the psychiatrist of a patient said to have undergone the first face-transplant surgery, in France, about the psychological ramifications of
the procedure.

January 2006
Allure reports on the use of clenbuterol in Hollywood. The illegal steroidlike compound, used on horses, is said to increase the risk of heart attack and stroke.

August 2006
The publication’s “Free Stuff” issue makes its debut; 16,130 beauty and fashion items are given away at allure.com that month.

October 2007
Allure claims to be the first magazine to report on the potential health dangers and excess formaldehyde levels of Brazilian hair-straightening treatments.

March 2011: Allure Turns 20
“The Allure Beauty Survey” explores the attitudes of men and women on looks — 93 percent of women said there’s more pressure than ever to care about how they look.