Perhaps as the first retailer to truly utilize masstige as the core of... 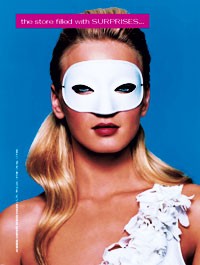 Perhaps as the first retailer to truly utilize masstige as the core of its merchandising strategy, the Chicago-based chain plans to add nearly 29 stores this year to its current base of approximately 150 units. Ulta will focus mainly on the northern California, South Florida and Midwest regions. Even more ambitiously, Ulta expects to grow its store count by 20 percent each year over the next five years.

And, beginning in March, two versions of a four-page insert will begin appearing in beauty magazines, such as Vogue, In Style and Allure, highlighting the retailer’s diversity of salon services, mass and prestige color cosmetics and prestige fragrances offerings in one store.

Nancy Altman, vice president of marketing for Ulta, said the ads look to reach Ulta’s target customer, who is in her mid-30s, is well educated and earns more than $50,000 a year. One insert features beauty images, such as a hand with colorful nails gripping an apple, and a woman bathing in a waterfall of prestige fragrance. The other is more beauty-oriented, showing images of a beautifully made-up face, perfectly painted matte red lips and a haircut.

Ulta runs about 17 inserts in newspapers and sends out 13 direct-mail pieces a year. Each follows market trends and is developed based on historical store sales trends. The next direct-mail book, to be launched in spring, will focus on prestige fragrances, just as apparel retailers highlight their spring clothing lines.

A blend of mass and class items — Ulta offers nearly 18,000 stockkeeping units — has been the formula that’s kept the privately held chain ticking. According to Joe Addante, vice president of finance, Ulta generated total revenue of nearly $500 million last year, up double digits from 2003. But because of this mix— and a block on selling leading prestige brands Estée Lauder, Lancôme and Clinique — some of its best-selling items don’t always reflect what is popular outside of Ulta doors.

For example, ID Bare Minerals, a makeup brand that is also sold on QVC, is Ulta’s leading prestige cosmetics brand, followed by Studio Gear, a makeup artist line with higher-end price points made exclusively for Ulta.

But, in line with beauty trends, StriVectin, the must-have antiwrinkle cream, is one of the store’s bestsellers. “We sell more StriVectin eye cream than any other retailer who sells the brand,” said Jeff Askenas, vice president of merchandising for Ulta.

Some more trendy makeup lines have recently been added to Ulta’s merchandise mix — stores average 10,000 square feet with a tally of approximately $600 to $750 per square foot — with the hopes to better meet the needs of its target shopper. They include Joey New York, LOLA, Sugar, Freeze 24/7, Vincent Longo and Amazing Cosmetics, a line positioned as a Hollywood makeup artist’s must-have brand. It is best known for its $40 concealer, formulated to cover under-eye circles, blemishes and rosacea. Sue Devitt Studio cosmetics is entering stores in March.

And unlike mass retailers, prestige bath is doing very well in Ulta stores, Askenas said, with brands such as Vitabath and Bare Escentuals leading the way. For 2005, Ulta will begin to decrease its mass bath mix to make room for higher-end brands. Korres, for example, will be added in time for Mother’s Day. Prestige bath sales, Askenas said, accounted for 35 percent of sales in 2004, up from 28 percent in 2003.

There are, however, similarities between Ulta’s success and the rest of the beauty retail world. For example, personal care appliances are one of Ulta’s hottest categories, especially higher-priced items that sell for between $70 and $140. To further drive sales of these products, Ulta has begun using in-store demonstrations, positioned in or near the store’s salon.

For 2005, Askenas expects hair accessories and cosmetics bags to be the year’s hottest categories.

“Departments stores abandoned [cosmetics bags] years ago so we have gone after [the category] and the customer is responding to it.”

There are similarities within mass cosmetics, too. After a soft launch, Rimmel’s low price points are finding an interested consumer. “Their national ads with Kate Moss are helping sales,” added Askenas. And like drugstores, such as Duane Reade, Ulta has found success with its private label cosmetics brand, Ulta. “It is very promotional. Business is up in the double digits,” said Askenas, adding that L’Oréal, Revlon and Maybelline sell best after Ulta. Askenas attributes Ulta’s success to the quirky shopping habits of consumers, as well as to Ulta’s service. “Retail has become so blurry. People will buy a 99 cent mascara or lipstick, a $50 fragrance and a $150 curling iron.”