George and Reena Hammer are taking a 360-degree approach to beauty and wellness, with retail, services, holistic treatments and a restaurant. No membership required.

The bar area upstairs at the new Urban Retreat.

LONDON — Urban Retreat is advancing on Knightsbridge with a debut stand-alone space at The White House, a former aristocrat’s mansion on Hans Crescent near Harrods.

The spa and beauty services brand founded by serial investor and entrepreneur George Hammer opened on the site in the early autumn after spending 17 years as a concession on the Fifth Floor of Harrods.

The incarnation of Urban Retreat caters to the body, the mind and — unusually for a wellness space — the palate, with a restaurant on the ground floor called Flavour that serves up healthy food, and has an all-day bar with drinks ranging from wellness shots to cocktails to organic wines.

The space spans 12,000 square feet over five floors, caters to men and women and is open to the public. Although it feels like a private club — or a boutique hotel — there are no dues or membership fees. Services range from hair and beauty — Frédéric Fekkai has opened an atelier on site, and will be selling his various products there — to tattooing, piercing and body art.

The medical and wellness proposition is major. 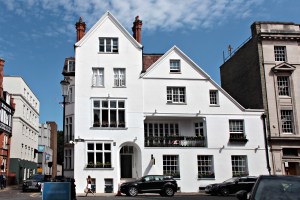 At the opening of the clinic, Khera and Griggs showcased a sampling of their offer including sensory therapy with chakra oils; bioresonance testing; cupping and yoga with Sadie Frost’s masters, Hortense Suleyman and Maya Fiennes. Frost herself showed off her new, eponymous yogawear brand, a sustainable collection done in colors inspired by seven chakras.

The clinic also has a sound-proof fitness studio meant for yoga, Pilates and meditation and offers services such as Deepak Chopra’s Inner Space Immersive Meditation Experience.

Urban Retreat also has a roster of doctors, therapists and specialists who plan to host residencies and practice at The White House regularly. They include the dermatologist Dr. Timm Golueke, founder of the Royal Fern skin-care line; three gynecologists; the facialist Clare Marie Peters and Pilates expert Gaby Noble.

In addition, Fekkai will be visiting London every few months to treat VIP clients and to host events, while his team at the Fekkai Atelier will keep the daily business running.

Fekkai was in London last week to host a lunch at Flavour and talk about some of his soon-to-launch products. One line of products that will launch early next year has replaced silicone with a 100 percent plant extract, and uses 100 percent recycled plastic packaging.

During the lunch Fekkai said he liked the idea of Urban Retreat’s 360-degree approach to beauty and wellness, and joked “maybe I’ll even leave here today with a tattoo.” 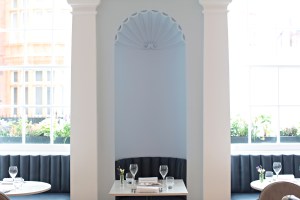 Urban Retreat is no mean feat. In an interview with his daughter Reena Hammer, Urban Retreat’s managing director, Hammer talked about wanting to fill a market niche and move beauty and wellness services into new territory.

“The whole idea of Urban Retreat was that it was everything for wellness and beauty under one roof, but at Harrods — like any other retailer — you’re not always free to do what you like. We often wanted to do things that just weren’t possible there, and we were also too big a business to have a concession,” said Hammer.

Hammer said he and the team lifted turnover to 15 million pounds from 3.5 million pounds in the 17-year period that Urban Retreat was at Harrods. Urban Retreat and Harrods parted ways following a contract dispute, with the two parties eventually agreeing on a settlement. Harrods has since opened up new wellness and beauty spaces in-store, and also plans to roll out a new stand-alone concept called H Beauty.

“Rather than being a lodger in somebody else’s house we wanted our own house, and when this building came up we thought it was perfect. Retail has to change. This is homemade, and it’s better than going into a salon,” Hammer said.

“People also want an experience and it’s what we’ve provided here. I think materialism and status is very 20th century, I think the 21st century is about less materialism, less status and more experience — and giving yourself time and space. Anyone can come here and have breakfast, lunch or dinner with friends — or they can have a glass of juice — whatever they want,” said Hammer, who made experiential retail his specialty long before it became a trend.

He was the man who created London’s first day spa, The Sanctuary, in the Seventies; brought aerobics to London after witnessing Jane Fonda’s success in the Eighties and was quick to offer Pilates and alternative types of massage to a curious British audience. He convinced Harrods to let him build a Moroccan hammam at Urban Retreat.

Hammer introduced and built up the Aveda and L’Occitane en Provence retail businesses in the U.K., invested in smaller brands such as Murad, Tweezerman and Philip Kingsley, and approached Joan Collins to create her Timeless Beauty range. In 2011, he received CEW U.K.’s Special Industry Award for the vast amount of work he did over the years to help build the U.K. beauty business into a 10 billion pounds-plus behemoth. 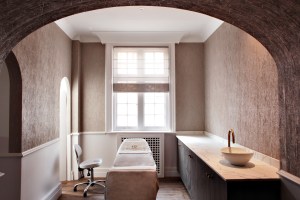 His investment portfolio includes property throughout London, The Mayfair Chippy high-end fish and chips restaurant and The Wedding Gallery, a one-stop wedding destination located at One Marylebone, offering retail, services and planning.

During the interview, Reena said it was important that the space cater to men as well as women. There’s a men’s barber on the ground floor, while most of the treatments, including hair transplant services, are unisex.

“Sometimes you just want to have a meeting with somebody — or coffee with your husband,” she said and was adamant that the space not feel “too girly,” serious or stuffy.

“We’re forward thinking, we’re about quality, and we’re actually here to give you energy,” added Reena. “That’s why the music is kind of fun. It’s got a little bit of that Seventies vibe, and you can walk around and talk, which isn’t always the attitude in a hotel spa.”

She added that the space will allow customers to undertake detox and cleanse programs without having to spend a week at a spa. She said it’s not only cheaper, but customers can also sleep in their own beds and don’t have to abandon their families if they need a temporary detox. 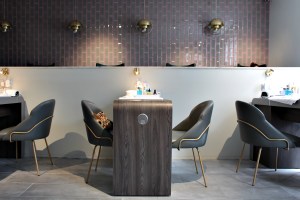 Some 70 percent of the clientele lives within a mile of Urban Retreat — which shouldn’t come as a surprise as Knightsbridge and its environs are some of the ritziest parts of London, with a mix of flush Brits and foreigners.

Over the next few months, Hammer said he plans to launch a line of branded products and has many other projects in the pipeline. Urban Retreat also stocks the eponymous Frédéric Fekkai range of hair products, in addition to The Pure Collection by The One Atelier Fekkai. It also carries the Bastide range of eco-friendly body products, which is owned by Fekkai and his wife Shirin von Wulffen.

Asked about his other ideas now that The White House is off the ground, Hammer said he’s got hotel concepts in mind and that “Urban Retreat would make a great hotel. I’m just waiting for the right hotel operators to come to me because I’m all ears.”

He’d also like to get his busy hands on a department store, too.

“I think they can be rejuvenated. I’d love for someone to get me a department store, and just let me do what I want with it. I would make it like no other store in the world. And people say things are dying! Look at fish and chips. The (Mayfair Chippy) restaurants are on fire. We reinvented fish and chips. We brought some life back into things. It’s about taking a fresh look.”