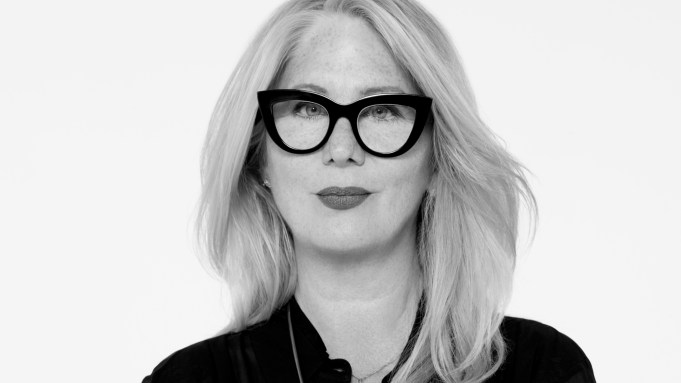 “This is something I can get my teeth [sunk] into,” she said. “I love the fact that as a brand there is a good price point, so in [that way] they do appeal to everyone. I’m very excited about getting into the lab and working with the team at L’Oréal.”

The self-taught makeup artist has created catwalk looks for fashion designers such as Giambattista Valli, Emanuel Ungaro, Alberta Ferretti and Erdem; images for the likes of Vogue, W and V magazines, and advertising campaigns for labels including MAC Cosmetics, Jimmy Choo and Topshop.

Garland, who was born in Birmingham, England, also served as artistic adviser for Yves Saint Laurent makeup — another brand in the L’Oréal fold — for three years starting in 2007.

Her beauty career began in 1979, when she was 17 and traveled to Sydney to be a hairstylist. Soon, she began doing lots of makeup-related work for magazines, the music industry (in which she realized pop videos early on) and the catwalk. Garland returned to England in 1994, when she moved to London.

Her versatile style runs the gamut from natural looks, with glowing skin to the avant-garde. As a trendsetter, she recently was credited with launching the “snogged lips” look at Preen by Thornton Bregazzi’s 2017 fall ready-to-wear show in London.

Garland has worked with celebrities such as Keira Knightley, Kate Winslet, Kate Moss, Sienna Miller and Natalie Portman. She’s collaborated with photographers including Mario Testino and Patrick Demarchelier, as well.

At L’Oréal Paris, Garland succeeds Karim Rhaman, who left the job after seven years. As global makeup director, she is charged with product development, as well as serving as the brand’s makeup artist ambassador for press conference and editorial work.

“I’m looking at ideas and innovations, and what the future holds in makeup and beauty,” she said. “I’m hoping to — through my experience of working on catwalk and editorial — be able to say how a product works for me or what I need from a product, or what my clients are looking for. I hope to bring that advice to the brand and together we can come up with some new great innovations.”

Garland will be attending the Cannes Film Festival later this month, where L’Oréal Paris is a sponsor. There, she will get the brand’s spokeswomen “red carpet ready,” hold interviews and give makeup classes.

“I’m going to be working with a new spokeswoman,” she hinted, without revealing further details.

“In bringing Val Garland’s incredible talent for newness to L’Oréal Paris and working directly with her in makeup innovation, L’Oréal Paris takes a new artistic direction, where our vision of Paris-born beauty is constantly reinvented,” said Pierre-Emmanuel Angeloglou, global brand president of the brand, in a statement.

For her part, Garland gleans inspiration for her trade from everything around her.

“It’s whatever you are looking at, surrounding yourself with,” she said. “There is inspiration in everyday things. I listen to music. I am a keen gardener. I love films. I love color, so it could be anything. There is beauty everywhere.”