Valentino Stops at Bergdorf’s for Lunch and Autographs

NEW YORK — Valentino may be rumored to be on the verge of retirement, but he showed no signs of it Tuesday afternoon at Bergdorf Goodman, where he hosted a lunch and made a personal appearance to celebrate the launch of his new fragrance,... 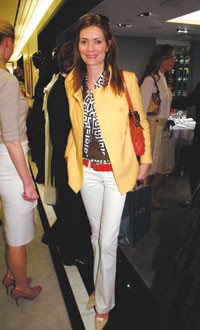 NEW YORK — Valentino may be rumored to be on the verge of retirement, but he showed no signs of it Tuesday afternoon at Bergdorf Goodman, where he hosted a lunch and made a personal appearance to celebrate the launch of his new fragrance, V.

Held on the retailer’s lower-level beauty floor, the personal appearance was the first Valentino has made for a fragrance in five years, spurring speculation of an increased focus on beauty for the legendary designer. “Yes, maybe,” he mused. “This fragrance is very important to me because I’m quite concerned with scent — I love the smell of flowers, of the bakery, of the garden. When you put this on your skin, it stays there for a long time without changing — that was very important to me.”

The event drew more than 200 fans, men and women alike, all of whom queued up patiently to get a signed bottle of the Oriental-floral fragrance (one woman walked away with seven bottles in total), which launched exclusively at Bergdorf Goodman and in Neiman Marcus that day. Though executives from distributor Cosmopolitan Cosmetics would not comment on sales for the day, industry sources estimate the appearance brought in up to $10,000.

Earlier, some of Valentino’s best customers turned out to fete the designer and sample the scent, including Jennifer Creel, Gigi Mortimer, Emilia Fanjul and Amy Fine Collins. The afternoon’s early bird was Tara Rockefeller, who mingled with members of the designer’s entourage for a good 20 minutes before the rest of her peers arrived. “I always love to catch up with [Valentino]; he’s such a charming man,” she said. A radiant Plum Sykes, who arrived nearly seconds before the first course hit the tables, declared, “It’s Valentino week,” referring to Thursday night’s party honoring the designer at the Four Seasons, which many of the ladies were gearing up for: When asked what she had picked out for the night, the whisper-thin Somers Farkas, replied, ironically, “Anything I can fit into.”

Later, Valentino touched on the changing face of fashion, with its chain retailer collaborations and increasing pool of celebrity designers. Elizabeth Hurley, who recently launched a line of swimwear, is a friend, after all, and he said, “Why not? She’s a girl, and she loves bathing suits. Maybe she thought it was a nice thing to move into, to at least have some occupation, to have something to do.” But not every industry trend meets with his approval.

“I am afraid that the world changes so fast, because if you go on like this, what you saw last week is already gone next week,” he said. “But I will not change because the world changes. It was always one idea for me — I believe in beauty, I believe in softness, romanticism and this is my way.”

So what’s next for the timeless designer? Certainly the “R” word is not on the tip of his tongue. “More collections!” he said, smiling. “After such a long time I still have the same enthusiasm. Sometimes I say, “You are totally mad just to think about clothes, you know, just to think about your job — there are lots of other things in life.’ But when I do my job it has to be done with enthusiasm. The day I have less enthusiasm, I will stand up and take a bow.”