From Runway to Wrist: Watches Hit the Shows

Designers are increasingly using luxury timepieces as high-end ambassadors of their collections. 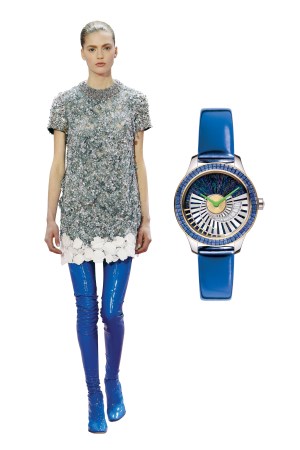 It turns out even timepieces are not immune  to seasonal trends.

Swiss watchmakers like to tout their wares as timeless antidotes to disposable fads, such as their current bete noire, the Apple Watch. But a growing number of fashion brands are seeking to bring runway influences to their customers’ wrists, without sacrificing any of the luxury and know-how implicit in the “Swiss made” label.

This story first appeared in the November 4, 2015 issue of WWD. Subscribe Today.

Louis Vuitton, Dior, Fendi and Burberry were among the brands presenting creations directly linked to their ready-to-wear or handbag collections at the Baselworld watch and jewelry fair, the industry’s premier showcase, which was held in Basel, Switzerland, last March.

In return, timepieces are increasingly carving out a piece of runway action. At Versace’s spring show in Milan in September, for instance, models sported watches in colors and prints that matched the military-inspired clothes. One of these, the V-Race chronograph model, to be launched in February, will be sold with two spare straps in patterns seen on the runway, priced $2,595.

“The final decision sometimes happens in the last five minutes before the [models walk], so even though you have prepared specific products for the catwalk, you’re not guaranteed they will come out,” he said.

Marai is sensing a growing interest from brands toward their watchmaking activities, whether handled in-house or produced through a licensee.

“Certainly, there is a kind of evolution. I think fashion houses have realized that watches are among the most luxurious things they can use to advertise the brand, so the more they’re capable of having the watches on the catwalk and in the advertising campaign, the more it gives a kind of luxury to the brand itself,” he said.

Marai said having a small assortment of seasonal models to complement its pillar timepiece collections helps drive sales in monobrand stores, which account for up to 30 percent of Versace’s watch volume.

“We see that sales are tremendously increased when the watches are displayed on the catwalk, so for us, it’s a really relevant tool for communication,” he noted.

Occasionally, brands include a timepiece in their rtw ad campaigns. When they do, the effect can be memorable: Think of a sultry Madonna in Versace’s spring ads, posing with her thumb in her mouth while sporting a chunky Dylos watch. Industry officials note that introducing seasonal elements is not always easy, since wristwatches typically have longer development cycles than rtw and handbags. In that respect, brands that produce their watch lines in-house have a natural advantage.

A case in point is Fendi, which has sharply upped the fashion quotient of its timepieces since absorbing its watch licensee Taramax in 2013.

“Each season, our product teams work closely together to convey a message enhancing our values and DNA,” said Pietro Beccari, ceo of Fendi. “We are always striving to reach new levels of craftsmanship and this willingness is shared across all categories. The teams in ready-to-wear, shoes, leather goods, accessories and timepieces are in constant communication.”

This season, its Crazy Carats collection features two models, priced at $7,800, with handmade shearling cuffs in geometric motifs that are directly inspired by the coats and bags featured in the current fall rtw collection. By making the bands removable, Fendi ensures the watches don’t have a built-in sell-by date.

Hamdi Chatti, vice president of fine jewelry and watches at Louis Vuitton, said while he enjoys the energy that comes from the fashion side of the business, it’s not always easy to translate to the wrist.

“If you can harness that energy, you can obtain exceptional products,” he said. “What you must not do, and what we don’t do, is just put out a so-called fashionable watch. It makes no sense. A watch is a timeless product.

“The challenge is how to bring in creative influences in a very short time frame, because the production cycles are not the same, and above all, how to succeed in capturing an essence, a style, using such a small surface.”

Chatti recently pulled it off with a men’s watch designed to complement the fall men’s line, inspired by London designer-artist Christopher Nemeth.

Although Kim Jones, men’s artistic director at Louis Vuitton, approached him only weeks before the show, Vuitton’s in-house workshop was able to turn out a three-dimensional engraved dial featuring Nemeth’s signature Rope motif. Produced in a limited run, the watches promptly sold out.

Still, matching timepieces to runway product remains an ad hoc process, Chatti noted. “If the next theme is not as easy to translate, or if the designer does not feel like it, we are quite relaxed about that kind of thing. There is no obligation.”

Indeed, with its constant revolving door of designers and executives, fashion is subject to stylistic upheavals that are anathema to the Swiss watch industry, where some brands have been producing minute variations on the same design for decades.

A recent example is Dior, which is searching for a new creative director of women’s collections following the surprise departure of Raf Simons.

The French house has made fashion a key differentiating factor for its high-end designs since 2011, when it introduced the watchmaking equivalent of haute couture through its Dior VIII Grand Bal and Dior Grand Soir timepieces, which use materials like feathers, embroideries and lace to evoke specific runway looks.

“It’s a real challenge to develop the techniques used to transpose the haute couture know-how into watchmaking. The process is long and complex and, as an example, it took several years to develop the Dior Grand Bal Cancan oscillating weight with its feathers,” said a Dior spokesman. “It’s a great advantage for the timepieces studio to share the same address as the haute couture ateliers on Avenue Montaigne. This allows us to be very responsive to create seasonal collections and to be very fast in production right after the shows.”

Just as well: The inspiration for next year’s collections is, at this point, anybody’s guess.