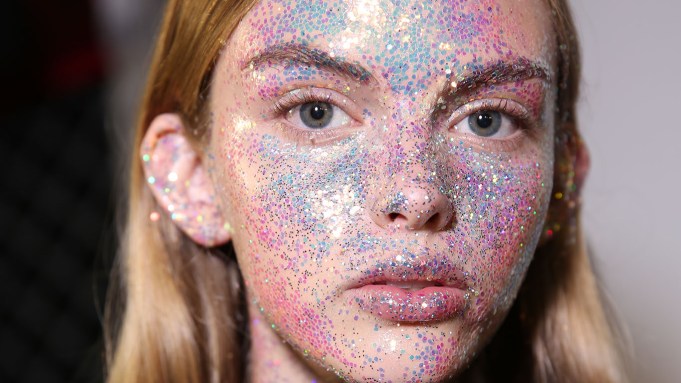 Natural beauty might have continued to hold sway on the Paris runways during the fall 2018 women’s wear season, but a handful of fashion houses opted for weird and wonderful looks.

Take the hair and makeup at Yohji Yamamoto. Hairstylist Eugene Souleiman said in keeping with how the brand’s fashion collection referenced Azzedine Alaïa and Pablo Picasso, the hairstyle for the show did, too. “We’ve tried to do something that has the feeling, the graphic-ness of cubism and [its abstraction] with the kind of sensuality and strength of a woman,” he explained. “The hair is asymmetric. There’s a round shape to it and a very soft square shape…and the head is very flat. Then there are really soft ends. So it’s something that is really quite graphic, yet also has a romance to it.

“What I love…is the textures that morph,” he added.

Pat McGrath created the makeup look for the show, which involved a white rectangle with black accents overlaying models’ left eyes and black markings drawn near their right ones.

At Giambattista Valli, Val Garland created what she described as a “magic moment,” when eight models appeared with faces incrusted with glitter. This was a nod to a Guy Bourdin photograph of a woman whose features are swathed in sparkling sugar crystals.

Other fantastic beauty creations included the red-ringed peepers at Aalto, gravity-defying coifs at Thom Browne and Comme des Garçons, and a trompe l’oeil bandana painted on to a model’s chin at Vivienne Westwood.

Over at Guy Laroche, smudges of black eyeliner decorated eyes and lips, whereas lips at Maison Margiela appeared in an array of offbeat hues, such as blue, green and orange. Ghostly white faces popped up at Rick Owens’ display.

For more on backstage beauty during the fall 2018 women’s ready-to-wear shows in Paris, New York, London and Milan see: