When fashion's pacesetters fuse their artistry with beauty's marketers and perfumers, the results can be as unexpected as they are captivating.

By Molly Prior on December 19, 2007
View Slideshow 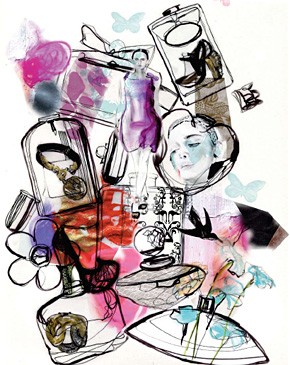 When fashion’s pacesetters fuse their artistry with beauty’s marketers and perfumers, the results can be as unexpected as they are captivating.

Forty years ago, enterprising beauty entrepreneur Estée Lauder bristled at the notion of putting the name of the fashion designer Emanuel Ungaro — or any name other than her own — on one of her company’s fragrance bottles.

That intractable position immediately unraveled her namesake company’s licensing arrangement with Ungaro to develop his first fragrance. Recounting the tale, Estée Lauder’s daughter in- law, Evelyn—the firm’s senior corporate vice president—says with a laugh, “That was our first foray into designer fragrances and it was an abortion.”

As Evelyn Lauder reminds, in the Sixties, the designer fragrance category—carved out in part by Bill Blass and his licensee Revlon—was a novel idea. It has since grown into a $1.93 billion piece of the $2.88 billion prestige fragrance market in the U.S., according to The NDP Group. After a deluge of celebrity scents over the last few seasons, designers are once again asserting their primacy at department store counters. This fall’s launch lineup includes Emporio Armani Diamonds, Daisy Marc Jacobs, Very Michael Kors, Vivara by Emilio Pucci, The One by Dolce & Gabbana, Prada Infusion d’Iris, Midnight Poison by Christian Dior, DKNY Delicious Night, Donatella Versace’s Versace and Gucci by Gucci, to name a few.

But ideas for designers scents don’t simply march off the runways. Behind each one is a team of designers in their own right. It’s this team of beauty marketers and perfumers who assists fashion designers — masters at sketching and sewing their artistic point of view into clothing — on how to bottle their aesthetic and personality into a fragrance.

By all accounts, creating a designer fragrance is an emotional process and sparks can fly when attempting to blend creativity and commercial considerations. But when the team of artistic collaborators get it right, fragrance offers a way for designers to broaden their audience beyond merely the deep-pocketed. It also extends the promise of brand longevity.

“Designers take fragrance seriously because it’s something that may be around longer than themselves,” says fragrance consultant Ann Gottlieb, who has worked on scents for Calvin Klein, Marc Jacobs and Oscar de la Renta.

The process requires a fashion designer’s fragrance team to be keenly aware of how to best elicit an idea from its subject, and play the role of diplomat should views clash. As Catherine Walsh, senior vice president of American Fragrances for Coty Inc., acknowledges, “Ninety-nine percent of my job is personality management. It’s about knowing who you are talking to and how they would like to hear things.”

For example? “There are certain designers in our portfolio who do not want to hear the word ‘commercial,'” Walsh says, “while there are others who embrace it.”

After the Ungaro episode, Lauder returned to the designer arena in 1993 by inking a deal with Tommy Hilfiger; today its portfolio also includes Donna Karan, Michael Kors, Sean John, Coach, Kiton, Missoni and Tom Ford. Describing the development process, Lauder says, “You get into a different vehicle with each person and you know what makes them tick. Each person has his or her own style, mission and concept. They use different words for what they’re trying to express. We try very hard to combine their dream with what we believe is commercially feasible.”

The process hinges on how well acquainted the development team is with the designer and his or her brand.

“The successful formula comes from working closely with the designer,” says Christophe Cervasel, founder and chairman of Selective Beauty, which in the last year has signed deals with John Galliano, Jimmy Choo and Zac Posen. “There is a magic moment when you say, ‘Yes, I have the idea.’ It’s like falling in love,” he says, adding it involves all the senses.

Some designers throw open the doors to their studios, homes and shopping habits to give their fragrance partners a wide-eyed glance into their world. For others, fragrance is simply one bullet point on a dense business plan, best managed by the category experts of its licensee.

Regardless of level of involvement, experts say the most successful scents go deeper than the clothes. “You can’t stay at the level of style,” says Veronique Gabai-Pinsky, president of Aramis and Designer Fragrances at Lauder. “The style is the expression of the vision, persona and psyche of the designer in the field of ready-to wear or couture. But you have to go deeper than that to find the emotions, values and beliefs behind it. Once you do, you’re able to translate them into a fragrance vocabulary.” Her deep dive into designers’ worlds has included a visit to Hilfiger’s Nantucket home, poring through books on Karan and traveling with Kors.

Describing the language of the Donna Karan brand, for example, Gabai-Pinsky says, “The Donna Karan brand is nothing short of iconic and timeless and the values behind it are very deep. It is all about the contrast between sensuality and spirituality. It’s about body and soul and black and gold. Everything about it is extremely timeless.”

Turning to her vocabulary for Kors, she notes, “Everything that Michael does exudes his taste for ultimate luxury and indulgence.

“I was truly impressed by his take on luxury and his sense of humor,” she continues. “At the same time he brings glamour to our world, he’s always doing it with a wink and that gives enormous appeal to the brand.”

Coty’s Walsh, who has created scents for Marc Jacobs, Vera Wang and Kenneth Cole, agrees that while fashion is generally her first touchpoint with a designer, the process begins in earnest only after she’s asked the designer a host of questions. She employs a variety of ways of mining inspiration from the designer. For instance, while working on Marc Jacob’s second fragrance, Blush, she asked Jacobs what olfactive scents he was thinking of for the project. Jacobs responded that he was inspired by the jasmine that blooms outside of his window in Paris—which was subsequentally re-created for the fragrance.

“I’m not inside their heads and I never want to pretend to be. The runway is a big dramatic event. It’s when a designer unveils his vision,” Walsh says, adding that clothes have a store life of one season. In Walsh’s view, her job is to create a fragrance that has staying power on department store fragrance counters season after season, for years to come.

Walsh says that pragmatism prevents head-butting over ideas and concepts. “I’m not in this for my own personal aesthetic. I’m there to channel their aesthetic and ask enough questions to give them something that they want that is also appropriate for the fragrance market.”

Franck Salzwedel, Selective Beauty’s U.S. creative director, says that when designers come to him with an explosive idea, he gives them ample opportunity to express themselves. “Sometimes the designer provokes us, but other times it’s important to tell the designer we haven’t pushed the limits enough. The key is being as close as possible to the designer, while keeping a certain distance to make a decision.”

Salzwedel, who is currently developing Zac Posen’s first fragrance with Firmenich, says that a recent visit to the young designer’s Manhattan apartment allowed him “to put one foot in Zac Posen’s private universe.” Salzwedel expected to find a minimalistic decor, but instead found the opposite.

“I discovered a world full of soul and authentic objects with a story, a voice and a curiosity. [Posen has] the mind of a collector and the eye of a fine aesthete,” says Salzwedel, who prior to Selective Beauty created the Viktor & Rolf fragrances for L’Oréal. He adds that Posen’s home was filled with souvenirs from all around the world, staged together with a sense of drama and lots of spirit. It also showcased some contemporary art pieces and photographs. Wood and flowers were omnipresent, says Salzwedel. “Everywhere, there were fresh-cut flowers put together in splendid bouquets. It was very cozy, warm and welcoming.”

Some fashion designers never meet the perfumers behind their project, but Posen sat down for a three hour meeting with Firmenich. The fragrance house’s master perfumer Harry Fremont says he was happy to discover that he and Posen share an interest in gardening. “He likes white flowers with an exotic feel. I can already see a very feminine fragrance with a playful side.”

Tom Ford, too, is known for his close involvement in the development process and his meticulous attention to detail. “Tom has such a strong signature style. He is direct and knows what he wants. He has a strong archival sense of history related to fragrance,” says Andrea Robinson, president of Tom Ford Beauty. “He’s so informed about the past, and knows how to bring it into modernity.”

Robinson explains that when it comes to fragrance, Ford begins with a reference point. For instance, Ford’s fondness for the Sixties and his propensity for pinning a gardenia to his dinner jacket served as the inspiration for two fragrances in his Private Blend collection, namely Purple Patchouli and Velvet Gardenia. It seems that where Ford goes a dose of drama and controversy are sure to follow, and fragrance is no exception. This summer, word began to spread that the Tuscan Leather scent from Private Blend smells like cocaine. Robinson laughs off the comparison, and says flatly, “No fragrance was developed with cocaine in mind.”

Confident in their olfactive abilities or not, though, all designers rely on the perfumer to translate their vision and concept into liquid form. “Designers are looking to have themselves personified,” says Givaudan perfumer Ellen Molner. “No one knows an artist better than another artist.”