Millennial makeup brand Winky Lux is gearing up for its next whimsical experience.

The brand, which houses items in floral packaging and makes products like Disco Gloss ($14), is readying to open a series of stores that take the experiential aspect of Instagram-friendly adventures like 29Rooms, Dream Machine or the Museum of Ice Cream into retail.

The first Winky Lux Experience Store will open Aug. 8 in New York at West Broadway and Prince, and stay open for six months. Tickets, $10, go on sale today on the brand’s web site. Winky Lux is planning for between five and 10 people to go through the space at a time to avoid overcrowding, and buying a ticket reserves one’s place in line, Mackey noted. The $10 can be redeemed in the retail component of the store for products. That retail section is open to all — tickets or no tickets — for shopping.

The site will feature seven rooms that combine products with experience. One, for example, pairs Winky Lux’s Matcha Balm with a Matcha Zen Garden. Other experiences include a giant lemon juicer — Winky Lux makes Pucker Up Lip Plumper in Pink Lemonade, $16 — and a room filled with K-pop and disco balls.

“It’s a different way of telling product stories,” Mackey said. “I’m not that inspired when I walk through a beauty store…it’s only been in person, why someone’s been able to tell me why a product is fun or important.”

Opening such a visual experience should allow the brand to “leverage the virality of people’s Instagram accounts,” Mackey said. “We’re looking at impressions and awareness as our top [goal], but we believe we can sell quite a bit of product.”

The SoHo, Manhattan, location is the first step in a rollout plan. Winky Lux is planning to rollout four other experience stores — Chicago and Atlanta are slated for September, and Miami and Nashville are slated for October.

“Experiences haven’t hit the other cities yet,” Mackey said. “There’s a ton of customers who are really important in those markets who would be really excited to come experience a whole world.” 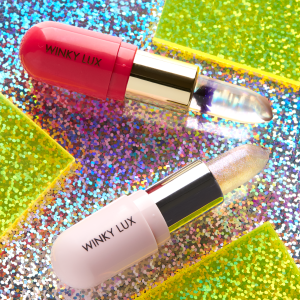 For Winky Lux, the experience stores aren’t the brand’s fist step into experiential retail. The brand operates a store on Ludlow Street in New York that is built around Instagrammable moments, like a flower wall, and that has beauty influencers stop by and film tutorials. That store opened in 2017, shortly after the brand raised $2 million from investors including Female Founders Fund and TGZ, the fund of influencers Cameron Dallas, Patrick Finnegan and Jake Paul. Industry sources estimated the brand is on track to do around $15 million in sales for 2018.