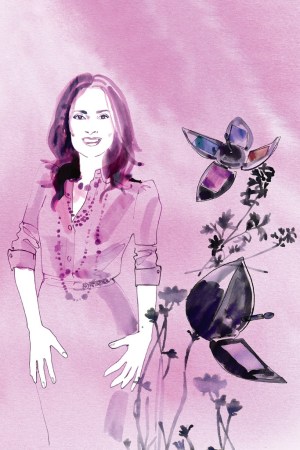 MASS
NUANCE
SALMA HAYEK
Actress-director-producer Salma Hayek isn’t one to do things halfheartedly. So it only makes sense that when she decided to make her first foray into beauty, a simple celeb scent wasn’t the route for her. Enter Nuance Salma Hayek, a 100-plus stockkeeping unit line of skin care, hair care, body products and makeup that launched in August exclusively in 7,000 CVS doors. Nuance is based on ingredients used by her grandmother, a trained cosmetologist, as well as Native American and Mayan remedies, and Hayek was extraordinarily hands-on, personally involved with the formulation of each product.

A self-admitted control freak, she laughingly noted at the launch, “I am not easy. [The labs] have been very patient with me. I mean, I am a double Virgo.”

The persistence paid off — consumers clamored to the line. And as the Oscar-nominated Hayek can attest, everyone loves a happy ending.

PRESTIGE
TOM FORD BEAUTY
Tom Ford brought his maximalist sensibility to bear on beauty this year, with the launch of a 100-plus stockkeeping unit line of makeup and skin care. Like everything Ford does, the line was glamorous, sexy and firmly ensconced in the luxury arena, with prices ranging from $30 to $250. At the launch, Ford described his creative approach as practical and architectural, and that certainly holds true when it comes to how he is building his beauty business. Thus far, industry sources report the brand has sales of $150 million globally, comprised primarily of fragrances, a number which is expected to grow to $400 million to $500 million in the next five years. Ambitious, to be sure, but women respond to Ford’s vision, which includes statement-making, saturated colors with names like Lost Cherry and Bitter Bitch: During a personal appearance at Bergdorf Goodman, Ford sold a reported $52,000 worth of products.

Said Bergdorf ’s Pat Saxby after the event, “It was one of the biggest events in Bergdorf ’s history.”