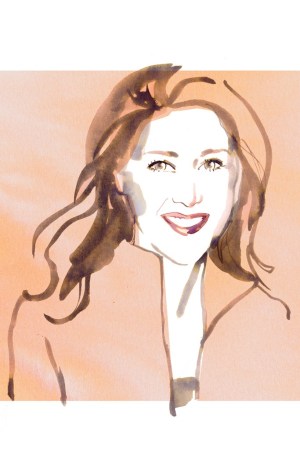 Julia Goldin’s multifaceted talents have helped push Revlon into the spotlight in 2011. As chief marketing officer, Goldin has had a manicured hand on every facet of the business, from ushering in a new creative direction for the Revlon brand to orchestrating one of the biggest new product debuts of the year. The 360-degree campaign for Revlon Grow Luscious Plumping Mascara included a T.V. commercial directed by Academy Award–nominee Darren Aronofsky that premiered on the Times Square Jumbotron. Under Goldin’s guidance, Revlon’s stable of global brand ambassadors also grew in 2011 as the brand signed two of Hollywood’s hottest actresses — Emma Stone and Olivia Wilde. Goldin, who joined Revlon after rocketing to the top of the Coca-Cola Co., oversees not just marketing but also product development, and this year several new products displayed a newfound focus on innovation, including the first-ever Revlon collection under makeup artist Gucci Westman’s name. Goldin has also implemented a company-wide renewed focus on global markets to ignite Revlon around the world, especially emerging markets.

Alexander Bolen knows that in the world of style, perception is reality. And when it came to fragrance, the chief executive officer of Oscar de la Renta recognized that he had a problem.

So Bolen, a fashion industry veteran but a newbie to beauty, did the unthinkable and brought the brand’s fragrance operations in house. (Bolen remembered that even De La Renta took some convincing, asking him, “Are you nuts?”) Crazy as a fox, it turns out. Last spring, De La Renta reentered the fragrance arena with an updated version of his classic scent called Esprit d’Oscar, then followed it up with the launch of a new franchise, Live In Love, in October. The new scent generated an estimated $25,000 in sales during a personal appearance of the designer at its launch at Lord & Taylor, an auspicious beginning that marks a new era for the company.