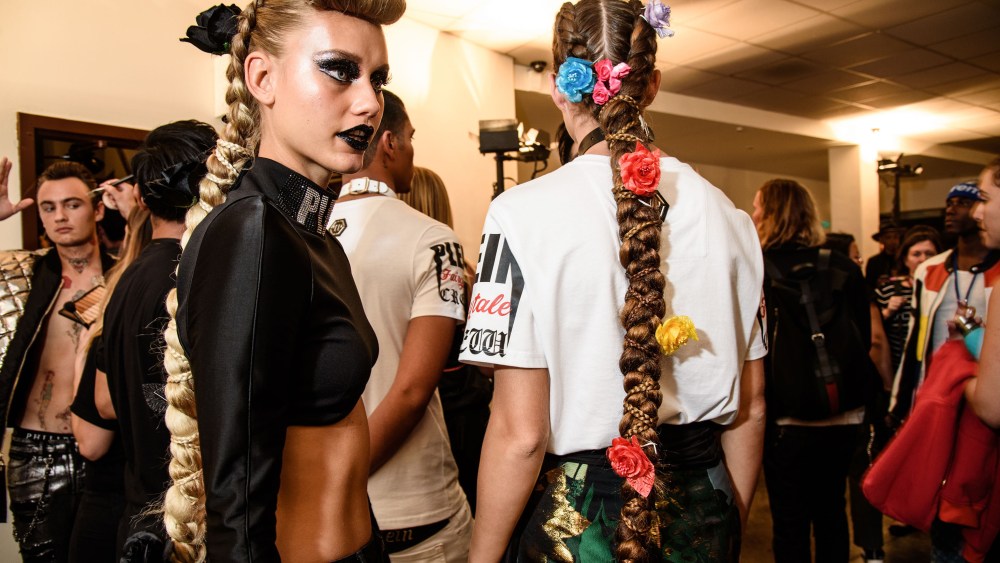 Models at Philipp Plein were fitted with yards of extensions that were tied into Rapunzel-esque braids that went past models’ knees. Another set of extensions was tied into a separate braid, and woven along the main plait, with fake flowers attached.

“Because it’s heavy, the length needs to be added from the top,” said Tina Outen, who led the hair look for the show. Models designated as good girls had colorful flowers attached to their hair, while those classified as bad girls wore black flowers.

At Chromat, hairstylist Kien Hoang created a braid inspired by a volcano, he said. Two pulled-apart braids framed model’s faces, with a third tucked into a midheight ponytail. “What we wanted to do was do a braid, but it’s really about the direction of the braid, where it’s almost like a volcanic situation into a tight-fitting cornrow, and then afterwards we’re going to pull and roughen up the braids so it’s nice and airy and roughened up — as if the volcano has had an explosion.”

Models at Jill Stuart also sported braids that were almost hidden amongst waves.

On the other end of the hair spectrum, slicked-back strands have emerged as a runway trend.

Models at Creatures of Comfort had something that hair lead Justine Marjan for TRESemmé described as “sweaty” — it included lightly slicked-back, tousled hair.

At Jason Wu, Holli Smith for TRESemmé used the Keratin Smooth Mask and Keratin Smooth Shine Serum to give hair a wet look. Girls’ hair featured a deep side part, and was slicked back off the face. The overall look was meant to look wet rather than slick.

Wet was also the theme at Prabal Gurung, where Anthony Turner for Wella employed a healthy serving of Sculpt Force Gel to make models appear as if they’d just emerged from the water.

“It’s a very sexy look,” Turner said, after completing the hair of model Gigi Hadid. “It’s meant to kind of look like she’s emerged from a swimming pool and combed her hair back — it’s got that Nineties feel to it, could be Eighties I guess, but Nineties essentially. It feels very minimal in the way it looks, but ultimately this hair’s quite sexy.”

To get the look, Turner misted hair until it was damp, put in the gel, and combed sections with a wide tooth comb. The comb marks were meant to stay in place, he added. The bottom of hair was turned with a Hot Tools iron, and then misted with Glam Mist — a spray oil — to make sure the lengths of the hair didn’t look too dry.