YSL Puts a New Scent in the Picture

The fall launch YSL Beauté’s new women’s scent, called Cinéma, is a critical chance for the fashion and beauty trailblazer to reassert itself. 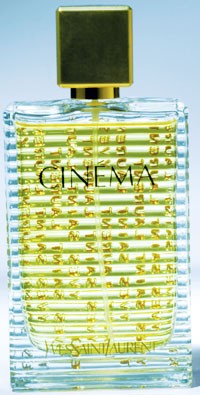 NEW YORK — YSL Beauté’s new women’s fragrance, called Cinéma, is designed to shine with the glitter of light and the dazzle of celebrity. Its launch this fall is also a critical opportunity for the venerable fashion and beauty trailblazer to reassert itself in the crucial women’s fragrance market.

“It’s key for us,” said Chantal Roos, chairman and chief executive officer of YSL Beauté, who took the helm four years ago with the mission of restoring the luster of YSL’s beauty business after it was acquired by Gucci Group.

Cinéma is designed to fill the bill. It will be launched in the U.S. on Sept. 12 with a two-week exclusive break at Saks Fifth Avenue before rolling out Oct. 1 to a total of 211 department and specialty store doors that carry YSL’s makeup and treatment line, as well as its fragrances. The scent will make its debut in the rest of the world Oct. 1.

This will be the first launch in the last four years that will be powered by a TV commercial, which was produced by Jean-Baptiste Mondino, who also shot the print advertising. Although YSL declined to break out budgets or projections, industry sources estimate the fragrance could do 40 million euros, or $49.5 million at current exchange, at wholesale globally for the first four months from launch to the end of YSL’s fiscal year. More than 20 million euros, or $25 million, reportedly have been earmarked for advertising and promotion. In the U.S., since distribution is so tight, the share of global volume is estimated at about $6 million retail. About half that amount is expected to be spent in advertising and promotion. The U.S. media plan includes four or five national magazines.

In its position and formulation, the scent represents a bold evolutionary step in the history of the YSL fragrances, which always celebrated women in all of their seductiveness. “Today, what makes women dream is a star,” Roos said, acknowledging that Saint Laurent had dressed Catherine Deneuve throughout her film career. “Every woman wants to be desirable, every woman wants to see how beguiling she is in the eyes of men.” She added, “A star is glittering, it’s dazzling, it’s all about light.” Also, Roos noted that movie statuettes are always made of gold.

Hence, a perfume bottle made of gold-colored metal, bearing the letters YSL in raised script running along the surface. The glass eau de parfum bottle also has raised script running along the back with the name in gold leaf on the front. The packaging was inspired by a piece of jewelry made by Line Vautrin, a Parisian sculptor who worked in the Fifties and was known as “the poetess of metal.” YSL acquired the rights to her jewelry designs.

The fragrance, created by Jacques Cavallier of Firmenich, is somewhat of a departure for YSL, which always has been known for sensuous scents. Roos described one aspect of the formula as “a sunny scent in a bottle.” It is a sensual, transparent floral with top notes of clementine, almond tree blossom and cyclamen. The departure is in the “fresh and happy” elements. The heart is floral with “sunny and spicy” notes. Amaryllis adds the sunshine, while sambac jasmine provides “sensuous texture” with a little peony added. Sensuality is accentuated by the drydown of amber, white musks and bourbon vanilla.

In addition to the 30-second TV commercial, which has been scheduled for Europe, there will be a 45-second version for showing in theaters.

The use of TV now not only underscores the importance of this launch, but also demonstrates that the business has grown healthy enough in the past four years to support it. Roos said that in 2001, when she and then-creative director Tom Ford launched Nu as YSL’s first stab at a fragrance comeback, the resources were not available for a major electronic advertising campaign. “Now we have improved,” she said, “and have done a lot of things that were needed.”

Cinéma was a project that was coming to fruition last spring as Ford was leaving Gucci. Roos credited him with providing the initial impetus for the direction of the fragrance’s development.

Roos was candid about the need for Cinéma to do well. The house has made headway with its color cosmetics line, rising to number three in France, according to market tracking firm Secodip, for the first half of the year through June 30. That put the brand ahead of Chanel, she noted. And the men’s fragrance category has done better than expected. But Roos indicated that YSL still doesn’t have a strong enough foothold in men’s to suit her, and she wants to deal with that issue after tackling the women’s arena.

“YSL has always been strong in women’s fragrances,” Roos declared. “This is where we have to show the world that we know how to use our know-how.”

She admitted, “We have not been able to demonstrate our know-how in women’s fragrance. We lost a little bit of ground.”

In the U.S., management and marketing consultant Allan Mottus noted that Nu “didn’t do well.” He maintains, however, that YSL has made such strides under the previous U.S. president Alain Denoly in cleaning up distribution and putting emphasis on color and skin care, that the stage is set for a comeback. “If she gets a big one, she’ll be back in the game,” he said.

Dianne Barber, senior account manager of NPDBeauty, agreed with Mottus that YSL’s makeup and treatment business is doing well in the U.S. In fact, she asserted, “the company overall is doing well.”

Denoly’s successor, U.S. chief executive and managing director Maggie Ciafardini, is now prepared to pick up the pace. While the possible use of TV in the U.S. is still being discussed, she is moving ahead with plans to promote the launch with magazine advertising complete with scented strips. There also will be heavy sampling. She said her strategy is “to put the fragrance on a pedestal.”

In Europe, the launch will be backed with scent seals and even billboards. Roos is aiming to land in the top five of doors where YSL does business in its foreign markets and in the top 10 in the 211 Beauté doors in the U.S. The brand is distributed in only 15,000 doors around the world.

Roos senses that the wind is shifting in YSL’s favor. The new Boucheron fragrance, Trouble, that the house launched earlier this year, is selling “way above budget.” The new Oscar de la Renta fragrance looks promising. And now comes a new YSL fragrance showing all the glitter of gold.