David Yurman to Launch a Trio of Scents

The Essence Collection is meant to evoke the characteristics of pink tourmaline, peridot and citrine. 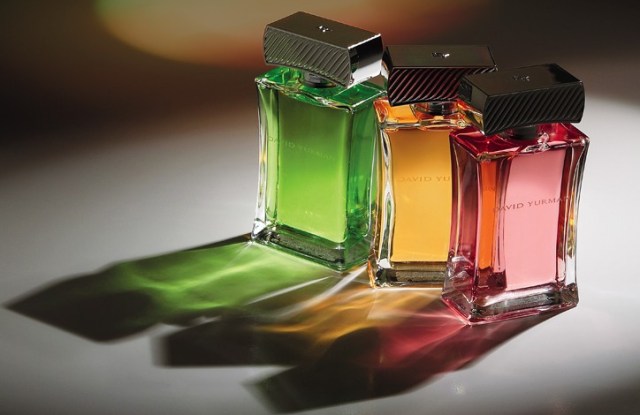 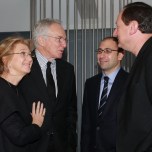 David Yurman is building a fragrance business like stringing together combinations of different colored gems.

That is some of the thinking behind his latest effort, The Essence Collection, a trio of fragrances meant to evoke the characteristics of pink tourmaline, peridot and citrine.

During a recent presentation, Yurman, chairman of his jewelry and timepiece firm, observed that the colors of gemstones carry “an emotional reference.” He also observed that a brand identity is formed by the fire of the hardness of the stones and the energy and heat of the colors, and the fragrance positioning is an extension of that jewelry branding process. He spoke of the connectivity of color, passion and scent. At one point, Yurman remarked, “it has to make the heart take a little skip.”

The three new fragrances, which will be launched in a first wave in early February at Bloomingdale’s, in Yurman’s stores and on his Web site, were developed by Harry Fremont, the master perfumer of Firmenich who also crafted the formula for Yurman’s original, 2008 signature scent. By correlating different fragrances with various stones, Fremont alluded to Yurman’s design aesthetic of creating jewelry to be worn in combination or standing alone. He also borrowed elements of the original fragrance to create the new ones. “The fragrances have a common thread allowing them to be able to be mixed and matched, like people wearing jewelry,” he said.

The amber-colored Exotic Essence, which is meant to symbolize citrine, is classified as a modern sensual oriental and features notes of creamy vanilla absolute, radiant amber and lucid Australian sandalwood to add mystery. Musk and peach skin were added for a touch of sensuality. A hint of Casablanca lily melded with rose petals forms a heart enhanced by patchouli and exotic woods. Sparkling mandarin was added to give the formula an edge.

The third fragrance is called Delicate Essence and is described as a modern floral, inspired by tourmaline. Pink pepper, lotus blossom and sparkling orange are the top notes. Pink peony blossom, wild rose and rose absolute are in the midrange, while sheer amber, blonde woods and skin musk form the drydown.

The fragrances will be retailed for a suggested price of $85 for a 3.4-oz. eau de toilette spray.

Jonathan Zrihen, president and chief executive officer of Clarins Groupe USA, Yurman’s licensee, said the early round of spring launches will be followed in the fall by a second wave, including Nordstrom, Saks Fifth Avenue, Lord & Taylor, Belk’s, Von Maur and Dillard’s. Overseas distribution will include Holt Renfrew in Canada. In the Middle East, the fragrances are expected to be carried by stores in Saudi Arabia, Bahrain, United Arab Emirates, Qatar and Oman. In France, the collection will be carried by Printemps and by Mercury in Russia.

As with the original fragrance, the distribution will be kept very limited and exclusive with an eye toward nurturing the franchise. None of the executives would discuss numbers, but industry sources speculate that first-year retail volume would amount to $5 million, climbing to $15 million worldwide after three years.

Zrihen added that the original fragrance has done well, placing in the top 10 at launch in most doors of its extremely tight distribution. The scent still ranks in the top 20 in many stores, he added.

Fremont noted that a priority was put on working with high-quality materials in creating scents, an increasing rarity in the market these days. “They never worked with a restricted budget,” Zrihen added, referring to Yurman his wife Sybil, who is president and chief marketing officer.